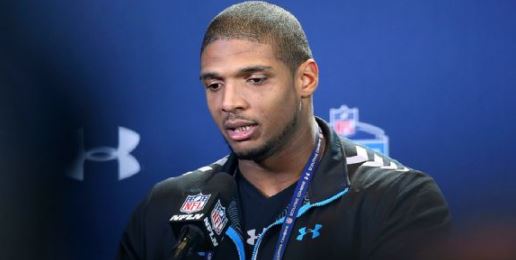 The NFL is celebrating the sexual equivalent of a brain concussion by going gaga over Michael Sam’s sexual proclivities.

As I predicted on my radio show, the NFL pressured somebody into drafting the out-of-the-closet Sam, whose combine performance revealed that he is not big enough and strong enough to play defensive line in the NFL and not fast enough and quick enough to play linebacker. In other words, if he were not an open practitioner of the infamous crime against nature, he wouldn’t have gotten drafted at all.

Sam didn’t go until the 7th-from-the-last pick, at #249. I predicted that he wouldn’t be drafted until late, because of his obvious limitations, but that he would be drafted because the NFL was determined to keep the Gay Gestapo off their backs. They knew the entire league would be tagged as a bunch of homophobic bigots if Sam wasn’t picked, and the NFL long ago lost whatever testosterone they once had that might have enabled them to stand up to the bullying of homosexual activists.

But I knew he wouldn’t be drafted dead last, because that guy is always nicknamed “Mr. Irrelevant.” So #249 it was. Sam became the first 7th-round draft pick ever to get a call from the president of the United States, and the president wasn’t calling him to congratulate him for his football prowess.

Dolphins safety Don Jones has already – already! – been fined by the NFL and sent to reeducation camp for sending out critical Tweets of Sam’s sloppy wet kiss for his gay lover, the photo of which was plastered all over the top of Drudge on Sunday. Jones won’t be allowed to return to the team until his lobotomy is complete.

For a league increasingly priding itself on concern for player safety and health, it is bizarre that they are enthusiastically praising a draftee for a lifestyle that could send him to an early grave.

The NFL has already spent $765 million in compensation to former players who suffered concussions during their careers, and are limiting helmet-to-helmet contact in such a way that the league will soon be reduced to flag football, all in the interest in player health.

This makes their fluttering hysterics over Sam inexplicable in a sane, rational world. According to the Centers for Disease Control – not, you will note, a part of the vast rightwing conspiracy – young black males comprise the single highest risk category for HIV/AIDS.

While the CDC reports that 78 percent of all new HIV infections are among males, primarily those who have sex with other men, HIV/AIDS is taking a monstrous toll on young males in particular. According to the CDC, more than a quarter of all new HIV infections in the U.S. are found in young males between the ages of 13-24, particularly in young males between 20-24, the category into which Sam falls. In fact, young men are the only age group in which the rate of HIV/AIDS infections is showing a significant increase.

Despite the fact that blacks comprise just 12 percent of the population, blacks who are Sam’s age represent an astonishing 57 percent of all new cases among young males. There are more new HIV infections among young black males (aged 13-24) than any other age or racial group, period. Alarmingly, the estimated rate of new HIV infection for black males is eight times as high as that of white men.

In other words, as a young, black, homosexual male, Michael Sam is in the single highest risk category for HIV/AIDS that exists on the planet. The NFL should be warning him, not glorifying him.

According to a study published in the peer-reviewed International Journal of Epidemiology, again not a part of the vast rightwing conspiracy, active participation in the homosexual lifestyle will cut anywhere from eight to 20 years off a male’s expected life span. The NFL is extolling behavior that may well turn out to be a death sentence for this young man.

If the NFL possessed one ounce of genuine compassion instead of the ersatz kind that exalts what should be condemned, they would be meeting privately with Michael Sam to urge him, in the strongest possible terms, to pursue reparative therapy in the hopes of saving his life.

Alas, the only people who truly care for Mr. Sam are those who love him enough to tell him the truth about the health risks of homosexual behavior – and that sadly does not include the leadership of the NFL. They long ago sold their souls to the virulent, vitriolic bullies and bigots of Big Gay. But it will be Michael Sam who pays the price for their soulless cowardice.