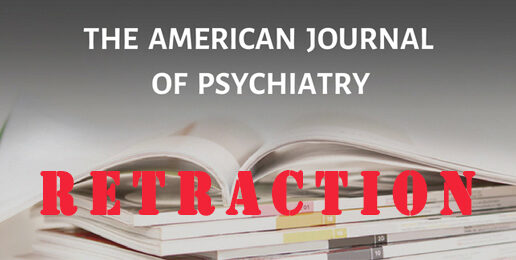 It’s hard to overstate the importance of the recent correction by the American Journal of Psychiatry of a landmark study purporting to demonstrate mental health improvements of “transitioning.”

According to Dr. Mark Regnerus, who analyzed the data,

This is not, contrary to what Bränström [lead researcher] told ABC News, an evidence-informed treatment. That the authors corrupted otherwise excellent data and analyses with a skewed interpretation signals an abandonment of scientific rigor and reason in favor of complicity with activist groups seeking to normalize infertility-inducing and permanently disfiguring surgeries.

In its conclusions, the study claimed hormones had no effect on mental health. The researchers also claimed, however, that SRS (sex reassignment surgery) benefited the mental health of patients. Regnerus explains:

If this were a clinical trial seeking to establish the efficacy of a particularly invasive medical treatment in comparison with a non-invasive standard protocol, there is no way that these published results would favor the invasive treatment—in this case, “gender affirming” surgery—when the statistical difference in outcomes was so tiny and fragile.

Almost a dozen doctors in the U.S., U.K., and Sweden sent seven letters recently published in the journal. These doctors demonstrated the claim of positive mental health outcomes was not merited.

Glancing through the headlines, the readership of Newsweek, NBC, and the New York Daily News would surely be satisfied that whatever risks are entailed via “transitioning” may well be justified.

Since most prior studies indicate poor mental health outcomes, the press fanfare reveals how little research  journalists did.

In recent months, the Yale imprimatur lent credence to an especially urgent demand for trans-affirmative healthcare during the pandemic.

As it turns out, however, there is anecdotal evidence many young people desisted while under less constant reinforcement of “transitioning” propaganda. One Reddit user reflected on her break from a social network that affirmed her “transition”:

I detransitioned over the lockdown period and think that the loss of constant positive affirmation of my transmale identity by friends/strangers definitely contributed to me realising that my transition was more tied to outside influences than I previously realised. When I was around others I was constantly praised and looked up to for being trans—being alone helped me uncover and look into that feeling of ‘wrongness’ that’d started to nag at me since permanent T [testosterone] changes had began.

The study design did not initially include assessment of health outcomes for those who, from necessity or choice, did not go through with medically and surgically “transitioning,” After the response led researchers to recalculate, their results showed no difference in outcomes.

Moreover, psychological treatments similar to what is known according to the misnomer “wait and see”  model (actually an active talk therapy model demonstrated as successful by Dr. Kenneth Zucker) did not figure into the study. Surely it is important to examine what treatment paths might have led specifically to desistance, especially given the increasing number of therapy bans that make it dangerous to use talk therapy in response to gender-confused youth and adults.

It’s worth wondering how many online readers will realize the study’s conclusion was retracted. A reader without a medical background likely is unaware of the errors in basic calculations that led to the study authors acknowledging their conclusion was unmerited. Why did the peer review process overlook vested interests, motivated research methods, and in at least one instance, misrepresentations of data?

Why is the American Journal of Psychiatry continuing to maintain on its publication site a discredited study sponsored by donors who back LGBT causes, thereby causing a conflict of interest? Lobbying in the form of endowments provides academic cover of objectivity. Yale, in particular, has huge financial incentives from the Pritzker family, the Arcus Foundation and LGBT-dedicated alumni donations.

A few decades back, A.J. Reynolds sponsored research finding health benefits from cigarette smoking. Unsuspecting onlookers now as then are likely to take the study claims at face value.

Such financial ties incentivize research conclusions favored by donors and require up-front disclosure on the American Journal of Psychiatry website. Regarding such studies, Julian Vigo observes:

What this means, when you sift through the bios of the principal investigators and many on the advisory board who hold seats on other granting institutions, editorial committees, and institutional seats of great power, is this: that an enormous amount of money has been thrown at academics who are using public funds for political activism within a dishonestly formulated project.

Not just the publishers of such research but professional organizations as well are to blame for mainstreaming bogus research on “transitioning.” In at least two instances, professional medical organizations amplified the false benefits claim and basically continue to carry water for the “trans” lobby by further nesting and codifying transitioning within established practice.

The Butterfly Effect of “Trans” Advocacy in Research

Within months of the Yale study being published, systematic embedding of “transitioning” as best practice in “trans” healthcare began. This butterfly effect is seen in the ways professional associations dovetailed guidelines to fit the 2019 study.

Just two months after the Yale research appeared, the AMA issued a statement in support of “transitioning”:

At the very least, the AMA needs to issue a correction. Dr. Mary Davenport, OBGYN writes:

This is a very serious error. It caused the AMA to state that surgery was an important treatment for gender dysphoria, and that justice requires insurance and the military to pay. (comment on social media).

It wasn’t just the AMA, however, that extended the butterfly effect of the Yale study.

Despite its being fully discredited, the erroneous claim is updated by links to the journal’s correction, but it is still essentially being propped up by the APA. Initially hidden behind a paywall, the correction was virtually unseen and unavailable to online readers who still are likely to assume the APA underwrites or even champions the biomedical approach. Put plainly, the corrected publication now finds that neither time on hormones nor SRS surgery improves mental health outcomes. Yet this information is not clearly stated on the APA’s “update” page.

Additionally, while the APA links to the journal’s statement, it is written in academic jargon for specialists who know their niche area, not a general readership, which can still gloss the headline as legitimizing transitioning. Even for medical generalists, the continued posting of the study is misleading and harmful. Dr. Quentin Van Meter, a pediatric endocrinologist, commented in a recent conference presentation that most doctors are too busy to research information about new developments in care and rely on guidelines often drafted within small work groups by activists.

Clearly, both the journal and the professional associations are minimizing the study’s shortcomings in a way that deliberately misleads.

Helena, who is a re-identified woman, sums up how reframing of data to show positive outcomes undermines the trust patients have in medical institutions:

[T]here are a multitude of reasons why the unquestioning acceptance of these interventions as “care” is both ethically and scientifically flawed. It is true, and will always be true, that people who identify as transgender should receive support as well as proper, evidence-based, mental and physical healthcare. The issue is that as it stands today, the trans healthcare industry, and increasingly the institutions of the broader medical establishment (including the World Health Organization, the American Academy of Pediatrics, the American Psychological Association, and the Endocrine Society, among others), have broken away from the traditional standards originally set by rigorously developed medical ethics and the scientific method.

Inescapably, academic standing is undermined by the simultaneous effort to avoid public scrutiny. Public confidence can only be restored by a full retraction, including removing mention of the study from online publications and websites.

As an inflection point in the activist normalization of medical “transitioning,” research not only informs but directs healthcare policies and standards. The butterfly effect extends to teaching materials provided to doctors as part of continuing education requirements. For instance, the study was quickly repurposed as CME, (Continuing Medical Education) and turned into a key class that U.S. physicians take to keep their license. The course teaches physicians that “The findings support the decision to offer surgery to transgender individuals seeking it, as well as policies that ensure coverage for surgery” (Posted on Twitter by SEGMtweets). This statement needs to be expunged since the Yale study shows no such thing. If that does not happen, organizations posting such claims need to be held liable for disseminating misinformation.

Because the study’s statistical analysis was invalidated and a correction issued, such statements need to be removed from teaching materials and websites. Hacsi Horvath, an epidemiologist who has reviewed this study and others like it, advises,

institutions should strongly consider removing [such] documents … to  prevent  potential  patient  harms  that  may  accrue  if individuals, clinicians and  policy-makers take  their  “findings” at face value.

So many structural changes to the practice of medicine appear to hinge on this one Yale study. Rippling out to affect society-wide structures, the study’s over-reach has already led to enormous changes in the way doctors practice medicine. Researchers, banking on the elite schools they work for, sell off their brand to mega foundations and agenda-driven donors.

The increasing overlap between the fields of psychiatry and medicine is wasting away the skills and strategies of traditional psychiatrists. Dr. Deborah Soh, non-conservative author of the recently published book The End of Gender  recommends a return to letting therapists do their job:

[Medical professionals] can’t do their jobs right now. Anyone who is ethical has left or is choosing not to work with gender dysphoria.  They can’t do their jobs properly.  So what you have instead is the people who are currently operating are activists, and they will facilitate what the patient wants, whether or not that may be the best thing for them.

Because many of the activist definitions have been enshrined in law, therapists and medical doctors no longer routinely complete an assessment. Few if any engage gender-confused patients in historically demonstrated successful modes of talk therapy now possibly subject to bans. As a result, many psychiatrists have left the field. At the UK’s Tavistock gender clinic, an alarming 35 clinicians recently resigned over concerns about gender affirmation, basically over-diagnosing kids who otherwise might well go on to desist.

Organizations with “trans”-affirmative protocols need to be held to account. The ways the Yale 2019 study positioned affirmative practices as the best approach show how powerful a weapon it became in convincing the public of the efficacy of “transitioning.” The social engineering goals of those with moneyed interests in this medical growth industry need to be identified and named by any organization promoting the affirmative response.

From risky off-label hormones in an unregulated sphere of medicine, “transitioning” became essential healthcare under the halo effect of the Yale 2019 study. Now that this claim is rejected, it’s time to fully retract the “trans” affirmative standard of care and allow medical practitioners to do their jobs and their organizations to advocate only what is legitimately evidence- based.

We take very seriously the trust you place in IFI when make a donation to our work and ministry.
We understand that we are accountable before you and God to honor your trust.