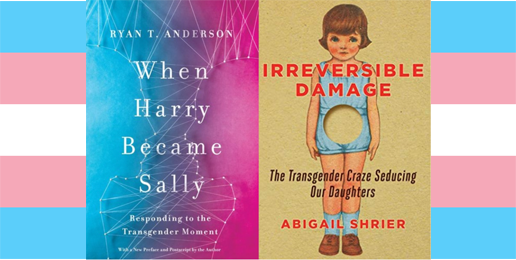 The Books You Won’t Hear About During Banned Books Week
10.01.21
PRINT

This week is Banned Books Week, a week that the American Library Association claims “brings together the entire book community — librarians, booksellers, publishers, journalists, teachers, and readers of all types — in shared support of the freedom to seek and to express ideas, even those some consider unorthodox or unpopular.” However, in a year that saw major corporations engaging in viewpoint discrimination, two books that faced bans this year for daring to question the transgender agenda, When Harry Became Sally by Ryan T. Anderson and Irreversible Damage by Abigail Shrier, were notably absent from this year’s “Challenged book list.”

As Thomas Spence, President of Regnery Publishing noted, Banned Books Week is proving itself to be nothing more than a “gimmicky promotion [that] caters primarily to those who believe that schoolchildren should have access to anything bound between two covers without the interference of those busybodies we call parents.”

Earlier this year, Amazon removed Anderson’s book on transgenderism without any warning or explanation. When they finally broke their silence, they doubled down, insisting that When Harry Became Sally, which had been listed on their website for three years without any issues, violated their standards.

However, as Anderson pointed out, Amazon can’t argue that they simply don’t sell books that they disagree with — if that were the case, then they have some explaining to do when it comes to many of the books that they do choose to sell. “[T]he way that they’ve marketed themselves to customers is that they sell all books worth reading, not just books they agree with,” said Anderson. Nor is Amazon’s argument that they won’t sell it because they won’t sell books that refer to transgenderism as mental illness compelling considering that the only times in the book where transgenderism is referred to as a mental illness are direct quotes, one from a man who identifies as transgender, and the other from University Distinguished Service Professor of Psychiatry at Johns Hopkins.

Additionally, with 40 pages of notes reflecting the rigorous academic research behind the book, and endorsements from leaders in the field, no one can reasonably accuse Anderson of cheap arguments or shoddy research. What he can be accused of is challenging the transgender agenda, and for that, his book has been banned by the world’s largest online retailer.

Abigail Shrier’s Irreversible Damage received similar treatment from Amazon when its ads were removed last June, although Amazon has not removed the book itself. Target, on the other hand, pulled Irreversible Damage from shelves after a single complaint from an anonymous Twitter user. After briefly reinstating it, Target quietly removed the book again, along with The End of Gender by Dr. Deborah Soh, another book that critiques the transgender agenda.

The theme for this year’s Banned Books Week is “Books unite us. Censorship divides us.” As such, one would think that Banned Books Week would take the time to highlight the censorship coming from major corporations, but the organizations behind Banned Books Week have remained conveniently silent on this issue. Instead, proponents of Banned Books Week use the week as an excuse to celebrate increasingly explicit content filling library shelves under the name of free speech while conveniently turning a blind eye to the egregious viewpoint discrimination that takes place when authors challenge radical gender ideology.

If Banned Books Week is really about celebrating free speech and giving a voice to unpopular points of view, then using it to push an agenda that enjoys the support of top elected officials, woke corporations while ignoring the censorship of dissenters is hardly the way to do that. For my part, I’m celebrating Banned Books Week by revisiting When Harry Became Sally and Irreversible Damage.

Patience Griswold received her BA from Bethlehem College and Seminar and writes from the greater Twin Cities area.
This article was originally published by the Minnesota Family Council.