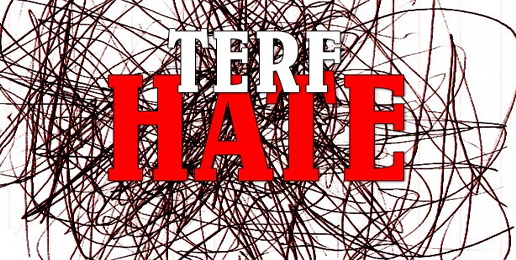 **CAUTION: Not for younger readers**

To capture and devour children and adults has required some cunning and now familiar strategic maneuvers. You know the drill:

And hoo-boy, when I say bully, I mean bully.

Not even feminists who support most of the “trans” agenda are exempt from the wrath of “tolerant” trannies. Adults who impersonate the opposite sex have created the derogatory acronym “TERF,” which stands for “trans-exclusionary radical feminists,” to insult and marginalize those feminists who don’t want men in women’s private spaces. Here are just a few of the tweets from “trans”- cultists about “TERFS” that have been collected on the website “TERF IS A SLUR”:

And here’s this from another “TERF”-hating man who pretends to be a woman:

we need to…start making their lives hell. terfs need to be absolutely terrified to share their hatespeech in public…. ridicule them. continue calling them ugly, doxxing them, and calling their employers. don’t let them make a single post or thinkpiece without being unchallenged. flood their notes with tenfold the hatred they give us. they are slimy fascists and they need to be entirely obliterated. make subscribing to terf ideology about as wise as shooting yourself in the foot. and to any terf who wants to accuse me of “male violence” or whatever, please go choke on a nail.

Not all “TERF”-haters are trannies. Some are “liberal feminists” (as opposed to “exclusionary radical feminists”) who have jumped aboard the “trans” train that will steamroll right over all sex-segregated spaces—and ALL means ALL. Liberal feminists see sex-segregated restrooms, locker rooms, shelters, semi-private hospital rooms, and nursing home rooms as “exclusionary” bugaboos that must be eradicated in order to serve the absurd, reality-denying “trans” ideology.

Just as the Left has found “diversity” a tactically useful term, so too have they found the terms “inclusion” and “exclusion.” But just as there is nothing intrinsically good about diversity, there is nothing intrinsically good about inclusion or bad about exclusion. There are phenomena that should be excluded from some contexts. For example, people with congenital penises should be excluded from women’s locker rooms.

Soon, a mere claim from a man that he “identifies” as a woman and abracadabra the doors to previously women-only private spaces will swing wide open. No castration, no vaginoplasty, no feminizing hormone-doping, no tracheal shaves, no electrolysis, no cross-dressing, no make-up, no diagnosis of gender dysphoria—not even the experience of gender dysphoria will be necessary to access women’s private spaces. No siree, Bob—er, I mean, Bobette. The word of “transwomen” will be their passport to the soon-to-be all-inclusive Shangri-la (costs paid by actual women).

“Trans”- cultists hate feminists like Sam Reitger who tell the truth. In response to a Facebook photo of a young man who just after surgery to reconstruct his penis into the semi-likeness of a vagina, exclaimed “I have a vagina,” Reitger wrote this:

No, he does NOT have a vagina.

I understand that folks want to be sensitive to transgender people’s identities. However, reality does not cease to be reality just because there are people in this world who don’t like it. This man (yes, he is STILL a man!) got his penis surgically inverted. A surgically-inverted penis is not and never will be the same thing as a vagina.

Biology is a real thing and subjective feelings of identity don’t make truth and fact go away.

Lastly, I think it says something very disturbing about the way men view women when a man can mutilate his penis and folks will indulge him in his delusions about possessing a vagina. A vagina is not just some hole that exists between a woman’s legs. It is a functioning organ and crucial part of female reproductive anatomy.

Whatever you want to call the gaping wound this guy has between his legs, it is absolutely not a vagina.

Feminist Charlie Rae, a colleague of Reitger, posted the following comment on the Facebook wall of Kat Blaque, an objectively male black person who pretends to be a woman:

I’ve been thinking about transitioning to a black person. any resources you could help me out with?

Rae then points out the irony in their responses, asking, “how is it ‘transphobic’ to tell a man who wants to be a woman that he CAN’T (because it’s not possible), but it’s not ‘transracism’ to tell me that?”

Reitger exposes the incoherence of the claim by “trans”-identifying males that inside their skulls reside lady brains, which they “know” because they are attracted to the arbitrary socially constructed phenomena (e.g., girls clothes or toys) that society imposes on girls:

Imagine, for a moment, we were being told to look for ‘black brains’ in white bodies because some white people like watermelon or rap music. The premise is certainly faulty. We don’t look for what makes someone black in their brains based on stereotypes that have been forced onto black people; we look at skin color because that’s what being black is. When we look at sex, you could look at a myriad of characteristics, and brains simply exist within these bodies.

For these commonsense views on the “trans” ideology, the “trans” community hurls invectives and threats at “TERFS.”

“Trans”-cultists and their ideological accomplices seek to impose their wildly anti-science dogma through coercion that includes imposing financial penalties or jail time for refusing to use grammatically incorrect pronouns; through indoctrination in public schools—including even elementary schools; and through bullying name-calling:

What will conservatives do when their children are told by teachers that they are hateful bigots for believing that boys have penises and girls have vaginas? Will conservative parents say anything when their children are forced to refer to “trans” classmates or teachers by grammatically incorrect pronouns? Will they stand with upright spines and refuse to allow their sons and daughters to share locker rooms and restrooms with opposite-sex peers? Or will they again bend it like Gumby?

Gender dysphoria is a real phenomenon which, like Body Integrity Identify Disorder (i.e., those who identify as amputees), can entail tremendous suffering. Those who experience it deserve compassion and proper treatment which is increasingly hard to find because of the radical “trans”-affirming social and political movement that works like the devil to normalize disordered thoughts, damaging medical quackery, and immoral behavior. Those who identify as “trans” should be treated with civility, but their ideology and the cultural revolution they pursue should be treated with the condemnation they deserve. Treating their false beliefs with respect harms people.

We ignore the fringes of this anti-culture at our own peril. Silence and acquiescence ensure that fetid fringe ideologies become our miasmic mainstream.

Prayerfully consider how you can support
the work and ministry of IFI through a donation.