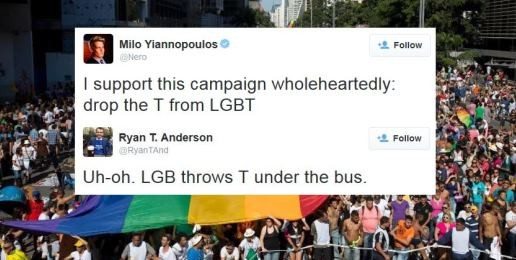 A stunning rift within the cultural/political movement to normalize sexual perversion has emerged or, more precisely, been exposed. While the leftwing press, with feigned drama as if they’re revealing a state secret, proclaims to the world differences among conservatives, they are masters of concealing rifts among their own darling constituencies, and this one’s a doozy.

A petition drive has been started by homosexuals calling for the Human Rights Campaign (HRC), the Gay & Lesbian Alliance Against Defamation (GLAAD), Lambda Legal, HuffPost Gay Voices, and  the homosexual magazines The Advocate, and Out Magazine to sever ties between the “LGB” community and the “trans” community.

Here are excerpts from the startling and ironic accusations against the “trans” community made by petitioners on the left-leaning petition-generating site Change.org, claims that will sound familiar to conservatives who have been fighting pro-homosexual tyranny:

1.)  The homosexual petitioners accuse “trans” people of “the vilification and harassment of women and gay/lesbian individuals who openly express disagreement with the trans ideology; a simple disagreement over an issue can result in responses that range from insults (‘transphobic bigot’) to threats of physical harm (often, in the case of women, rape) and even death….”

2.)The homosexual petitioners accuse “trans” people of “The infringement of the rights of individuals, particularly women, to perform normal everyday activities in traditional safe spaces based on sex; this is most pernicious in the case of men claiming to be transgender demanding access to bathrooms, locker rooms, women’s shelters and other such spaces reserved for women.”

3.)  The homosexual petitioners strongly oppose the early diagnosis of children as “transgender”: “Most troubling, by persuading parents and health professionals to diagnose children as young as four as transgender, despite considerable research that shows that more than 90 percent of children who express “gender dysphoria” at a young age grow out of it by adolescence…”

What? Disagreement over ideology results in insults and threats of harm? How shocking. Almost as shocking as finding gambling going on in Casablanca.

[I]t’s trannies forcing their way into the high school girls’ locker room courtesy of Title IX, a set of rules designed primarily to assist female athletes. We’re even seeing the growth of a cottage industry of mediocre male boxers who declare themselves “women” and start dominating female competitions, doing serious injury to “cis” women in the process….[V]ery often those playing the trans card in the media, whether personally transgender or not, are very often the most awful people on the planet: hectoring, nannying control freaks…

And I must warn you. Should you dare to question transition surgery as the most effective or humane treatment pathway for patients with gender dysphoria – and I’m the only high-profile LGBT person to have repeatedly done it, even after sustained and bilious backlash –…. They threaten to burn you in effigy on a pride float designed by heterosexual accountants, and that’s just the start.

IFI is in complete agreement with the petitioners who argue that “a discussion must be opened up to these issues, which for too long are being suppressed and censored….[W]e feel that the transgender ideology is not compatible with the rights of women…and children.”

We agree that sex matters—and by “sex” we mean objective biological sex—and that women—and by women, we mean humans with XX chromosomes—are entitled to private spaces for private activities.

We agree that the “transgender” ideology is incompatible with the rights of children.

We agree that minors ought not be labeled “transgender.” Children should not receive puberty-blockers, cross-sex hormones, mutilating surgery, or be referred to by opposite-sex hormones.

And we agree with the proposition that ideological disagreement should not result in epithet hurling or threats.

The freedom to disagree ideologically extends even to the frighteningly well-armed border around homoeroticism. People have the right to disagree with the epistemological, teleological, and ontological assumptions of the Left regarding all things homosexual.

And we believe that those who dare to dissent from “LGB-QQIAP” dogma should be free to refuse to bake anti-wedding cakes and still keep their jobs.

We need you now more than ever!  Please partner with IFI
as we stand on the front lines for marriage, family, life and liberty.