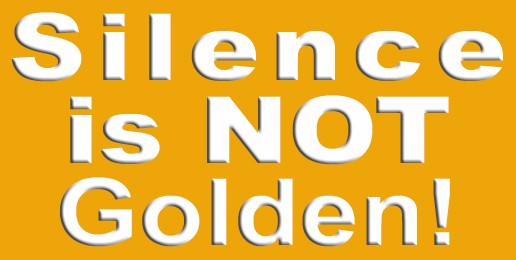 Some prefer to take the quiet approach to the marriage issue. They want to “speak with their actions” rather than engage in meaningful dialogue or use words that others would understand. Hey, I’m all for living a life that shows others what I am about. I do that by being in church every Sunday, celebrating Christmas and Easter rather than non-specific nature oriented holidays, not cursing, not getting drunk, and voting patriotically according to my conscience rather than my wallet. So don’t misunderstand me and think I don’t support people who silently live what they believe.

My problem is that too many are being too silent and the minute minority has overshadowed the vast majority by simply being louder. If you ask the average person what percentage of the population is LGBT or any other sexually oriented abbreviation they will most likely answer with numbers between 20% and 40%. You’ll enjoy watching their jaw drop when they find out it is only about 3.5%.

But that’s the power of words. Words change minds and views. Words engage opposition and create open dialogue among two sides of an issue. So when one side is decidedly more quiet than the other, the inevitable outcome is the louder side make gains while the quiet side loses ground.

If you don’t believe that then explain how the homosexual agenda has gained such ground over the last decade. When Christians and pastors and conservatives decided to avoid conflict and refused to engage in civil conversations with those they disagreed with, they began losing ground. A very good example of this comes from Matt Barber’s latest article in which he shares details of an internal DOJ document titled: “LGBT inclusion at Work: The 7 Habits of Highly Effective Managers.”

The most chilling aspect to this report is that the DOJ is now taking the position that silence on the issue of homosexuality will be interpreted as opposition! Here are the actual words from the report and Matt Barber’s comments:

“That’s a threat. And not even a subtle one. Got it? For Christians and other morals-minded federal employees, it’s no longer enough to just shut up and ‘stay in the closet’ – to live your life in silent recognition of biblical principles (which, by itself, is unlawful constraint). When it comes to mandatory celebration of homosexual and cross-dressing behaviors, ‘silence will be interpreted as disapproval.’ This lawless administration is now ordering federal employees – against their will – to affirm sexual behaviors that every major world religion, thousands of years of history and uncompromising human biology reject. Somewhere, right now, George Orwell is smiling.”

Do you get it? Silence is no longer an option for the Obama administration. They aren’t content with Christians and others simply living a “quiet and peaceful” life of opposition to the homosexual lifestyle. They are now in the position of demanding everyone accept it openly and vocally or risk being called an opponent.

If you think this all there is, read the rest of the document and Barber’s comments. But trust me when I say it gets worse and far more frightening. But the bottom line remains the same; silence is no longer an option. One way or another you will have to speak up and state clearly where you stand on this critical issue.

I gave up silence a long time ago. I believe it is important for people to know what the Bible says about these issues and that I structure my life around what the Bible teaches, not what the culture peddles as popular or moral. I prefer a solid, transcendent truth that comes from God over the shifting, wind-blown rhetoric of activists and politicians. For those that preferred the sidelines and the “quiet life” it would appear your silence has not only yielded ground to the opposition, it is now so undesirable that it will be forced to an end.

Just to drive the point home, here’s another segment of Barber’s letter beginning with additional points made in the DOJ document:

“Are you kidding? Does this administration really think it’s legal to compel managers to ‘attend LGBT events,’ or to ‘display pride stickers’ against their will? That’s compulsory expression. That’s viewpoint discrimination. That’s unconstitutional.”

You see, our government’s been emboldened by the silence of people who oppose homosexuality. They believe they can force people to not just tolerate it, but to vocally accept it. This would not be the case if the “silent majority” would boldly stand and speak. As long as people are afraid to stand for the truth and speak truth to our culture we can rightly expect continued fear-mongering and intimidation tactics on the part of our government and those they lobby for.

Perhaps no other thought on silence is more appropriate than that of Deitrich Bonhoeffer, the German pastor and activist killed for his outspoken opposition to the evil he saw around him during Hitler’s regime:

“Silence in the face of evil is itself evil: God will not hold us guiltless. Not to speak is to speak. Not to act is to act.”

Nathan Cherry is the chief editor and blogger for the Engage Family Minute blog, the official blog of the FPCWV. He serves also as the Regional Development Coordinator as a liaison to the pastor’s of West Virginia. He is a pro-life, pro-traditional marriage, pro-religious freedom conservative. He is also a husband, father, pastor, author, musician, and follower of Jesus Christ.