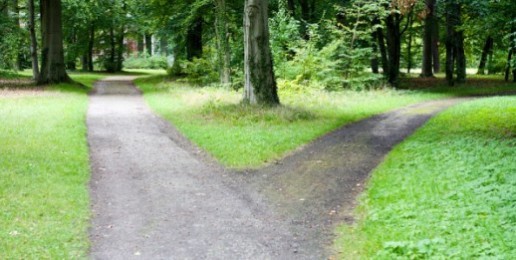 Reparative Therapy: How Does it Work, What Does it Achieve?
05.29.15
PRINT

Thirty one years ago I chose a new path.

I’d been apprehended by God, who I now fondly call the Great Interrupter, and a clear reading of the scriptures told me I’d been wrong for years – wrong when I had lived as an openly gay man, wrong when I identified myself as a gay Christian, and wrong when I promoted the idea that homosexuality and Christianity were compatible.

And, like Jarod Kintz who’s quoted above, I was now deciding which path best suited me.

Same Goal, Different Paths
Reparative Therapy is one of many paths available to people in that situation. It’s a topic of interest to anyone interested in ministry approaches to homosexuality, and certainly to anyone who, like I did in 1984, reaches a point of crises over their own feelings.

It’s also under considerable fire these days, and has actually been banned as a treatment option for minors in some states. It’s become, as noted in earlier posts, a catchphrase for any form of help offered to someone who is in conflict over his or her homosexuality. The phrase itself – Reparative Therapy – (also at times called “Conversion Therapy”) has become a dirty term in some circles, where it’s viewed as a Medieval form of brainwashing practiced by quacks. Just three days ago, my wife Renee was hosting our ministry’s booth at our denomination’s district council when three teens approached her, skeptically eyed our materials, and said, “But you don’t do conversion therapy, do you?”

Clearly, people are talking about this stuff.

So in next week’s post we’ll discuss the controversies associated with this form of treatment, and offer a response to them. My goal is neither to endorse or condemn, but to assess whether or not RT is a valid option by asking ourselves whether it helps or hurts, whether it’s Biblical or not, and whether it’s the best way to deal with unwanted sexual desires, or the worst idea since shock treatment.

But today, let’s look at the approach reparative therapy offers, the outcomes it promises, and how both approach and outcome square with Scripture’s guidelines for growth and change.

As I’ve mentioned in prior postings, I consider Dr. Joseph Nicolosi  the primary spokesperson for RT, since he’s the Founder and Director of the National Association for Research and Therapy for Homosexuality (NARTH) and the author of Reparative Therapy: A New Clinical Approach which is the definitive work explaining the RT’s theories and techniques. So we’ll let Dr. Nicolosi speak for himself when we ask how RT works, and what people who receive it can expect.

Something Offered, Nothing Forced
Reparative Therapy is not Biblically based, nor could it be called “religious” in nature. It’s psychoanalytical in theory, its premises drawn largely from Freudian and neo-Freudian writings. But because modern psychology views homosexuality as a normal variant of human sexuality, RT offers an alternative to Christians who want professional help from a license therapist, but who don’t want someone holding the dominant professional view.

It’s only for the person who’s motivated, and Nicolosi is clear about coercion, insisting that this is something that should never be forced on anyone. “The client has come to the therapist seeking assistance to reduce something distressing to him”, he writes, “and the RT psychotherapist agrees to share his professional experience and education to help the client meet his own goal.”

To do so, I see RT as a form of treatment which encourages looking at the past, while offering specific outcomes. And while a detailed examination of the subject is beyond the scope of a blog post , a few important points can be made here.

Looking at the Past
Since psychoanalytic theory, along with many other psychological approaches, sees the early years as formative and as holding past answers to many current problems, it’s no surprise RT spends time on the past. Clients are encouraged to look at their early relationships for clues as to what formed their homosexual desires, and what likewise formed the way they view themselves, others, and
the world.

Emphasis is placed on the client’s relationship with the parent of the same sex, since homosexuality is viewed by RT as representing a need for same sex bonding. So if the need for a father’s love was not met (or a mother’s love in the case of a lesbian) then that need for same-sex love has, according to theory, become a sexual desire. And even if the desire is not sexually fulfilled, it remains an emotional need, one which to this day cries out for fulfillment.

In fairness we should note, in light of the fact many people see homosexuality as something inborn rather than acquired, that RT does take inborn influences into consideration. The NARTH Institute states:

The value of this approach is two-fold. First, it helps answer the Why Me? question, and that alone can be a relief and an emotional empowerment. Second, it identifies an ongoing need which still calls for attention. RT encourages the client to build and strengthen healthy same-sex friendships, friendships which in turn can meet the unfulfilled desire which had become sexualized.

Personal Notes
On the one hand, I’ll vouch for this as an approach which worked well for me. I began therapy, not with someone who called himself a Reparative Therapist since the term didn’t even exist at the time, but with a licensed professional who did view both my relationship with my father and my early experiences with peers as being significant.

And darned if he wasn’t right. Not only did I come to see how my yearning for a father’s love had played into my sexual behavior, but I also saw how my lack of confidence, springing from those early years, inhibited my ability to form normal bonds, both in boyhood and adolescence. My therapist repeatedly said “That’s too bad” when discussing the past, and “It’s not too late!” when discussing the now. So at his insistence, I began building strong bonds with Christian friends who became literal healing agents in my life. For me, this approach worked, and it worked well.

On the other hand, I’d caution against presuming that one man’s story is every man’s story. Just because the RT model applied to me surely doesn’t mean we should assume all homosexual men had a poor relationship with their Dad, because clearly they did not. Many gay men report loving and strong fathers who they had a terrific relationship with, and many straight men report horrible experiences with their Dads. So the equation is never as simple as Good Dad equals Straight Son; Bad Dad equals Gay Son. The sin nature, which I’m convinced homosexuality springs from, is craftier than that, often defying analysis. So let’s never force one theory onto all cases, because it won’t work.

Likewise, caution should be taken against blaming parents. Sometimes looking into the past morphs into wallowing in the past, just as looking at Dad critically can morph into blaming Dad for all my wrong choices.

In short, good therapy won’t produce professional victims. From all I’ve read and heard from Nicolosi, he seems to agree, and his teaching does in fact stress personal responsibility versus self-pity. I only hope all who practice his theories are following his lead, because Biblically, we’re never given a pass on sin just because we’ve been sinned against.

My therapist, God bless him, encouraged me to grieve the wrongs done to me without ever excusing my own wrongs. Recognizing what wasn’t my fault reduced unhealthy shame; recognizing what was my fault helped me take responsibility. And that, I believe, is the proper balance any good counseling will offer.

Promised Results
Despite accusations that Reparative Therapy promises to convert gays into straights (a misnomer sometimes sarcastically phrased as “Pray the Gay Away”) the outcomes promised are more modest than that. The NARTH position on change is that it occurs, but to different degrees among different people, and in differing ways. In fact, NARTH plainly states that in some cases an individual seeking RT will experience no change in his sexual feelings, while others experience
specific change:

“ — some individuals who seek care for unwanted same-sex attractions do report categorical change of sexual orientation.  Moreover, others have reported no change.”

Likewise, their definition of change is not either/or. Rather, they describe it as occurring “on a continuum, with many being able to achieve sustained shifts in the direction and intensity of their sexual attractions, fantasy, and arousal that they consider to be satisfying and meaningful.”

Fair enough. While we’d prefer changes to be complete and permanent, in no area of life does that hold true. For example, if someone is treated for depression, he’s likely to experience improvement, but not immunity to future struggles. In fact, good treatment will equip him to deal with those struggles when they arise, rather than promise a “presto-chango” kind of result.

So it is with any counseling or ministry approach to homosexuality. Some people who undergo it will find the power or frequency of their homosexual desires will diminish, and if and when those desires re-emerge, they’ll be better equipped to recognize and resist them.  Others will find that they have potential for heterosexual responses; others will find that only their behavior changes, but their desires do not, and while that’s clearly not the ideal, it’s also clearly an improvement. Still others find this therapy enables them to relate in more healthy ways, and even if their sexual attractions don’t change, their self-view, intimacy abilities, and general well-being change significantly.

All of these outcomes are positive; all of them are similar to outcomes experienced by people who’ve had counseling or therapy of any sort – weight loss, addictions, depression, anger management. Change happens, but complete and permanent change, without any future temptations or struggles, is awfully rare, if
non-existent.

In my own work, I noted in an interview with the LA Times that “no one has ever left my office saying, ‘Wow, I have absolutely no homosexual thoughts or fantasies.’ ”  And in my own life I’ve noted this principle as well. Repenting of homosexual behavior was one thing; deciding to simply “stop feeling that way” was another. So when I asked my therapist if I would ever stop feeling temptations, he advised that it would be smarter to be prepared to handle them properly, rather than wait for them to vanish.

So to this today, while I feel no temptation at all to return to that behavior, and while I’ve enjoyed a pretty terrific 28 year marriage, I also know under what circumstances I might feel tempted. For obvious reasons, I avoid those circumstances. I wouldn’t do evangelism in gay bars, as some do. I likewise don’t think it would be smart for me to hand out Christian brochures at a gay pride parade, because for me, being in an environment where overt homosexuality is on display could reawaken old tendencies.

I’m not sure that would be the case; it might have no effect on me at all. But why on earth would I want to find out? I like my life as it is.

So do many others who’ve availed themselves of reparative therapy. (You can read some their own testimonials here ) It’s not the only path a person can take and, in fact, I found that my own therapy was only one of many elements that changed my life after I repented. Church fellowship, deep friendships, and sanctification were the main courses; therapy was a supplement.

That, in the long run, is how I think it should be viewed. Useful, but not essential; very helpful, but not the only form of help. And on that point, every reparative therapist I’ve known, Christian or not, would say Amen.

This article was originally posted at the JoeDallas.com blog.