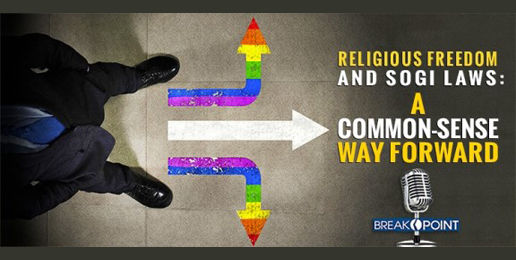 Before Christmas, I warned how Sexual Orientation and Gender Identity laws, or SOGI laws, as they’re called, create new protected classes of people based on inclination and behavior, not biological realities of race and sex.

Now it seems that we’re at an impasse, but not really. I’m grateful how the Heritage Foundation’s Ryan Anderson has demonstrated, in a new report, that fighting discrimination and protecting religious liberty do not have to be mutually exclusive.

A key point of the report, which is entitled “How to Think about Sexual Orientation and Gender Identity Policies and Religious Freedom,” is that proponents of such wide-ranging SOGI laws have failed to prove they’re even needed. In fact, as Ryan says, there’s “no evidence that people who identify as LGBT have been turned away by a single hotel chain, a single major restaurant, or a single major employer.”

Even so, like all laws, SOGI laws will have a pedagogical role in our society, teaching that the Judeo-Christian worldview is “not only false, but discriminatory and rooted in animus.” They will impose a new orthodoxy concerning human sexuality “by punishing dissent and treating as irrational, bigoted, and unjust the beliefs that men and women are biologically rooted and made for each other in marriage.”

So at their core, Anderson writes, “SOGI laws are not about the freedom of LGBT people to engage in certain actions, but about coercing and penalizing people who in good conscience cannot endorse those actions.”

So what’s the way forward? First, as Anderson suggests, we should identify real-world instances of discrimination and then tailor-focus responses appropriate for the need, rather than implementing sweeping SOGI legislation. We might even find, as we look for specific real-world instances of discrimination, that government action is not even necessary—if “social, economic, and cultural forces” (are) sufficient to address the needs on their own.

Second, Anderson points out, both sides need to carefully define terms. There is a difference, for example, between discrimination and making distinctions. Sex-specific bathrooms and locker rooms, for instance, are not based on discrimination, but upon observable physiological and common-sense distinctions. And here’s another distinction: religious adoption agencies “decline to place the children entrusted to their care with same-sex couples not because of their sexual orientation, but because of the conviction that children deserve both a mother and a father.”

Ryan concludes, “if other policies are adopted to address the mistreatment of people who identify as LGBT, they must leave people free to engage in legitimate actions based on the conviction that we are created male and female and that male and female are created for each other. This would,” Anderson asserts, “leave all Americans—not just the lucky few who are sufficiently well-connected to be exempted from SOGI laws—free to act on those convictions.”

I encourage you to read Anderson’s report. Then send the report to your state and federal representatives, as well as to friends and relatives open to a common-sense discussion of these very choppy waters. Finally, consider adding your name to our statement on SOGI Laws. You can find it at our website: BreakPoint.org.

BreakPoint is a Christian worldview ministry that seeks to build and resource a movement of Christians committed to living and defending Christian worldview in all areas of life. Begun by Chuck Colson in 1991 as a daily radio broadcast, BreakPoint provides a Christian perspective on today’s news and trends via radio, interactive media, and print. Today BreakPoint commentaries, co-hosted by Eric Metaxas and John Stonestreet, air daily on more than 1,200 outlets with an estimated weekly listening audience of eight million people. Feel free to contact us at BreakPoint.org where you can read and search answers to common questions.

Stonestreet: The Sexual Revolution: Its Ideas and Its Victims

Why Your Worldview Matters
b
a
x
r