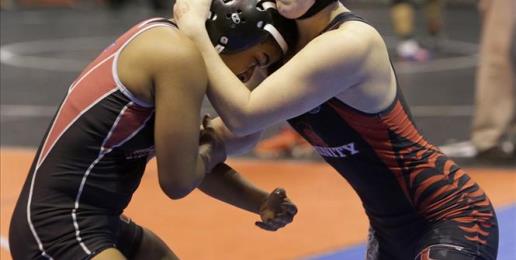 I did not intend to write about this story, but when I saw a picture of the teenager in question, I had to. He is 15-years-old, clearly a biological male. Look at his picture for yourself, mustache and all. As Joy Pullman notes on The Federalist, he has “not taken drugs nor undergone surgery to mimic femininity.” Yet he was allowed to compete against other girls in a recent sporting event, and to no one’s surprise, he won – quite handily, at that. Is this what is meant by “equality”?

In recent weeks, we’ve read about a female high-school wrestler who identifies as male and who has been taking testosterone to prepare to “transition” to male. Unsurprisingly, she defeated the other girls, all of whom are not taking testosterone.

We also read about a male weightlifter who now identifies as female. Unsurprisingly, he defeated the women he competed against, setting a new record along the way.

Other examples could be supplied as well, since this is becoming more and more common.

How is this fair? How can progressives and liberals and leftists and LGBT activists and their allies think this is right? And do the feminists of the world really want to engage in head-to-head athletic competition with their male peers?

If this was done in the world of professional sports, there would not be a single woman winning, let alone playing, at the elite, highest levels.

Not one female basketball player would earn a berth in the NBA. Not one female athlete would make it to the Olympics – in swimming or rowing or weightlifting or skiing or running or jumping or hurdling or boxing. Not one.

Men would dominate in every event, and women would be relegated to cheerleading.

At least it should be. Today, common sense is in danger of extinction, and concepts like fairness and equality are turned upside down.

The 15-year-old in question goes by the name of Andraya Yearwood, and as the Hartford Courant reported, Andraya’s first event with female peers was a cause for celebration: “With family, friends and teammates cheering her on at her first high school track meet, Andraya won the girls 100- and 200-meter dashes, and helped her 4 x 100-meter relay team take second place.”

What did this look like in person? One picture says it all, as Andraya leaves the other girls behind, girls who trained so hard for these events, only to be beaten by a boy. And I mean beaten decisively.

But Andraya’s mother had a response to anyone would protest the event: “I know they’ll say it is unfair and not right, but my counter to that is: Why not? She is competing and practicing and giving her all and performing and excelling based on her skills. Let that be enough. Let her do that, and be proud of that.”

What kind of logic is that? Because this 15-year-old biological male is competing and practicing and giving his all, that makes it fair and right for him to compete with his female peers? No matter what these other girls do, no matter how hard they try, no matter how much they push themselves, they will not be able to keep up with an equally devoted male peer. How is this fair and right to them?

Andraya’s father is also supportive, saying that his son is competing just where he should be competing, also explaining that you are born into a particular body but you grow into being a particular person.

But athletic events are conducted in the body, regardless of how the person inside that body identifies. Yet when people ask Mr. Yearwood, “Why is your daughter running with the girls?” his response is, “Because she’s my daughter, much like the reason your daughter is running with girls.”

With all respect to the Yearwood family, and with understanding that for them this was a matter of life and death for their child, what Mr. Yearwood is saying is patently false. His child is not running with the other girls the same way the other daughters are running, just like his child does not have to deal with monthly periods or female hormonal changes, since Andraya is not like the other girls.

“But,” you ask, “what about Andraya? What if Andraya has gender dysphoria? What if identifying as female will save her life?”

That is between Andraya and his family and the Lord. But Andraya’s personal struggles cannot be imposed on everyone else, meaning, as a biological male, he has no business competing with other girls, or, for that matter, sharing their locker rooms and shower stalls. That is not the meaning of equality.

Even according to activist ideology, gender is a social construct but sex is biological. And when it comes to male and female athletic competition, we divide based on biological sex.

In the end, this is just one more example of why I believe LGBT activism will ultimately defeat itself.

You cannot wage a winning war against gender distinctions any more than you can redefine marriage while preserving its integrity. As expressed by Joy Pullmann, “It’s a pretty sure bet Americans did not expect tolerance for two consenting adults doing whatever behind closed doors to become a spearhead for forcing naked boys to shower next to naked girls and make girls second-class players on their own fields.”

And so, I appeal to progressivists, leftists, feminists, and LGBT allies and their allies, along with all those who cherish fairness, equality, and justice. Look carefully at the trajectory of your activism, and ask yourself: Is this really the kind of world that you want?

When Parents Push Back Against Transanity