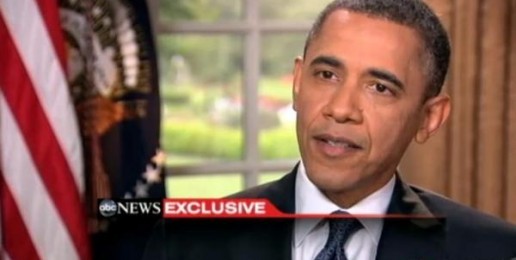 In the wake of North Carolina’s overwhelming vote to approve a state constitutional amendment that defines marriage as the institution of one man and one woman, President Barack Obama has declared that he now supports redefining marriage to include homosexual partners.

In 2008, as a candidate for President of the United States, during a Presidential Forum at Saddleback Church, Obama told Pastor Rick Warren that he believed that “marriage is the union between a man and a woman.  Now, for me as a Christian – for me – for me as a Christian, it is also a sacred union.  God’s in the mix.”  Obama went on to say, “I am not somebody who promotes same-sex marriage, but I do believe in civil unions.”

In 2010, in the middle of his first term as President, Obama told the media in a press conference that his “feelings” about redefining marriage were “evolving.”

Yet today, May 9, 2012, in an interview with ABC News’ Robin Roberts, President Barack Obama announced that he is now a proponent of same-sex marriage.  In this interview, Obama admits that he “has been going through an evolution on this issue.” If that is the case, I’d like to know if this “evolution” will soon include the redefinition of marriage to include plural marriages, incestuous marriages, and adult-child marriages.  If Obama has flipped-flopped back and forth in his evolutionary thinking on this issue, it isn’t a stretch to believe that further redefinition of marriage is possible.

But perhaps the most disturbing part of his announcement is how he frames the issue.  It is the same way the Left and their allies in the media narrate and spin their agenda.  Obama explains that “I’ve always been adamant that gay and lesbian Americans should be treated fairly and equally…”  Of course, we agree that all Americans should be treated fairly and equally – including those who self-identify as homosexual.  But fairness and equality do not include legally elevating same-sex relationships to the same level of the God-ordained institution of marriage.  They are not equal.

And the notion that homosexual partners are somehow being denied the freedom to live as they wish, is absurd.  Homosexuals have the liberty to have a relationship with any consenting adult (or adults) they wish.  No one is stopping them from having these relationships.  Taking these relationships into the public square demanding that we change public policy, create special laws and change the very definition of marriage is intolerable.  Americans cannot stand by and watch a foundational institution like marriage be undermined by a minority wanting to impose a radical political agenda on the rest of us.

Take ACTION:  Click HERE to send an email or fax to President Obama.  Ask him to stop advancing radical social political agendas and focus on creating jobs and reducing the debt.

Simply eliminating an entire gender from the picture and still calling it “marriage” is not merely redefining the institution, but rather the destruction of a core building block of society.

Help expand our reach by sharing this article

with like-minded family and friends.