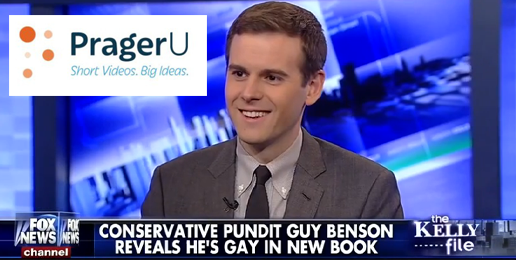 Prager University (PragerU) was started in 2009 by Dennis Prager as a way to circumvent the left-leaning educational universe and bring conservative ideas to the public in general but especially to young people. This week, PragerU released a deeply disappointing video featuring Guy Benson, political editor for Townhall Magazine and frequent contributor on Fox News Channel.

Guy Benson is immensely gifted. He is a bright, thoughtful, articulate young man with a quick mind and a gracious, winsome manner. He is also telegenic, which makes him a perfect spokesperson in a culture mediated by visual media. But those very gifts and his appeal to young people will enable him to have a corrosive effect on some conservative values.

Book-ending his five-minute PragerU video, Benson says, “I’m a Christian; a patriotic American, and a free market, shrink-the-government conservative who also happens to be gay.”

The phrase “happens to be gay” is an attempt to diminish the significance of his choice to affirm homosexuality as central to his identity. Please note, I did not say Benson chooses to experience same-sex attraction. Rather, he has freely chosen to place his unchosen homoerotic feelings at the center of his identity, and that is not something that just “happens.” Nor is it something trivial.

Benson goes on to say that “Far too often people are sorted by their gender, or their skin color, or their sexual orientation, or any other immutable characteristic that has nothing to do with ideas or values.”

This short sentence contains a number of troubling propositions.

Like “progressives,” Benson suggests that “gender”—and by “gender,” I assume he means biological sex—and skin color are analogous to “sexual orientation.” First, “sexual orientation” is a Leftist rhetorical construction intended to communicate the false idea that heterosexuality and homosexuality are flipsides of the sexuality coin and morally equivalent. In contrast, others argue that homosexuality represents a disordering of the sexual impulse.

Second, homosexuality per se has no points of correspondence to sex or skin color. Biological sex and skin color are genetically determined and carry no behavioral implications, thereby rendering moral disapproval of them irrational.

In contrast, homosexuality is constituted by subjective feelings, whose cause or causes are unknown, and volitional activity for which moral assessment is both rational and legitimate—no matter what the cause or causes for the feelings.

And how does he respond to the brilliant Rosaria Butterfield, a former feminist English professor and lesbian who has written eloquently about her spiritual conversion and rejection of a lesbian identity?

Fourth and most intellectually dishonest, Benson makes the remarkable claim that the affirmation of a homosexual identity “has nothing to do with ideas or values.” Does Benson really believe that his (or anyone else’s) homosexual attraction has anything to do with his ideas about and support for the legal recognition of same-sex unions as marriages?

And does he really believe that his homosexual attraction has nothing to do with his hermeneutics (i.e., methods of biblical interpretation)? Benson claims he is a Christian and that his Christian identity sits at the tiptop of his list of personal identifiers. For him to identify as a homosexuality-affirming Christian, Benson must have first embraced a very late 20th Century revisionist hermeneutic that rejects the plain reading of Scripture and 2,000 years of church history, and which emerged not from newly discovered documents but from the mid-20th Century sexual revolution.

Arguably the preeminent theologian writing on the Bible and homosexuality, Dr. Robert A. J. Gagnon, writes this in response to Benson’s PragerU video:

Marriage is the single most significant structure in society. Radically redefining it at its very foundation so as to make gender differentiation irrelevant is a decisively non-conservative political stance, not to mention an unfaithful anti-Christian position that tacitly rejects the God of Abraham and Moses as well as the lordship of Jesus Christ. There can be no negotiation on this point without upending the rug on which the conservative table is set. It takes more courage to hold the line here than on any other position. Conservatives should be known for courage, not cowardice; clarity, not confusion.

In an unsuccessful attempt to prove that his homosexuality does not affect his “ideas or values,” Benson points to the relatively small amount of time he spends addressing “LGBT issues”:

To be candid, in my day-to-day life and work, I spend a lot more time thinking and writing about the failures of Obamacare, for example, than I do about LGBT issues.

Benson supports “narrow exemptions for small businesses adjacent to the wedding industry” and he “chafe[s]” at the idea that “all opposition to expanding marriage is framed as ‘hate.’” Since he is a rising star in the GOP, I guess we should be thankful for that.

The talented Guy Benson and others like him pose a threat to conservatism and Christianity. Widespread cultural approval of the homosexuality-affirming ideology threatens the foundation of any society. And if the church affirms heresy, we put at risk the eternal lives of people like Guy Benson.

Since Dennis Prager is committed to the free exchange of ideas, perhaps he’ll invite someone to appear on another video to debate the ideas expressed by Guy Benson, whose embrace of a “gay”  identity suggests that homosexuality—not Christianity—sits at the tiptop of his identity list.

Is the Media Engaging in a Form of Psychological Warfare Against America?