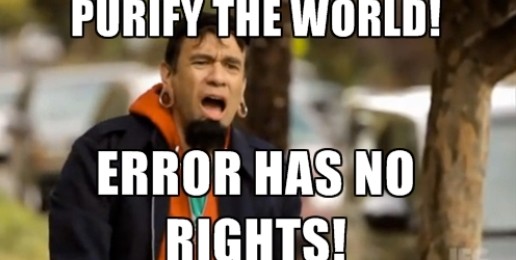 Nick Zukin, a Portland restaurateur who believes in same-sex marriage but who publicly criticized the boycott of the Chauncy Childs store (for background, see yesterday’s post), writes to say:

A couple comments and corrections:

1) The business owners did not make their opinions known on their business Facebook page. The woman had posted on her personal page and the author of the video had been investigating her and found it out. I’m not sure why he was investigating her. I believe he said in the video that he had heard rumors. I don’t know if those rumors were about her comments on gay marriage or about her being Mormon or what. In fact, the only reference they originally made to the controversy on their Facebook page was to say that they do not and will not discriminate in any way. I think some people are still under the impression that this battle is over discrimination, but the leaders of the movement to boycott their business clearly know that this is over her beliefs about gay marriage, not about any actions on her part or the part of her business — other than her quasi-public statement on her Facebook page.

2) I was very clear throughout this mess that I was a strong proponent of marriage equality. It didn’t matter. It was enough that I thought a boycott was excessive to be deemed an enemy. Today I had someone leave a 1-star review on my restaurant’s Facebook page saying that they were regular customer who liked the food, but they don’t like the “hate” that comes with it. Here is how the Oregonian quoted me:

“The idea of blacklisting and boycotting people for their thoughts and beliefs, as opposed to their actions leads to a world that is less tolerant, less caring and more segregated,” Zukin told The Oregonian. “I don’t think the results will be the ones that people want.”

He went on to say that if a business was actively discriminating, “if it wasn’t serving gays, or people were disrespectful to gays in their store, I would be there protesting and boycotting.”

3) Since taking down his video, the author has been attacked as well on the boycott’s Facebook page and in the comments sections for local news stories. They’re now calling him a “sell out” for trying to make something positive out of this and for being willing to meet with the people he disagreed with and vilified.

4) The restaurant I used to work for and still own a part of posted on their Facebook page that they find my position “appalling”. I posted in response merely the two paragraphs from the Oregonian above and my response was deleted and I was banned from commenting.

This has gotten so out of proportion. It really is sad and counter-productive. I don’t think anyone is being helped by this. I wrote this on Facebook in response to someone attacking me today:

Certainly there have been horrible crimes against individual homosexuals and the gay community in general throughout history and even recently in the United States. People still do and probably will do terrible acts against LGBT people here in the United States and elsewhere. And if they do, they should be punished for it. Hardly seems fair to lay all of that at the feet of this woman, though, even symbolically.

Only 2 years ago, Barack Obama’s stated position was the same: against gay marriage. As was probably 95% of Congress, including Democrats. It was not the right position, but it didn’t prevent well over 60% of Portlanders voting for him in 2008. That’s actually less than the national average for the percentage of gay Americans that voted for Obama in 2008, which was 70%.

So apparently being leader of the free world is not important enough to keep the gay community from supporting him despite his failings for their community, but a woman with little or no political power who doesn’t believe in gay marriage owning an organic grocery store is a bridge too far?

And what’s the end result? Now you have people sympathetic to gay rights thinking that rights aren’t enough, but that they’ll be punished if they don’t share the same beliefs. They go from feeling sympathetic to feeling threatened. Maybe you think that you’ve galvanized the gay community and left-leaning activists? I don’t think that’s true. I received Facebook messages from a local LGBT leader saying that she supports me and not to let this get me down. I got several emails and messages from gay friends condemning what you guys are doing. My Facebook page is filled with gay friends echoing and supporting my position. People like Andrew Sullivan and Bill Maher are coming out against the efforts to purge businesses of those that differ in their beliefs, as well. You’re not bringing communities together, you’re tearing them apart, creating competing factions within the community and losing sight of the prize: equal rights.

I remember my mom telling me stories about this boy she liked in grade school. She didn’t know how to get his attention, so one time while he was at the drinking fountain, she came by and hit him in the head. He smacked his teeth on the faucet and started bleeding everywhere. The boy never liked her. I think she would have been better off talking to him and showing him kindness.

Brendan Eich is deemed unfit to run the company he helped found, not because he would discriminate in the workplace, but because six years ago he gave money to the Prop 8 campaign, which was supported by a majority of Californians. The Childs family will almost certainly lose their investment in what was an empty storefront they were rehabilitating to open an organic food store, not because they have mistreated gay customers, but because of Chauncy Childs’ personal disapproval of same-sex marriage. Nick Zukin strongly believes in same-sex marriage rights, but because he publicly stated his objection to punishing a business owner for her privately held opinions, his business is now the target of a boycott.

A gay reader of this blog (I leave it up to him to identify himself if he likes) who has campaigned for same-sex marriage and gay rights in general e-mailed last night to say he’s being called a “self-hating homosexual” and a “coward” for objecting to these tactics.

Nice movement for tolerance, diversity, and acceptance you have there. Is this what America has to look forward to? Will America become a place where people are denied their livelihoods because they support traditional marriage, or even, as in Zukin’s case, when they simply express disagreement with the more radical edge of the gay rights movement? Because it looks like this is where we’re headed.