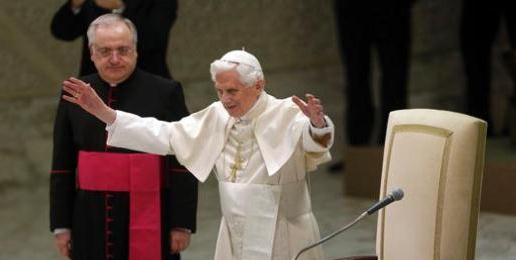 The Pope sent a clear message to gay rights activists who are celebrating gains made this year – the Vatican still thinks same-sex marriage is a ‘manipulation of nature.’

Pope Benedict XVI, right, made it clear during his Christmas speech that the Vatican believes marriage should only be between a man and a woman. Pope Benedict used his annual Christmas message to denounce gay marriage, saying that it destroyed the “essence of the human creature.”

In one of his most important speeches of the year, the Pope stressed that a person’s gender identity is God-given and unchangeable. As a result, he sees gay marriage as a “manipulation of nature.”

“People dispute the idea that they have a nature, given to them by their bodily identity, that serves as a defining element of the human being,” he said at the Vatican on Friday. “They deny their nature and decide that it is not something previously given to them, but that they make it for themselves.”

The Pope has said that gay marriage, like abortion and euthanasia, is a threat to world peace.

In response, LGBT activists staged a protest at St. Peter’s Square. Equally Blessed, a coalition of Catholic organizations in the U.S. that supports gay marriage, repudiated the Pope’s claims. In a joint press release, the groups said that Benedict’s “rigid and outmoded” view of gender identity contrasted sharply with the reality they were witnessing in America – same-sex couples creating happy homes for their kids and transgender people living “healthy, mature, and generous lives.”

“Catholics, following their own well-formed consciences, are voting to support equal rights for LGBT people because in their churches and communities they see a far healthier, godly and realistic vision of the human family than the one offered by the pope,” said the joint statement from Call to Action, DignityUSA, Fortunate Families and New Ways Ministry.

As Pope, Benedict sets both tone and theology for the Catholic Church. Officially, the church still considers homosexuality an “intrinsically disordered” act.

However, 59 percent of Catholics in America favor allowing gay and lesbian couples to marry, according to a poll released this year by the Public Religion Research Institute.

That’s exactly what is worrying the Pope. He fears the opinions people form in their own consciences will lead them away from the doctrines set forth by the church.

“When freedom to be creative becomes the freedom to create oneself, then necessarily the Maker himself is denied and ultimately man too is stripped of his dignity as a creature of God,” Benedict said.

The Pope’s Christmas message comes during a time when advocates for same-sex marriage are gaining ground in the U.S. and Europe. American voters in Maine, Maryland, and Washington endorsed gay marriage at the ballot box in November. A total of nine states now allow marriage between two men or two women. Three additional states officially recognize marriages that were performed outside of state lines, according to the Religion News Service.

Efforts to legalize gay marriage, though controversial, are also being pushed by politicians in several European countries. The Constitutional Court in Spain, where a majority of citizens are Catholic, upheld a law that legalized same-sex marriage last month. The British government will introduce a legalization bill next year. French President Francois Hollande has said that he will enact his “marriage for everyone” plan within a year of taking office last May.

On Friday, Pope Benedict quoted Bernheim, saying that the movement to grant rights to lesbian or gay couples to marry and adopt children was an “attack” on the traditional family unit.

For Pope Benedict, the image of traditional family has not and will not mean anything more than a man, a woman and their children.