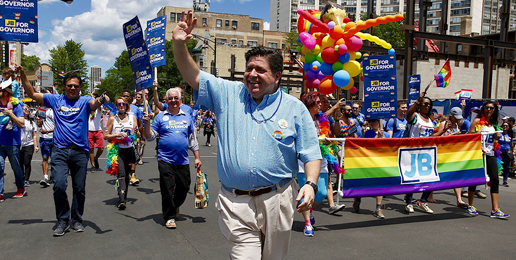 The God-rejecting, science-denying, incoherent “trans” ideology lurches on destroying lives, aided and abetted by ignorant people like Illinois’ Governor J.B. Pritzker who is using an administrative rule to force Illinoisans to pay for “gender reassignment” surgery and risky cross-sex hormone-doping through Medicaid.

The term “gender reassignment surgery” is absurd. Physicians do not “reassign” or “confirm” gender. Nor do they reassign, confirm, or change a person’s sex. The surgery Pritzker seeks to make taxpayers fund in this morally and fiscally bankrupt state is surgery that mutilates healthy bodies in order to enable those who suffer from gender dysphoria to pass as the sex they are not and never can be. Such medical malpractice is lucrative for surgeons and pharmaceutical companies but grievously harmful to its victims. Forcing Illinoisans to subsidize it is a social, political, and moral injustice.

At the same time, however, more and more brave souls are emerging on the cultural scene to fight back against the heart-, mind-, and body-destroying “trans” ideology often at great personal cost.

The number of men and women “detransitioning” grows, and they’re trying to warn others through websites like Sex Change Regret and Pique Resilience Project about the numerous problems—intellectual, moral, social, political, and medical—that are integral to the “trans” ideology.

Conservative and “progressive” women—including self-identifying lesbians—have created an organization called Hands Across the Aisle to oppose the implementation of “gender identity theory” through legislation and to prevent the sexual integration of women’s activities and private spaces.

“Gender-critical” radical feminists like Kara Dansky and lesbians Sheila Jeffreys and Julia Beck (who was kicked off of a Boston “LGBT” commission for her belief that only women can be lesbians and for her refusal to use female pronouns when referring to a male rapist who pretends to be a woman) are speaking out.

The Heritage Foundation has held two panel discussions that included lesbians, radical feminists, conservative Christians, and a man who formerly identified as a woman, all who share in common unstinting critiques of the “trans” ideology. (To watch them, click here  and here)

And websites like 4thWaveNow and Transgender Trend, both started by parents of children caught up in the darkness and delusion of the “trans” ideology, are helping each other and the public at large better understand the dangers posed by the wholesale cultural embrace of the “trans” madness, including the embrace of it by medical and mental health communities, which now results in surgeons performing double mastectomies on 13-year-old girls and castrating 16- and 17-year-old boys.

The newest organization to emerge on the scene is The Kelsey Coalition, “a national group of parents whose transgender-identifying children have been harmed by physicians, therapists, and clinics throughout the US.” The Kelsey Coalition is calling for the term “gender identity” to be removed from the Equality Act and from what are called “conversion therapy bans,” which unjustifiably ban conventional counseling protocols.

The Kelsey Coalition has also mounted a critically important campaign to stop an unethical, ideology-driven five-year study of gender-dysphoric minors funded by taxpayers through a $5.7 million grant from  the National Institutes of Health (NIH)to four “gender” clinics—including one at Lurie Children’s Hospital of Chicago headed up by HIV-positive homosexual pediatrician Dr. Robert Garofalo. A profile of Garofalo—who started Lurie’s gender clinic with a huge donation from J.B. Pritker’s male cousin who masquerades as a woman—in Chicago Magazine at the start of the NIH study makes this disturbing claim:

For now Garofalo’s treatments have to be seen as a radical form of medical improvisation.

This study, begun in 2015, uses children as lab rats to study the effects of puberty-blocking drugs and cross-sex hormone-doping on minors. The Kelsey Coalition’s press release states the following:

This NIH study is a five-year observational experiment in which children are treated with powerful drugs to treat a non-medical condition. The basis for inclusion in the study is little more than a child’s self-identification as transgender. There is no control group….

Young children in the study are given puberty-blocking drugs; older children, cross-sex hormones. There is neither FDA approval, nor a single safety study, to support the use of these medications by healthy children and adolescents. According to Dr. Michael Laidlaw, medical consultant to the Coalition,” These drugs will radically alter their endocrine systems, impact sexual function, and fertility, while putting them at increased risk of developing other serious medical health conditions.”

… “In 2017, the protocol was changed mid-study: the minimum age for cross-sex hormone inclusion was decreased from age thirteen to age eight. According to the 2018 progress report, 19 children have been recruited into the new 8-12 year-old cohort.”

Through this study, taxpayers are subsidizing unethical science experiments on children as young as 8 years old.

We’re paying for quack doctors to suppress or prevent puberty, which irrevocably alters formative adolescent social experiences, making it unlikely that children will ever reclaim a proper and true sexual identity:

The impact on sexuality has not yet been studied, but the restriction of sexual appetite brought about by blockers may prevent the adolescent from having age-appropriate socio-sexual experiences.

We’re paying for the cross-sex hormone doping of minors that is supported by zero research assuring its long-term safety and which leaves children permanently sterile.

While forging ahead in its support for this medical barbarism, UnitedHealthcare Oxford ironically states that,

Clinical evidence supporting the use of GnRH analogs [puberty blockers] for the treatment of gender dysphoria is limited and lacks long-term safety data. Statistically robust randomized controlled trials are needed to address the issue of whether the benefits outweigh the clinical risk in its use.

Medical professionals believe cross-sex hormones may increase the risk of cardiovascular disease, diabetes, blood clots, and cancer. And they believe puberty-blockers may have deleterious effects on bone and neurological development.

Remarkably, even here in the moral and intellectual darkness that engulfs our once great state, glimmers of light offer hope to beleaguered Illinoisans. Two courageous lawmakers are taking bold public stands against the “trans” madness.

Tragically, there are few lawmakers at the state or national level who have the courage and wisdom to take on the “trans” ideology that wreaks havoc on the bodies and minds of men, women, and children; on families; and on the body politic. Illinoisans should support these two courageous and principled lawmakers in every way possible.

Yes, opposition to the “trans” ideology grows but not nearly fast enough. While most Christians lay low to avoid the trials God has promised us and commanded us to count as joy, the “trans” ideology lays waste to the lives and bodies of people for whom we should be willing to lay down our lives.

Take ACTION: Click HERE to send a message to Governor Pritzker’s office to let his administration know that you disagree with the misuse of taxpayer funds for Medicaid so-called “gender reassignment” surgeries.  You can also voice your opinion by phone at (217) 782-6830 or (312) 814-2121.