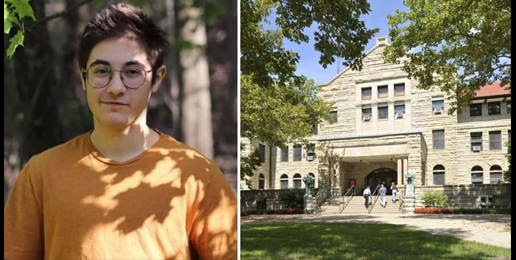 “Peter” Fray-Witzer, a privileged white female student at uber-woke Oberlin College in Oberlin, Ohio claims to have been recently triggered big time by the presence of workmen in her dorm room who came to install a spanking new radiator so Fray-Witzer (birth name “Ava”) would be cozy in her segregated dorm throughout the cold Ohio winter.

In an editorial published in the student newspaper, Fray-Witzer waxed aggrieved that she “had less than 24 hours to prepare for the arrival of the installation crew.” She “was further perturbed by the ambiguous” period of time the installers would be in her room. Evidently, she expected to know precisely how long it would take for workers to install a new radiator. Good luck when she moves into the real world.

The too easily triggered, self-absorbed Fray-Witzer wants all of Oberlin to know that she is “very averse to people entering” her “personal space.” And she wants the Oberlin community to know that the likelihood of the radiator installation crew being “cisgender men” exacerbated her “anxiety.” To be clear, “cisgender men” are normal men. In other words, they are men who accept the scientific reality that they are biologically male and will remain so in perpetuity.

The bewhiskered, male-appearing Fray-Witzer lives in Baldwin Cottage, one of Oberlin’s two housing facilities reserved for women and “trans”-identifying students. If her melodramatic retelling of her response to an ordinary dormitory occurrence is truthful, she is mentally unwell:

I was angry, scared, and confused. … I waited apprehensively. The workers began installing in common spaces, and I could see immediately that they were all men. It was clear that the College had not made a special request that male workers not be allowed onto the upper floors of Baldwin.

How exactly could the terrified Fray-Witzer determine the workmen’s sex, let alone their “gender identities”? By looking at them? By their clothes? Is she a genital policeperson? Does she have x-ray vision? Is she a mind reader? Did she ask for their pronouns? Is she herself controlled by the ugly tyranny of socially constructed gender norms? I thought “transmen” were actually men, and Fray-Witzer is a “transman.” So, is she male or not?

Maybe Fray-Witzer is not as fully woke as she thinks she is. What went wrong? Surely, her wealthy, woke parents, attorneys Evan and Sharon Fray-Witzer, did the best job they could in affirming the “trans” ideology.

By the time Fray-Witzer returned from class, the workpersons who Fray-Witzer assumed were “cisgender males” were done but had to return the next day, which left Fray-Witzer feeling “mildly violated and a little peeved.”

Why would any college student feel violated by the presence of college workmen in her room during the day accompanied, I might add, by a college official? Fray-Witzer explains:

[M]any people—myself included—choose to live there [i.e., Baldwin Cottage] for an added degree of privacy and a feeling of safety and protection. A significant portion of students choose to live in Baldwin because they are victims of sexual assault or abuse, have suffered past invasions of privacy, or have some other reason to fear cisgender men.

Does living in a safe rental place require excluding every member of the feared sex from every setting foot in the safe space for any reason?

Most important, don’t women who have been sexually assaulted or had their privacy invaded by biological males have a right to be free of the presence of all biological males—including males who identify as female—in their private spaces (with the exception of workmen who occasionally have to fix stuff)?

Fray-Witzer’s fears and “gender-normative” assumptions expose the incoherent, self-contradictory nature of the “trans” ideology, which is also exposed by the demands of  “trans” students that they be free to use private spaces intended for opposite-sex students. “Trans” students claim they want to use private spaces with only those whose “gender identities” they share. “Gender identity” is defined as the subjective, internal feelings one has about one’s maleness or femaleness. So, how do “trans”-identifying students know the “gender identities” of the persons in their private spaces? How do they know, for example, whether the boys in boys’ spaces identify internally as boys or whether the girls in girls’ spaces identify as girls?

So, what their demands reveal is that they want to use private spaces with only those who have the anatomy they wish they had. In other words, biological sex as manifest in anatomy is incredibly important for “trans”-identifying persons,” but biological sex is supposed to be meaningless for everyone else.

The truth—something colleges and universities used to pursue—is that biological sex is profoundly meaningful. How we understand embodiment will determine the future of America. How we think about biological sex, what we think about the proper use of our bodies, and what ideas about sex society affirms will determine whether our cultural collapse continues. If individuals, churches, schools, and political parties do not stand boldly for sexual truth, America will no longer be a place conducive to human flourishing. Getting sexuality right is far more important to the health and future of any society than tax rates or business regulations.