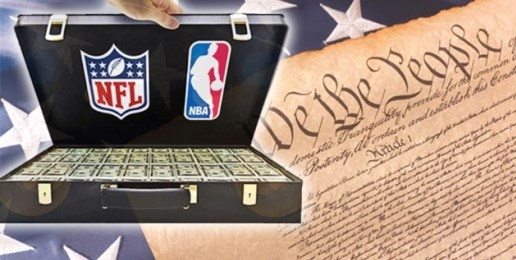 The NFL and the NBA are tackling issues having nothing to do with football or basketball, and they’re putting a full court press on our freedom.

Last week, North Carolina lawmakers — led by the Lt. Governor and leader of the house, ran a backdoor play of sorts to overturn a new Charlotte ordinance known as “the bathroom bill.” As you can probably guess, the bill mandated that Charlotte businesses allow individuals access to the restroom of their choice.

In a specially called session, lawmakers not only overturned Charlotte’s ordinance, they mandated that any public multiple occupancy restrooms and changing rooms in the state be designated for those of the same biological sex, while also allowing accommodation for transgender persons in single-occupancy facilities.

In just about any other time or age than ours, bathroom policies would be an unnecessary area for government involvement. And this particular bathroom policy would seem like common sense for the protection of women and children. And yet it was quickly labeled “anti-LGBT legislation.”

Among those using that nomenclature is the National Basketball Association.

On Thursday, the league announced they may reconsider hosting 2017 All-Star Weekend activities in Charlotte, because of their commitment to “equality and mutual respect.” They apparently missed the irony in taking this moral stand, given that the NBA and WNBA are separate leagues, but Ryan T. Anderson of the Heritage Foundation didn’t, observing on Twitter: “Hey @NBA, you’re against bathrooms based on biology, but think basketball should be?”

Well, inconsistent or not, the financial leverage that the NBA is threatening is significant. And they aren’t the only professional sports league ratcheting up the pressure.

Georgia lawmakers recently passed a bill that, in the words of the Washington Post, “protects pastors from being forced to perform same-sex marriage ceremonies and individuals from being forced to attend such events.” HB 757 also, “allows faith-based organizations to deny use of their facilities for any event they find ‘objectionable’ and exempts them from having to hire or retain any employee whose religious beliefs or practices differ.”

The problem for these lawmakers is that Atlanta is in the running to host a future Super Bowl, and a strange alliance of LGBT advocates, NFL officials, and corporate bigwigs have teamed up to sack the religious liberty legislation.

“NFL policies emphasize tolerance and inclusiveness,” reads a statement released by league officials, “and . . . [w]hether the laws and regulations of a state and local community are consistent with these policies would be one of many factors . . . to evaluate potential Super Bowl host sites.”

Walking lockstep, Atlanta Falcons owner Arthur Blank, who’s sinking hundreds of millions of dollars into a brand new stadium to attract the big game, says, “House Bill 757 would have long-lasting negative impact on our state and the people of Georgia.”

What kind of impact? Well, Disney threatened to stop making films in Georgia and the CEO of Salesforce threatened not to have programs there.

“To paraphrase Joshua,” my colleague Roberto Rivera wrote recently, “the leaders of state and local governments … when asked to ‘choose this day whom you will serve,’ have answered ‘Sports! Money!’ and not in that order.”

So what does this all tell us? That culture matters. And business and sport is part of culture, and clearly in these cases are shaping our political landscapes. Our current comfort level with culture is being challenged, to say the least.

We need courageous, clear-thinking Christians who will make the right call when called upon.