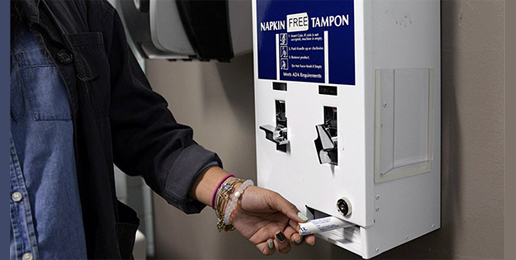 • A boy about 12 years old anxiously tells his father he thinks he just got his first period.

• A man rolls over in bed to reveal blood on his sheets and boxer shorts.

• A twenty-something man checks the seat of his jeans in a mirror to see if he’s leaked blood before going out.

• A high school boy getting books out his locker drops sanitary pads on the floor and a girl—smiling flirtatiously—helps pick them up.

• Three professional colleagues—two men and a woman—are walking together, when one of the men asks for a tampon. The other man—not the woman—pulls one out of his suit pocket and hands it to him.

• A frustrated man in a restroom tries without success to buy a menstrual product from a dispenser that is either empty or broken.

• A man is walking through a men’s locker room in his briefs with a tampon string dangling between his thighs.

• A man is sitting in a stall in a public restroom and a man in the stall next to him passes him a tampon under the stall wall.

• The father of the 12-year-old boy from the beginning of the ad embraces him and says reassuringly, “It’s just part of growing up.”

• A young woman and man are embracing and kissing. He stops and says, “I’m on my period.” She replies smiling coquettishly, “Me too.” They resume kissing but more vigorously and lie down together, presumably on a bed.

The ad concludes with this baffling statement: “If we all had them, maybe we’d be more comfortable with them.”

What do the makers of Thinx panties mean by “comfortable”? It’s true that girls and women don’t particularly like menstruation—it is, after all, messy and often accompanied by physical discomfort—but would they experience less discomfort if men menstruated? Of course not. So, what does “comfortable” mean in the ad? What is their goal with this perverse and unseemly ad? There are two possibilities, both of which are troubling.

It appears “progressives” have again mistaken the virtue of modesty for pathological shame and are trying to eradicate it. They wrongly believe women’s reluctance to discuss personal bodily functions with or in the presence of persons of the opposite sex with whom they are not intimately involved is caused by pathological shame about menstruation. But there exists no epidemic of unhealthy shame among women about menstruation. Most girls and women are completely comfortable talking (and joking) about their periods when they’re among female friends, colleagues, and relatives.

Many women do, however, feel reluctant to discuss menstrual matters with unrelated men—not because of shame—but because of feelings of modesty that naturally develop and can be either respected and reinforced or disrespected, devalued, and undermined. Thinx is doing the latter.

But is it a cultural problem that girls and women exercise discretion when talking about personal bodily functions? Is cultural erosion of modesty a good thing? Is a society where everyone talks openly about their personal bodily functions a better society or a coarser society? Does undermining modesty foster healthier, more respectful relationships between boys and girls, or men and women?

Thinx leaders have another motive for the freakish ad—a motive equally insalubrious.

Thinx is in thrall to the science-denying and destructive “trans” ideology that promotes the preposterous idea that there exist “men” with uteruses who menstruate and “women” with penises who don’t.

The Thinx blog illuminates the transgressive motives behind the mad ad. Here’s the September 26 post from Amber Leventry, a “non-binary” lesbian activist who was sexually abused by a female relative from infancy through age 12 and with her female partner is now raising a daughter and twin sons, one of whom, Leventry claims, began identifying as a girl by 18 months:

Bleeding from your vagina, and everything that comes with it, can suck. But when you are a nonbinary, trans masculine person like me, having a uterus to begin with *really* sucks…. For me, being nonbinary means that I am neither specifically male nor female; I am a mix of two genders.

It is not the responsibility of transgender people to make any physical changes in order to live a life of feeling accepted. Some of us make social transitions by changing our pronouns, name, hair, or clothing. Others make medical changes using hormones or gender affirming surgery. But none of these things need to be the answer to fitting in nor should they be viewed as something we have to do to be accepted. The transition that needs to happen is in the way people understand gender…. That’s why we should stop treating menstruation as an if-then statement.

What we really need to do is normalize the fact that all genders and body types may bleed. It’s hard enough to get your period, but if you are a person who uses the men’s bathroom, it’s a real bummer if you are caught off guard and there are no tampons or pads available. This is why it’s so important to make these products accessible in all bathrooms and locker rooms. And when you talk to your kids (or your friend’s kids or your sibling’s kid) about sex and reproductive health, talk about menstruation. Be clear that some boys bleed and some girls don’t.

Companies that sell menstruation products and their accompanying ads need to present outside of a gender binary and offer support to men, women, nonbinary, and genderfluid folks. This needs to be in language and imagery on their packaging.

Thinx leaders are committed to “menstrual equity” and believe there exists a “universal right” for public school students to be provided with free period products, so they are calling on Secretary of Education Betsy DeVos and “all city councils, school boards, and schools to provide period products for free in all schools restrooms”—and by “all,” they mean all.

No such ad would have been conceivable in a pre-“trans” America where biology, rather than ontological alchemy, held sway over the minds of both the well- and poorly educated masses. Today, however, the masses pretend to believe the emperor is menstruating and needs free pads.