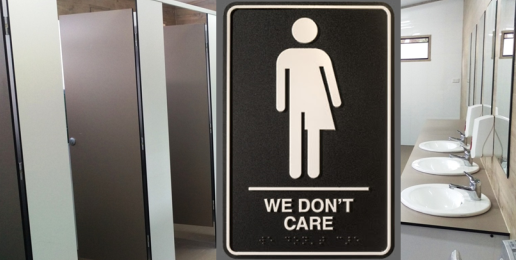 Should the use of public multiple-occupancy restrooms, showers, and changing facilities be based on biological sex or “gender identity”? I think the answer is biological sex.

Before I set out the reason for my answer, here are four clarifications.

Clarification 1. All people are made in God’s image and deserve respect, including those who identify as “transgender.” (To identify as transgender is to feel oneself is, or wishes oneself to be, the opposite of one’s biological sex; a.k.a. gender dysphoria, formerly known as gender identity disorder.)

Clarification 2. According to John G. Stackhouse Jr., “Gender dysphoria in particular, and the wider range of trans issues, are matters disputed at the highest levels of psychological and psychiatric expertise.” (Of related interest: A tracking of children who at one time reported transgender feelings reveals that 70-80 percent of these children spontaneously lost those feelings.)

Clarification 3. The percentage of the general population that is transgender is small, apparently less than 1 percent and perhaps even less than 0.5 percent.

So why do I think the use of public multiple-occupancy restrooms, showers, and changing facilities should be based on biology instead of gender identity?

My reason is simple: prudence.

I think it’s prudent (i.e., an exercise in sound judgment on practical matters) to protect girls and women from the very real possibility of sexual predators and perverts.

No, I am not saying that all transgender people are sexual predators and perverts (though perhaps some are).

We must also protect women and children from the voyeurism of men and boys pretending to be transgender.

In other words, opening physically intimate spaces such as public multiple-occupancy bathrooms, showers, etc. to anyone who claims a transgender identity allows sexual predators to stalk their prey much, much too easily.

Prudence also involves practicality. The fact is that girls and women account for roughly 50 percent of the population whereas (as mentioned) transgenders account for less than 1 or 0.5 percent.

Yes, the well being of transgenders is important. But their bathroom and shower room needs can be easily accommodated by adding some single-occupancy gender neutral facilities. And this can be done without opening all women’s bathrooms and shower rooms to every man or boy who claims he feels female. Ditto for men’s facilities and women or girls who feel they’re male.

U.S. Senator Ted Cruz put it this way: “As a father of daughters, I’m not terribly excited about men being able to go alone into a bathroom with my daughters…And I think that is a perfectly reasonable determination for…people to make.”

Stackhouse puts it this way: “[Government and school] authorities can be sure that many children will be uncomfortable and even traumatized by the presence of members of the other sex in bathrooms, change rooms, gym classes, swimming classes, and the like. To knowingly plan to upset millions of young people in the disputed interests of the very, very few is not enlightened, but [ideologically] doctrinaire.”

So, should any person who claims to feel they are the opposite sex be permitted to use whatever public restroom, shower room, and other related facilities they choose?

The reasonable (and non-transphobic) answer is No.

This article was originally posted at Dr. Henrik’s Apologia blog.