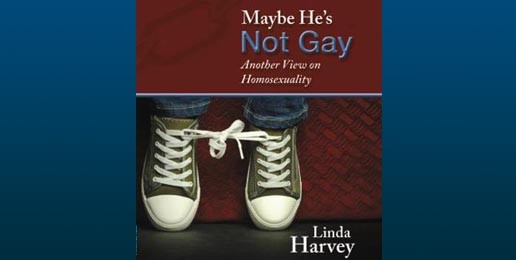 A new book released this week for teens and parents that seeks to address questions about sexual orientation has quickly brought out the long knives of the far left.    As author Linda Harvey observes:

I figured my new book, “Maybe He’s Not Gay,” would create a stir among Christians, but also among the homosexual media. Well, they wasted no time in launching attacks, saying it’s “hateful,” bigotry, will harm kids, etc.  Imagine the place we are at in America that telling our kids heterosexuality is a good thing is supposedly harmful!

And these hysteria-generators dredged up every fabrication about Mission America that’s ever been written, and then the pink mob descended on the book page on Amazon and without having read the book, wrote vicious, insulting reviews.

Linda is one of my heroes in the pro-family Christian movement.  She is a former journalist and media executive who now is a sought after speaker and hosts a national radio show based out of Ohio.  Hidden within this attractive, professional woman, is a real stick of dynamite. She has more courage in one pinky finger than many people have in their whole body.  She isn’t easily intimidated and doesn’t back away from a debate over truth with anyone.  Linda chose to pull her book from Amazon.  Homosexual activists have quickly twisted that into a lie that Amazon pulled the book because of its harmful or inaccurate content.

You can learn more about this helpful book and still purchase a copy of it here at a very affordable price:   http://www.nextcenturystore.com/maybe-he-s-not-gay-paperback.html

Micah Clark
In 1989 Micah Clark graduated from Southwest Baptist University in Bolivar, Missouri with a bachelor’s degree in Political Science. Micah interned as a member of the Indiana House of Representatives’...
Full bio and more from Micah Clark