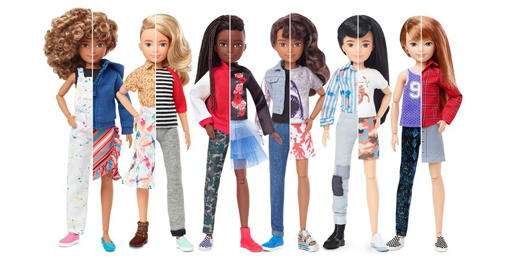 In order to reflect, promote, and indoctrinate children with the radical sexuality ideology of Leftists, Mattel, the toy manufacturer of Barbie dolls, has introduced a new line of “Creatable World” gender-neutral dolls that come complete with boyish- and girlish-looking wigs, clothing, and accessories. Each singular “creatable,” gender-neutral doll comes with its own pronouns, some of which are grammatically incorrect, rhetorically confusing, and biologically ignorant, like “they” or “xem.”

Like Victor Frankenstein, cultural regressives harbor the delusion that humans can create their own ontological and moral world. In their futile attempt to erase the sexual binary and appease the powerful and aggressive “trans” lobby, Mattel painstakingly developed a doll whose features look neither recognizably male nor female, thereby providing yet more evidence that culture is never neutral on moral issues. From this unfortunate business decision, we learn again that culture can either reaffirm truth or undermine it.

[A]s the world continues to celebrate the positive impact of inclusivity, we felt it was time to create a doll line free of labels.

If by “inclusivity” she means welcoming and embracing every phenomenon, idea, feeling, and volitional act, she’s wrong. Not even Leftists celebrate that or view such comprehensive inclusion as positive. If by “inclusivity,” she really means affirmation of the “LGBTQ” ideology, she’s still wrong. The “world” doesn’t celebrate the widespread affirmation of the “LGBTQ” ideology. Huge swathes of people groups around the world reject it and view it as destructive.

As to the label-free claim? Lol. Mattel labeled them “gender inclusive” dolls.

“Trans” activists and their “progressive” collaborators believe that society “conditions” children into believing that biological sex exists and matters. They maintain the peculiar belief that stereotypes precede and shape male and female differences rather than the other way around.

While it is important to avoid imposing too-rigid stereotypes regarding clothing and activities on children, breaking “gender binaries” is a wholly different and destructive pursuit and one that depends on acceptance of Leftist assumptions about sexuality and “gender identity.” Many hold the dissenting belief that it is profoundly good to accept and affirm one’s objective biological sex. Parents and society can help children develop a secure sexual identity or thwart them in that increasingly challenging process.

There are three important truths that get lost in “progressive” discussions of “stereotyping”:

1.) Not all patterns, similarities, or expectations constitute “stereotyping,” and not all stereotyping is malevolent, oppressive, and destructive. Humans recognize patterns and classify like things together. That’s how we make sense of the world. And “stereotyping” is used both for instruction and entertainment. The types on which stereotypes are based and from which they emerge can be good, bad, or neutral. Real persons who share in common, recognizable traits pre-exist the stereotype.

Dana Carvey’s “Church Lady” wouldn’t have been funny or even made sense if we didn’t recognize the character type that actually exists and on whom Carvey’s character was based.  The much-loved movie My Big Fat Greek Wedding wouldn’t have delighted audiences if they didn’t recognize the reality that the film warmly mocks. Tyler Perry’s satirical movies about the character Madea depend on a stereotype that reflects a personality type that actually exists. Will and Grace—the show that homosexuals love—is rife with stereotypes.

2.) Stereotypes often emerge from and reflect anthropological truths—both bad and good. Stereotypes about men and women were not created out of whole cloth or manufactured from the fertile imaginations of patriarchal oppressors. They emerged from patterns humans observe. The cultural movement to normalize homosexuality is founded on the reality of sexual differentiation. When homosexuals say they are romantically and erotically attracted only to members of their same sex, they are implicitly acknowledging the truth that men and women are inherently and significantly different and that those differences are not only anatomical. While stereotypes can reflect and reinforce the good architecture of sexually differentiated human life, they don’t dictate our lives or reflect the totality of any individual person.

Of course, humans, being fallen, sinful creatures, have deformed their roles and responsibilities and denied their God-given natures in myriad destructive ways. Through pride, fear, lust, and selfishness, they have variously abused their natures and abdicated their roles. And unthinking societies have at times become too restrictive regarding what roles men and women could or should assume.

But errors in how cultures think about and respond to sexual differentiation should not lead to jettisoning the valuation and affirmation of it. Sometimes encouraging conformity—including conformity to what the Left views as a “stereotype”—can be not merely a harmless thing but a good thing.

It is good for societies to cultivate respect for and valuation of sexual differentiation through some expectations regarding dress and behavior. It is at minimum benign to paint the nursery walls of a baby girl pink and baby boy blue. It is profoundly harmful for boys to dress and act exactly like girls or vice versa.

Sexual differences are real, substantive, and meaningful, and reinforcing them is good. Culture will either “impose” views that reflect truth or “impose” views that reflect lies. While criticizing social conditioning, Leftists deny the conditioning they facilitate. “Trans”-activists deny that through their actions, they are imposing their dogma on society. In other words, the “trans”-ideology is a social construction. Through pronoun policing; mandatory co-ed private spaces; falsified birth certificates and driver’s licenses; public shaming and epithet-hurling; and cultural indoctrination on a massive scale through control of government schools, academia, the press, the arts, professional medical and mental health communities, and now dolls, public recognition and valuation of sex differences is being eradicated.