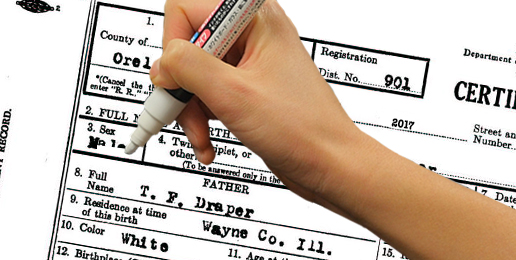 This morning, the Illinois House Human Services Committee held a hearing on a highly controversial proposal that would legalize fraud through the alteration of birth certificates by gender-dysphoric persons who wish to have the government reinforce their deceit.

The bill passed on a party line vote: 7 Democrats voted yea, while 4 Republicans voted no.

State Representative Greg Harris (D-Chicago), who represents a segment of Chicago’s gay community, is one of three openly homosexual members of the Illinois General Assembly and an LGBT activist, is once again pushing this deceit, as he did last session.

HB 1785 would amend the Vital Records Act to allow transgender Illinoisans to easily change their gender and name on their birth certificate. According to HB 1785, all that would be needed is for a licensed health care worker or mental health professional to issue a declaration that the gender dysphoric person has undergone “gender transition treatment,” which doesn’t necessarily include surgery.

Take ACTION:  Click HERE to send an email message to your state representative to ask him/her to reject HB 1785 and uphold birth certificates as legal documents.  The state of Illinois has no duty or right to make it easier for men and women who wish they were the opposite sex to falsify their birth certificates.  Ask your lawmaker to vote NO to the Birth Certificate Designation Act, HB 1785.

IFI’s Laurie Higgins‘ rightly pointed out in an article earlier this year:

[I]t’s critical to remember that cross-dressing, hormone-doping, and surgical mutilations do not turn males into females or vice versa. Compassion and a commitment to truth dictate that we must not treat students who take cross-sex hormones as if they are in reality the sex they are not.

And the government should never be required to participate in a science-denying fiction.

It is staggering to see a modern civilization snookered into accepting (or pretending to accept) the science-denying superstition that surgical tinkering and hormone-doping can turn a man into a woman or vice versa. The ordinary men and women behind the curtain promoting this superstition know full well that no human’s sex can change, so they had to invent new language to confuse and deceive…

Please take action today to let your state representative know what you think of this legislation.  The Capitol switchboard number is (217) 782-2000.

Organizations lobbying in favor of this legislation include:  the ACLU of Illinois, Equality Illinois, Trans-Life Center, and Safe Schools Alliance.