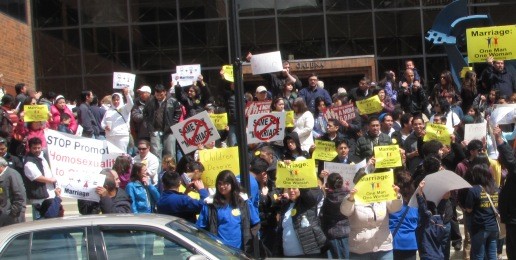 AURORA – Saturday in front of State Rep Linda Chapa-Lavia’s downtown Aurora office, demonstrators from both sides of the gay marriage debate expressed their views. Rep Chapa-Lavia, a Democrat, is one of the few House members that has not made public how they intend to vote on the issue. The supermajority of Democrats in the Illinois Senate passed SB 10 earlier this year, with the  help of one Republican – State Senator John Barickman.

Saying those he was standing with Saturday value the institution of marriage as being between one man and one woman, Hosea Alonso of Bartlett Illinois said a religious awakening is taking place among Hispanics at Bethel Baptist Church …

Other Latino churches were also represented at the rally that believe the defintion of marriage should remain one-man/one-woman, including the pastor of the local parish Rep. Chapa-Lavia attends.