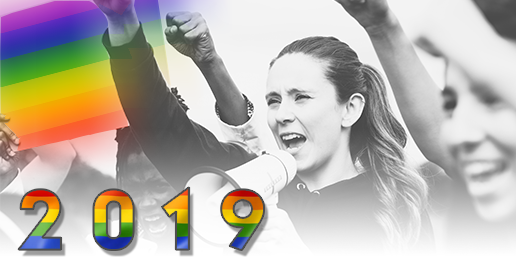 What if I told you that a community of American citizens who are defined by a set of subjective, self-disclosed, and self-defined characteristics and personal behaviors have designated at least 163 days of the calendar year to national and international observances honoring their choices? What if I also told you that the group made up only a fraction of the U.S. population? What would you think?

You would probably have two questions: who are these people and what gives?

Although you probably weren’t aware of these observances, don’t worry. There’s plenty more for you to engage with. Beginning at the end of June with the Stonewall Riots Anniversary, the rest of the year offers:

The only month not represented by any of these annual observances is August, which is kind of like a seventh inning stretch (only longer). After all, you’ve got to take some time off from all that observing!

A couple of the observances are understandable. International Holocaust Remembrance Day and the Pulse Night of Remembrance honor the homosexual victims of both events, none of whom deserved losing their lives to madmen.

But the rest? The most curious thing about all this is the inverse relationship of their minority status with their complete domination of the Gregorian calendar. Eleven million people have staked a claim to 45% of available days which seems, I don’t know, excessive. Imagine some version of the 10-member Glee Club appearing on every other page of the high school yearbook. For comparison, the nine largest world religions representing 5.5 billion people (or about 80 percent of the world’s population) observe 138 days combined. Christianity, the largest of the nine with 2.4 billion followers, only observes 12 days.

A quick analysis reveals four main themes behind the designated LBGTQ+ observances: 1) to raise awareness, 2) to prevent bullying, 3) to honor select people or events and 4) to celebrate. If we break down the 35 observances I cite by theme, here’s what we find (some observances have multiple themes):

This tells us “what gives.” The majority of these observances (28 of 35) are to “raise awareness” and to “prevent bullying,” which account for 95 percent of designated days (156 of 163). The LGBTQ+ community is extremely concerned about educating the rest of us about their proclivities and suppressing any kind of bullying.

I will be the first to say that no one, including members of the LGBTQ+ community, should be bullied. Bullying is cruel and unloving, no matter the reason. “‘Love your neighbor as yourself,’” says Jesus. The only problem with the anti-bullying initiative is that none of those days make a clear and explicit distinction between bullying and moral disapproval. While bullying does happen and should be opposed, one wishes that the LGBTQ+ folks would heed their own advice and stop bullying people like Jack Phillips, Barronelle Stutzman, or Aaron and Melissa Klein.

As far as being “educated” or having my “awareness” raised, does anyone seriously think that we need more awareness of the LGBTQ+ crowd? They are represented in music, film, television, advertising, sports, science, federal government, state government, city government, the military, business, education, children’s programming, legal mandates, law enforcement, dedicated parades and, as of this writing, we have an openly gay (and “married”) man running for president of the United States.

It may be true that back in the 1960s, people who called the LGBTQ+ community home were an obscure minority. But that’s no longer true. What is true is that the over-indulgence of the queer-all-year calendar is no longer just about becoming visible, but about pushing an agenda. In fact, that’s what it’s been all along.

The LGBTQ+ movement isn’t just “educating” us; it is indoctrinating us. It isn’t just opposing bullying; it’s demanding no resistance at all. The 163 days are 163 days of impressions being made on you, your children and our society. It’s how advertising works.

“Because of this repeated ‘nudging’ effect, advertising achieves best results on market share when it maintains a continuous presence and a sufficient weight relative to competition. (We also know this to be largely true because brands, on average, gain or lose share of market when their ‘share of voice’ becomes larger or smaller.)”

As further evidence, in their 1989 book, “After the Ball: How America Will Conquer Its Fear and Hatred of Gays in the 90’s,” Marshall Kirk and Hunter Madsen wrote, “Thus propagandistic advertising can depict all opponents of the gay movement as homophobic bigots who are ‘not Christian’ and the propaganda can further show them homosexuals as being criticized, hated and shunned…” (p. 152-153). Madsen earned “a doctorate in politics from Harvard and was an expert on public persuasion tactics and social marketing.”

The more impressions you receive, the more inclined you are to choose the advertised product over a competitor’s. In this case, the “competitor” is the Church. For example, Chai Feldblum, a lesbian and leading gay rights activist, a former law professor at Georgetown University, and an Obama-era appointee who served almost nine years as the Commissioner of the EEOC, said during an interview in 2006 that she was “having a hard time coming up with any case in which religious liberty should win,” when religious and sexual liberties competed.

“There can be no doubt that Christianity represents the greatest obstacle to the normalization of homosexual behavior. It cannot be otherwise, because of the clear biblical teachings concerning the inherent sinfulness of homosexuality in all forms, and the normativity of heterosexual marriage.”

If you are a believer and you (or your children) participate in any of these so-called “Pride” observances, you have been seduced by a lie. Refuse to participate any longer and “be very careful, then, how you live—not as unwise but as wise, making the most of every opportunity, because the days are evil” (Ephesians 5:15-16).

No group needs 163 days of recognition. It’s all propaganda, part of a master plan for the LGBTQ+ consortium to acquire more power, pressure society into approving sexual anarchy and, ultimately, to destroy the Church.

IFI Fall Banquet with Franklin Graham!
We are excited to announce that at this year’s IFI banquet, our keynote speaker will be none other than Rev. Franklin Graham, President & CEO of the Billy Graham Evangelistic Association and Christian evangelist & missionary. This year’s event will be at the Tinley Park Convention Center on Nov. 1st.