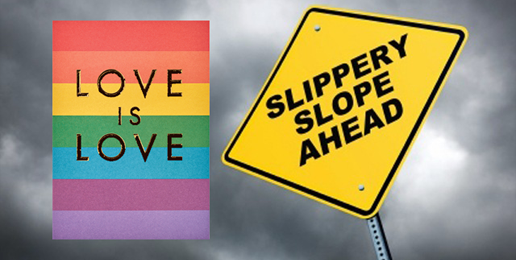 You know that notorious slippery slope that sexual anarchists mockingly dismiss as a figment of conservatives’ hysterical imaginations? Surely, you remember when conservatives argued that public approval of homoeroticism would lead ineluctably to public approval of other forms of sexual deviance. Well, here we are slip-slidin’ down that phantasmagorical slope all greased up with deviant sexuality.

“Trans”-cultism is ubiquitous, poisoning our professional medical and mental health communities; our public libraries; our schools, and children’s bodies.

Polyamory—known euphemistically as “consensual non-monogamy”—is spreading like gangrene on the necrotic tissues of a dying marriage ethos.

Incest is not far behind. What’s my evidence, you ask? My evidence is that the left has given it a name: “Genetic Sexual Attraction.” For now, this phenomenon is defined as a strong sexual attraction between relatives who meet for the first time as adults, but how long will it be before relatives raised together will start ruminating on whether they would like to have sex with their siblings or parents? Remember, “love is love,” and ideas have consequences.

And the next nightmare we see on our careering hurtle down the slope is bestiality, renamed “zoophilia” and “zoosexuality.” Kathy Rudy, Duke University Professor of Gender, Sexuality and Feminist Studies authored a scholarly essay titled “LGBTQ … Z,” for which she provides this abstract:

In this essay, I draw the discourses around bestiality/zoophilia into the realm of queer theory in order to point to a new form of animal advocacy, something that might be called, in shorthand, loving animals. My argument is quite simple: if all interdicts against bestiality depend on a firm notion of exactly what sex is (and they do), and if queer theory disrupts that firm foundation by arguing that sexuality is impossible to define beforehand and pervades many different kinds of relations (and it does), then viewing bestiality in the frame of queer theory can give us another way to conceptualize the limitations of human exceptionalism.

In a trenchant critique of the dangerous ideas of Rudy, Dr. Devin Jane Buckley, points out that Rudy “seems uncertain as to whether she is sexually attracted to her own dogs.”

Queer theory has schooled me in ways that make the question of what counts as sex seem rather unintelligible. How do we cordon off sexual desire from all the other desires that move our lives? What does sex mean? Do I think I’m having sex with my dogs when they kiss my face? How do we know beforehand what sex is?

Leftists no longer know how to define “woman” or “sex.” And these are the people who want to teach the nation’s children about sexuality.

Put differently, both animal rights and psychosocial perspectives [which view desire for animals as mental illness] do not believe that borders can be crossed. Queer theory, on the other hand, tells us that few of us have stable identities anymore, that borders are always crossed. We’re all changing, shifting, splitting ourselves up this way and that. It labels these processes ‘hailing,’ ‘suturing,’ and ‘interpolation’; where once we saw ourselves affiliated in one way, a new interpretive community emerges to capture our passions and move us differently. I am asking the reader to entertain the possibility that the same kinds of shifts and disruptions happen with categories like ‘human,’ ‘rabbit,’ ‘ape,’ or ‘dog.’

There you have it: bestiality, the new transgressive identity slowly emerging from the slimy goo pooling at the bottom of the fictitious slope.

Alexis Tsoulis-Reay, writer for New York Magazine’s The Cut, has twice written about a married man who has a “zoosexual” relationship with his horse. Her first article was “What’s it Like to Date a Horse?” In her follow-up article, “About That Interview I Did with a Zoophile,” just published a month ago, Tsoulis-Reay described her anger when a friend characterized the man into bestiality as having a “horse fetish”:

When one of my friends, an attorney who is married and straight, asked me how my “horse fetish” reporting was going, my first thought was, STFU, you normative bitch! I was genuinely annoyed that she’d described his entire sexual identity as a kink. “It’s a sexuality, not a fetish!” I earnestly texted back to her in all caps.

Here are two of the leftist claims that applied consistently helped create the non-fallacious slippery slope:

1.) Marriage has no inherent connection to either sexual differentiation or reproductive potential, thereby nullifying the requirement that marriage be limited to two people or to people not closely related by blood.

While conservatives have been gullibly playing Candyland, sexual anarchists have been playing chess. Sexual anarchists have strategy; conservatives have strategery. The strategery of Christians in America is notable for its lack of discernment, lack of spine, and a bloated desire to be both in and of the world. Pallid, neutered “niceness,” severed from an understanding of sin has supplanted the love of Christ.

The slippery slope exists all right, but it’s not surprising that the “love is love” crowd can’t see it.