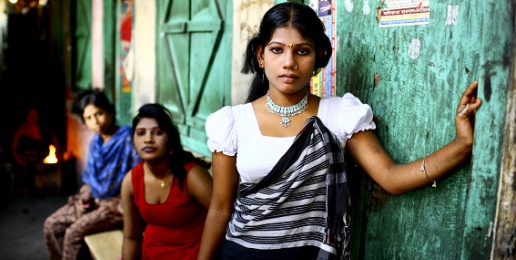 The Hopeless Brothels of Bangladesh
Written By Laurie Higgins   |   09.15.16
PRINT

Hashi, a 17-year-old girl who has been working as a prostitute since she was 10, offers a painful glimpse of Bangladeshi brothel life:

When I first took a customer, I didn’t realize what was going to happen. He raped me again and again. It was bleeding severely and I was crying. I didn’t have any idea what sex is. . . . I used to serve customers one after another during the whole day. I don’t know how many, but I guess I had to serve around 20–25 customers in a day. I found at least four to five customers waiting in front of my room after waking up in the morning. . . . I have no choice to go back to normal life anymore. I have a four-year-old son. I gave him to one of my relatives. I can’t even go to see him for last couple of years.1

It is estimated that there are between 60,000 and 100,000 sex workers in Bangladesh, the only Muslim country in which prostitution is legal.2 According to Action-Aid, as of January 2013, there were 18 registered brothels in Bangladesh, the largest of which, Daulatdia, employs 1,600 prostitutes whose bodies are purchased by 3,000 men per day.3

Journalist Joanna Tovia describes life for 27-year-old sex worker Riya, who has lived over half her life in Daulatdia since she was sold into slavery at age 12:

The rented room in which Riya lives and works is a windowless brick-and-corrugated iron shack measuring 2×2 metres. It has a rusty flap at the front propped open with a long stick. She closes it whenever she is entertaining a customer and raises it again when the job is done. Like the other 1,500 women and girls who work here, the largest of 14 brothels in Bangladesh, her room faces a filthy narrow alley-way, where flies clamour over spilt food and goat faeces, and rubbish collects in sodden, fetid piles. Men, women and children pick their way through discarded coconut husks and garbage and sidestep water stagnating in open drains. They avert their eyes from the sight of naked toddlers meandering through the streets alone while their mothers work.

Witnessing the neglect of young children is one of the hardest aspects of the job for Save the Children project officer Sumona, herself a mother. Being left to fend for themselves may be painful for the children, she says, but it is also difficult for their mothers, who are forced into sex work just to earn enough to live. “The children need their mother’s love and affection but she has no other option,” Sumona says. “It is a very painful situation for a mother to hear her child crying outside the room when she is attending to a customer, but she has no choice.”4

Girls enter brothel life in multiple ways. Some are sold into slavery by impoverished, desperate parents. Some are kidnapped by gangs or individual traffickers, who sell them to brothels. Sometimes men woo and even marry young girls for the purpose of selling them to brothels. And often girls are born and raised in brothels where they will spend their entire lives.

At 15, Faith was forced into an arranged marriage with a man who beat her daily. A local woman offered to help her by finding her domestic work but instead sold Faith, who had a young infant son, into sex slavery at the Daulatdia brothel for $270. When Faith realized that Daulatdia was a brothel, she tried to leave but was stopped by the madam to whom she’d been sold:

Faith’s voice trails away as she pulls up the shirt of her son Nabeeh, now six years old, to reveal an angry scar that extends from his hip to his ribcage. “She picked up a hot frypan and burnt him in my arms. He was 23 days old. Then she said if I tried to leave, she would kill him—and me, too.”5

Thousands of children are born to the women who work in Bangladeshi brothel-villages, growing up in the midst of filth and depravity in brick and corrugated tin shacks with no running water or toilets, and where gutters are choked with used condoms. Mothers often stow their infants and toddlers under their beds while they’re servicing male customers. Many of the boys will be recruited into drug-running and grow up to become pimps, while the girls, like their mothers, will end up working as prostitutes until they reach their late 20s to mid-30s, at which point they will no be longer marketable and, if they’re lucky, will become madams. And, incomprehensibly, brothel life, in which both madams and customers beat the girls, and men seek drug-fueled orgies called “kitty parties,” is preferable to the life of a street prostitute.6

Though girls are required to provide documentation proving they are at least 18 years old, madams easily obtain falsified documents for the young girls they purchase. In reality, the average age at which girls begin their lives in commercial sex is 12. Many girls see between 10 and 15 customers a day and are paid as little as 60 cents per half-hour, but they can make double that amount if they’re willing to forgo condoms. Underage girls, especially young teens, are the most desirable. Although it is illegal in Bangladesh to traffic in minors or to have sex with underage prostitutes, the laws are rarely enforced and convictions are few.7

In addition to young teens, Bangladeshi men prefer girls who are “fuller bodied,” so many madams force their girls to take “medicine” that increases their appetites. One estimate is that 40–50 percent of brothel girls take the corticosteroid dexamethasone (brand names Oradexon or Dexamet), which is used to treat arthritis, asthma, and allergies in humans but is also used by farmers to fatten cattle and by Bangladeshi madams to fatten young girls.8

Dexamethasone can be bought off the streets from untrained, unlicensed, and unregulated “pharmacists” for one or two cents per pill. Long-term use of the drug, which has addictive potential, can result in high blood pressure, increased risk of infections, liver damage, diabetes, osteoporosis, and kidney failure.9

Some brothel prostitutes are independent, which means they are not owned by a madam. Those who were sold into sex slavery are “bonded” prostitutes—or “chukri”—whose dream is to pay off their debt and become independent sex workers. Their debt is the money the madam paid to purchase them. Because the girls make so little money and virtually all of it goes to pay for their rent, electricity, and use of showers and toilets, it takes them years to pay off their debt.

A tragic moral incoherence pervades the Bangladeshi culture, permitting even married men to openly exploit destitute women sold into sex slavery while at the same time holding them in disdain. There is, for example,

Akram Shekh, a 40-year-old jute trader who doesn’t see the double standard in spending three days a week in the brothel with his mistress, a powerful madam with 11 sex workers renting her rooms, while his wife raises their two children at home, plus the daughter he fathered with another Daulatdia sex worker. He has taken in his daughter born to the sex-worker because he doesn’t want to “stigmatise” her.10

Young women like Riya, whose economic prospects are dimming at age 27, know their future is even bleaker than their past because their years of involuntary sexual degradation have made them social pariahs. Tovia reports that just 20 years ago, “sex workers and their children were not allowed to wear shoes and were thrown into the river when they died.”

Conditions today look a little less bleak for brothel workers than they did two decades ago. Sex workers and their children are permitted burials and shoes. Schools and job-training for the children of prostitutes and “safe-spaces” for their daughters are being established, all of which help protect and destigmatize them, thus offering hope for a future free of moral and physical squalor.11

But while conditions slowly improve for Bangladeshi sex workers, they’re not changing quickly enough to offer hope to 16-year-old Maliha:

It is my sin that I was born into this world. . . . Sex work is a very hard job . . . we have to work even if we feel sick or go through menstruation and I feel so helpless when the customers persuade me to do unprotected sex. . . . I am working hard and doing a shameless job to feed my siblings. I know that when they grow up they will say bad words about me. I know that no one will marry me and I do not have any future.12 •