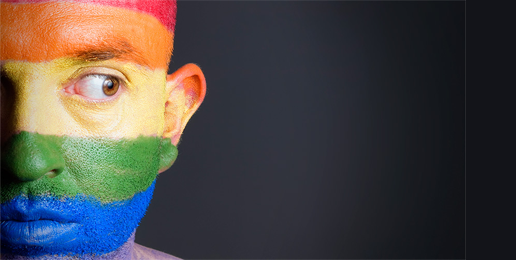 Quick quiz: According to statements published by the U.S. government, where was the shot fired that was “heard round the world”? Lexington and Concord, you say?

Good answer — but you’re only halfway there. There was another “shot heard round the world,” says the National Park Service. That one was in June 1969, at the Stonewall Inn in New York City, where two nights of rioting “led to the development of the modern LGBT civil rights movement.”

The Gay-Rights “Shot Heard Round the World”

You read that right. The U.S. government has co-opted Ralph Waldo Emerson’s deeply symbolic phrase to make the birth of the gay rights movement symbolically equal to the birth of our own country. To fill in the rest of the quotation:

The riots inspired LGBT people throughout the country to organize and within two years of Stonewall, LGBT rights groups had been started in nearly every major city in the U.S. Stonewall was, as historian Lillian Faderman wrote, “the shot heard round the world … crucial because it sounded the rally for the movement.”

There’s history at Stonewall, to be sure. And its reach was indeed global. The month of June is now designated “Pride Month,” and almost 150 gay pride festivals are scheduled in cities around the world.

But what does this mean for true freedom?

The Depth of Our National Confusion

It’s worth noting that Lillian Faderman’s full quote read, “to many homosexuals, male and female alike, the Stonewall Rebellion was the shot heard round the world” (emphasis added).

I give her credit for identifying the group who might have seen it that way. The Park Service’s version leaves that out, making it a statement for us all.

I shudder to think of how celebrations in 2017 would have turned out if Stonewall had happened a week later that year, on July 4. As far as I can tell, the White House has never been lit up in red, white, and blue. We’ve all got images seared on our brains, though, of it lit up in the six rainbow colors of the gay rights movement.

This isn’t just happening on some obscure web page, in other words. The gay rights movement has become America’s new freedom movement. It perfectly depicts the depth of our national confusion.

Freedom Based in the Image of God

For there is “freedom,” and there is freedom.

There is the freedom for which our forefathers fought at Lexington, Concord and beyond. It was a view of liberty rooted in a biblical understanding of what it means to be human.

They knew that humans are made in the image of God. We’re not just today’s snapshot in some ever-changing course of evolution. Instead human nature is a stable, enduring, real. We have a moral nature based in God’s own character. We have a well-designed sexual nature, based in God’s plan for us as individuals, couples and families who build communities and cultures together. We have a destiny based on how we relate to God in Christ and to each other in accordance with God’s design for us.

Argue all you want about whether America was founded as a Christian nation, there’s no denying that our founders’ view of human nature that was deeply influenced by the Bible’s view of humanity. Even Thomas Jefferson, who was no Christian, knew at our inalienable rights come from our Creator. Not government, not courts, not even (later on) our Constitution.

Our founders fought for freedom from political tyranny that kept them from determining their own course. Their fight was never for the “freedom” to do whatever anyone chose, though. Quite the opposite. As Benjamin Franklin said, “Only a virtuous people are capable of freedom. As nations become corrupt and vicious, they have more need of masters.” Freedom was not merely the ability to do as one wanted; it was the ability to do as one ought.

Or Freedom Based in Making Ourselves Our Own Creators

With all thought of a Creator cast aside, “freedom” now means being able to create ourselves after our own wills.

That’s the freedom for which the shots were fired at Lexington and Concord. Stonewall’s freedom has almost nothing to do with that. With all thought of a Creator cast aside, “freedom” now means being able to create ourselves after our own wills. Not satisfied with your sex? Create yourself all over again! Not content with the morality that’s held the Western world together – in spite of various wars and injustices – for centuries? Call it off! Re-make marriage while you’re at it!

And why not? The view now is that nothing about us is fixed. We’re evolving, so we can make ourselves whatever we decide to be. The same goes for human purpose and moral standards: There’s nothing there but what’s evolved over the eons, but we can alter that, too, as we will.

I can’t think of anything else that so clearly shows the depth of our national confusion.

We claim this as a new-found freedom. But we’re like the kite that yearned to fly high and away, free of the string it thought was holding it down. Freedom? No. Free fall.

Yet this is the freedom our own Park Service symbolically equates with Lexington and Concord. The patriotism of red, white and blue is being displaced by the spectrum of the gay rainbow.

America was never perfect. It took us way too long to recognize that human rights belong to everyone. Still we got there in law and (to an obviously lesser, yet still helpful, degree) in practice. The shots fired at Lexington and Concord led ultimately to our country becoming the world’s greatest champion for true freedom. The shot fired at Stonewall is leading us in another direction altogether.

The LGBT crowd will be celebrating their “pride” this month. That’s their choice. Our own Park Service seems to be saying everyone else is obliged to join them. I can’t think of anything else that so clearly shows the depth of our national confusion.

(I owe some of my reflections on this to a conversation this week with John Stonestreet, president of the Colson Center for Christian Worldview.)

This article was originally posted at Stream.org

Stolen Valor and the Campaign to Normalize Homosexuality

Obama Inaugural Speech: The Audacity of a Bad Analogy
b
a
x
r