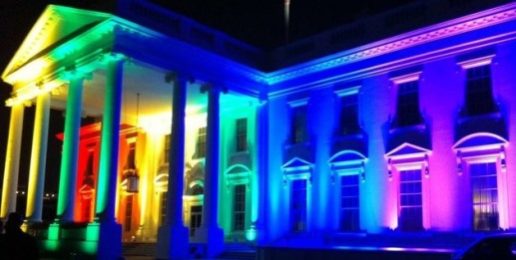 Stolen Valor and the Campaign to Normalize Homosexuality
07.01.16
PRINT

On Friday, June 24, President Barack Obama designated a new national monument at the site of the Stonewall uprising in New York City “to honor the broad movement for LGBT equality”. This was just the latest in a series of speeches and actions on the part of his administration to define down–if not obliterate–any notions of sexual deviance. Worse, to now even memorialize and celebrate it.

I would encourage the reader to take a few minutes to watch the “your-tax-dollars-in-action” White House video commemorating the uprising. The video was released and promoted through the internet on the 24th and was broadcast on the billboards in Times Square on the eve of the NYC Pride Parade.

And now watch, as they say, the “rest of the story“– the true story.

June 24th is not the first time Obama has melded the normalization and celebration of homosexual couplings into the noble movements for women’s suffrage and civil rights for blacks and other ethnic minorities. I’ve lost track of the number of times he’s trotted out the alliterative triad, “From Seneca Falls, to Selma to Stonewall.” Nor is it the first time he has cherry-picked, embellished and even rewritten history in order to push his progressive agenda.

When Obama  spoke at the site of a true historic landmark–the Edmund Pettis Bridge in Selma, Alabama–on the 50th anniversary of the pivotal civil rights march, he rightly observed the suffering the praying, non-violent demonstrators endured at the hands of the police.

“We gather here to celebrate them. We gather here to honor the courage of ordinary Americans willing to endure billy clubs and the chastening rod; tear gas and the trampling hoof; men and women who despite the gush of blood and splintered bone would stay true to their North Star and keep marching towards justice. They did as Scripture instructed:  “Rejoice in hope, be patient in tribulation, be constant in prayer.” ”

But towards the end of the speech, Obama had the audacity to smuggle the so-called right for one man to have sex with another into the same ring of honor, integrity and sacrifice.

“We’re the firefighters who rushed into those buildings on 9/11, the volunteers who signed up to fight in Afghanistan and Iraq.  We’re the gay Americans whose blood ran in the streets of San Francisco and New York, just as blood ran down this bridge.”

This blather, this twisted nugget of unhistorical agitprop, is stunning. And so is the complete pass the comment received from the mainstream press.

When did anyone marching for the right to engage in homosex or use an opposite-sex bathroom get set upon by anyone, much less the police? I’ve covered a number of gay rights parades and protests and all I’ve ever seen are police protecting the demonstrators, sometimes looking the other way while marchers dress and cavort in a manner that would get anyone doing the same things in a different context arrested.

When was any blood shed during these marches, unless it was spilled by the S&M contingency that is invariably present at these parades in major cities? And when exactly did the blood run in the streets of San Francisco and New York like it did during the Selma march?

And how much praying, preaching and seeking to obey the words of Scripture attends these celebrations of hedonism and a “do what thou wilt” sexuality?

And what do you think, the firefighters of 9/11? Soldiers who have risked their lives in Afghanistan? How do you feel about having your sacrifices compared to a phalanx of proverts marching through city streets, throwing condoms and packets of lube out to cheering throngs?

And my black brothers and sisters, how do you feel about having your immutable, genetically determined and morally neutral “race” [ii]—who you are, in other words–conflated with the mutable [iii], genetically non-determinative as well as immoral [iv]actions of others: in other words, what they do [v]?

We’re well on our way to the day when God may set up His own monument in America. It will likely be a grave stone planted in the heart of our nation’s capital. And on it I can imagine His own triad: “Ichabod, Psalm 2:1-6, and Romans 1:18ff.

Not as slick and alliterative as Obama’s. But infinitely more true.

[ii] Bugs me to use the term because there really is only one race–the human one. But you get what I mean
[iii] There isn’t time to develop this here. Suffice it to say, now that they have won the day and the pressure is off to promote the lie that people are born 100% gay, can’t change and can’t have a loving, meaningful and sexually satisfying heterosexual relationship, even staunch LGBTQ activists are more and more acknowledging that sexual attraction is “fluid”–subject to change.
[iv] This would be according to the vast majority of people and religions throughout human history.
[v] Some will disagree with my nomenclature. But through the lens of a Biblical worldview, a person sexually attracted to members of their own gender is not guilty/has not sinned–is in this sense not a homosexual–until they commit a homosexual act.

This article was originally posted at TheApologeticsGroup.com