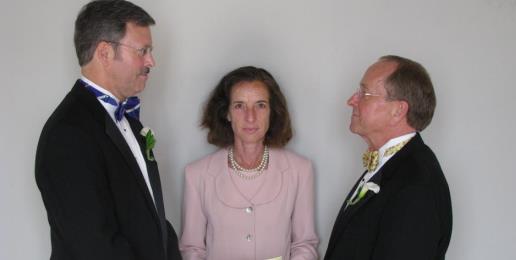 The first openly gay Episcopal bishop, who became a symbol for gay rights far beyond the church while deeply dividing the world’s Anglicans, plans to divorce his husband.

Bishop Gene Robinson has never been fully accepted within the more than 70 million-member Anglican Communion, which is rooted in the Church of England and represented in the United States by the Episcopal Church.

Robinson announced the end of his “marriage” to Mark Andrew in an email sent to the Diocese of New Hampshire, where he served for nine years before retiring in 2012.

OK, first the pink elephant in the room. All of you “bigoted,” “homophobic,” “anti-gay” opponents of “marriage equality” who happen to live in “marriage reality,” please join me as we set aside, for the moment, the inescapable cognitive dissonance associated with the Huxleyan turn of phrase: “plans to divorce his husband.”

Next to the AP’s accurate point that Robinson’s “gay” sin lifestyle and apostate homosexual activism “deeply divid[ed] the world’s Anglicans.” Indeed. Robinson is a self-styled man of God whose only claim to fame is that he selfishly abandoned his wife and children to enter an aberrant sexual lifestyle expressly condemned by the very Bible he ironically calls “holy and sacred.”

Robinson announced the end of his marriage to Mark Andrew in an email sent to the Diocese of New Hampshire, where he served for nine years before retiring in 2012. …

Robert Lundy, a spokesman for the American Anglican Council, a fellowship for theological conservatives, said the argument against gay marriage is based on the Bible and will not be helped or hurt by the dissolution of any one marriage.

“The teaching of the Bible and the Anglican Communion is very clear that marriage is the union of one man and one woman for life,” Lundy said in a phone interview.

In other words, as far as God, the Bible and Christianity are concerned, Robinson’s “marriage” twern’t never a marriage at all. Accordingly, neither is his “divorce” a divorce. Nor is it a sin. In fact, according to a clear reading of scripture, Robinson’s so-called divorce is actually a step in the right direction. It’s a good thing. If going through the motions of a “gay” divorce were in the context of his repenting for his homosexual sin lifestyle, then dissolving this counterfeit “marriage,” which is based solely on a particular sin that God unequivocally calls “an abomination,” would be one of the first steps toward proper repentance and reconciliation with God.

Am I saying I support divorce? No, not real divorce. Do I support the fake “divorce” of two fake “gay married” men? Absolutely. Any Christian should. Again, if this “divorce” were in the context of genuine repentance and the abandonment of that particular sin lifestyle, then it would be something to celebrate for sure. I’ve no doubt Christ would be celebrating. Yes, God hates divorce – the real divorce of an actual man and wife. But God also hates sin. Since “gay marriage” is itself sin, then if somebody ends that particular sin, it stands to reason that this would please God. We are commanded to repent and ask Jesus to forgive us of our sins. The Bible is clear that homosexual behavior is sin. So is apostasy and calling God a liar. Robinson is guilty of both.

That’s why I highly doubt his “divorce” is driven by proper motives – that it’s an actual act of repentance.

To be sure, none of us are without sin and certainly none are less valuable in God’s eyes than any other. But Christ did command us to repent of our sins and to “go and sin no more.” Not only has Robinson refused to repent of his homosexual behavior, which is unambiguously condemned throughout both the Old and New Testaments as sexual sin, he has further rebelled against God by leading astray countless of his flock who suffer from similar temptation.

A fancy white robe and tall priestly hat does not a man of God make. Robinson may or may not be a believer as he claims. Only he and God know that for sure. But what we do know is this: based upon his frequent association with anti-Christian groups like the Human Rights Campaign and the National Gay and Lesbian Task Force, and in light of his ongoing counter-Christian sexual crusade, Gene Robinson is little more than a radical homosexual activist in a clergyman’s clothing. In fact, his heretical rebellion against God’s express natural order, coupled with his selfish refusal to surrender his pulpit after desecrating it, has, as notes the AP, almost single-handedly devastated the U.S. Episcopal Church.

While addressing his sexual appetite for men, Robinson once said, “I believe in my heart that the church got it wrong about homosexuality.”

That’s why Christ admonishes us to place His word above that which we feel in our hearts. As Scripture warns: “The heart is deceitful above all things.”

All of this said, I do feel sorry for Gene Robinson. I feel compassion for him. He’s a broken and hurting man who has allowed lust to rule his life. He’s especially hurting right now I suppose. I encourage all true followers of Christ to pray for Gene Robinson. Pray for the wife and children he left for a lie. Pray that both he and Mark Andrew will repent, “go and sin no more,” and come to a genuine relationship with Christ Jesus.

Without this repentance and subsequent relationship with the Lord of the universe, these two men are lost.

Without it, we all are.