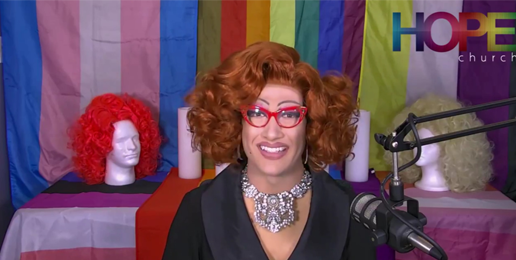 In the message, Simmons, as Ms. “Penny Cost”—a sacrilegious play on the word “Pentecost”—describes the service which followed Palm and Easter Sundays as, “Our way of celebrating and uplifting the voices of drag artistry within the church.” And this was not the first time Simmons has appeared as his drag persona before the church. Other videos of him speaking on various topics can be found by searching the church’s website.

Earlier this year Simmons was unanimously certified as a ministry candidate by the Illinois Great Rivers Conference’s Vermillion River District Committee on Ordained Ministry. He is the first openly gay candidate to be certified by the conference and the first known drag queen to be certified by the United Methodist Church. Simmons told Religion New Service (RNS), “It is mind-boggling simply that it’s 2021 and I’m the first, but also it’s incredibly humbling.”

In addition to his position at the church, Simmons is a student at Illinois Wesleyan University studying Business Management and Religious Studies.

In his daily podcast, The Briefing, Albert Mohler, president of the Southern Baptist Theological Seminary in Louisville, Kentucky, commented on Simmons statement:

This man says that he is shocked, and of course that means offended and disappointed, that his particular move and the move of this Methodist group in certifying for ministry, an undeniably openly gay drag queen. The fact is what we’re looking at here is a revolt against the Christian tradition.

Mohler noted the growing division within the Methodist Church:

And also understand this. Once conservatives are out of the picture in the United Methodist Church, this is only the start of where things will go in the future. And yes, right now, much of it is unimaginable, but it won’t stay unimaginable for long.

In the United Methodist Church General Conference, traditional and progressive churches are struggling for control of the global denomination. In the U.S. many of the clergy have given their support to LGBTQ causes while clergy in African churches continue to support conservative biblical theology. Churches on both sides have been leaving the denomination, while, a group of traditional leaning churches has discussed breaking away to form its own denomination.

Following biblical and traditional Christian theology, churches are to welcome all people including those in the LGBTQ community. However, they are not to affirm behavior that the Bible teaches is sinful. Hope Church not only welcomes those who identify as “LGBTQ” but also affirms sinful behaviors.

First and foremost: we at Hope UMC wish [to] vocalize the fact that all identities, orientations, and bodies are created in the image of the Divine. We are here to affirm, support, and empower you to live your true and authentic life. You are holy. You are loved. You are simply amazing!

The text goes on to indict other Christians and the church for following what the Bible teaches:

For decades, religion and faith has been utilized as a tool of oppression against LGBTQIA+ individuals. This is a vial and evil use of power that should be denounced by institutions of love and grace. We also recognize that the path of unpacking the past and rebuilding new understandings of faith is hard and tiring.

Commenting on the division, Mohler stated,

This is open revolt, and of course, you’re going to see a division between those who are appalled by it, deeply troubled by it, deeply concerned by it and opposed to it on the one hand, and those who celebrate it and say that it’s arrived far too late on the other hand.