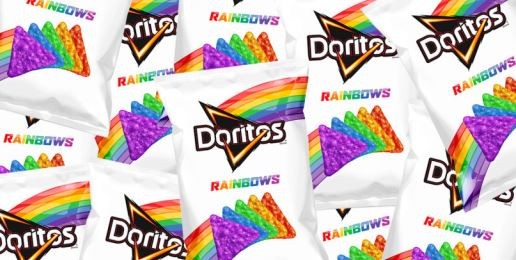 How do you like your Doritos? Original nacho cheese? Cool ranch? Or do you prefer homosexual chips?

That, apparently, is the newest choice that Doritos is giving consumers. The company, owned by Frito-Lay and a division of PepsiCo, announced that they will begin production of “Doritos Rainbow” in partnership with the It Gets Better Foundation. For a mere $10 donation to the non-profit It Gets Better Foundation you can own this “historic” bag of rainbow colored chips.

It’s become the “cool” thing for corporations to do rainbow this or rainbow that in order to show their support for the LGBT movement. Of course one has to wonder if it is more a marketing strategy than anything else. Fatty junk food isn’t exactly popular right now, so one way to jump start sales is to make a big deal of supporting gay people. But let’s assume it’s not a marketing ploy, what’s the purpose?

Every company has the right to support whatever they want. But they must know that by doing so they bear the responsibility of the consequences. For example, I stopped supporting the United Way and Susan G. Komen for the Cure years ago. Why? Because they are partners with Planned Parenthood and, as much as possible, I want to make sure not a single dollar of my money goes to that criminal, vile organization that takes pleasure in profiting from the murder of innocent babies. By the way, that’s the reason I don’t support the Girls Scouts as well.

When I learned that PepsiCo was using the cells of aborted babies in their flavor testing process for various sodas, I immediately stopped buying Pepsi products. In fact, that was nearly 8 years ago. Doritos has every right to support homosexuality. But I have every right to show my disapproval of their decision by not buying their products. Just as I show my support for Chick-Fil-A’s position on marriage by eating there as often as possible.

Now let’s talk about the real irony and near stupidity of this decision by Doritos.

Doritos is issuing these rainbow chips for a $10 donation to the It Gets Better Foundation. In case you didn’t know, this foundation was started and is operated by Dan Savage. Dan Savage is one of the vilest human beings on this planet. As a homosexual man, Savage takes every opportunity to verbally dehumanize every person that remotely disagrees with him. Dan Savage is, essentially, a bully operating an anti-bullying organization.

What makes Savage such a bully?

There’s not enough time or space to write all of the offensive and derogatory statements Savage has made about Christians, conservatives, people of faith, or heterosexuals. I will, however, leave this one statement from a newsbusters article for your consideration:

“In his books Savage penned that Christian conservatives ‘march in lock-step with Osama bin Laden and his Islamo-fascist buddies.’ He compared Christians to the 9/11 terrorists and Adolf Hitler, obscenely mocked Catholicism labelling Catholic priests ‘altar-boy raping celibates,’ gleefully took the Lord’s name in vain, wished Christians dead, and said being a Republican is like having terminal cancer. In his sex -advice column ‘Savage Love’ the anti-bullying crusader referred to heterosexuals as ‘breeders,’ a derogatory gay pejorative for straight people, since they can procreate and gays cannot. ‘Savage Love’ found its author heartily encouraging his readers to engage in child molestation fantasies, bondage, drug use, affairs, three-ways, incestuous relationships and other disgusting sexual acts.”

It would seem that partnering with someone that bullies others is a career-ending affair. Unless you’re Dan Savage and you are bullying Christians and conservatives. In that case it is apparently acceptable. And while most partnerships would be immediately dissolved with the revelation of such atrocious comments, Doritos has made a decision to partner with Savage and his organization. For that matter, President Obama is quite proud of Savage as well. (Click here to read more comments by Savage.)

Let’s suppose a pudding company agreed to send rainbow pudding cups to every person that donated $10 to Westboro Baptist Church. How well do you think that would go over? How long before the pudding company was forced out of business because of their “intolerant” and “bigoted” partnership? I dare say it would be just days before the media circus would abruptly end the budding partnership.

Yet Doritos is partnering with a foundation that openly spews vile comments at Christians and conservatives in the exact same way Westboro does towards homosexuals and no one sees a problem with that.  But I’m betting the campaign and partnership can indeed be brought to an end by simply refusing to buy Doritos products. If money is their goal then the lack of money will end this campaign.

Like I said before, if Doritos wants to make rainbow chips and push a dangerous sexual agenda they have that right. It just means I will find another snack for my Monday Night Football party. But if they want to partner with a discriminating, bigoted bully to do it, well, that’s another matter entirely. If Doritos and San Savage truly care about equality then they both need to support equal respect for all people; including those that disagree with them.

Take ACTION:  Contact the Frito-Lay company to let them know what you think of their choice to support the radical LGBTQ agenda.  You can call the customer service line at (800) 352-4477