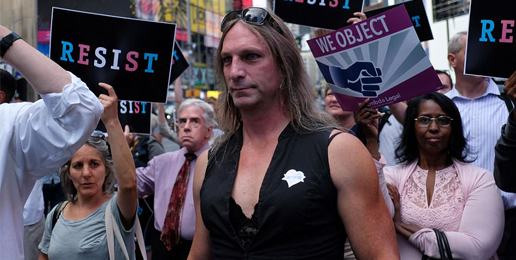 Congressional Resolution Calls for the Military to Accept Transgenders
Written By   |   04.02.19
PRINT

A non-binding resolution which would force the armed forces to disobey the directive of Commander-in-Chief President Donald Trump and compromise national security has passed in the U.S. House of Representatives. The deeply-flawed resolution (H.Res. 124) is replete with “LGBT” ideology and is a continuation of the radical social agenda of the previous administration.

The resolution passed on a vote of 238-185, with the entire Democrat caucus supporting it and virtually all Republicans opposing it. The Illinois Congressional delegation voted along partisan lines.

The resolution’s sponsor, U.S. Rep. Joe Kennedy (D-MA), claimed that current policy amounts to “targeted discrimination,” and said the House vote assures transgender people “that they cannot be banned from military service because of who they are.”

Sarah Kate Ellis, president and CEO of the “LGBT” advocacy organization GLAAD expressed satisfaction with the resolution and demanded that the administration get on board: “It’s a welcoming reassurance that the elected leaders in the U.S. House support the more than 13,000 brave transgender service members who proudly dedicate their lives to our nation. It’s time for President Trump to drop his proposed ban and stand with transgender patriots putting their lives on the line to keep us all safe.”

The roots of the administration’s opposition to those who choose to identify as homosexual or “trans” serving in the military go back to 2017 when a panel of experts commissioned by former Secretary of Defense James Mattis assessed the effects of accepting persons suffering from a psychological condition called gender dysphoria into the military. The panel’s results indicated that “trans”-identifying individuals have complex medical issues as well as high rates of suicide.

Moreover, treatments that are approved by “progressive” “experts” failed to lead to a more positive outcome. In their testimony before Congress, all four service chiefs claimed they had not seen moral or unit readiness problems with “trans”-identifying troops currently serving but also acknowledged that commanders were forced to spend an inordinate amount of time dealing with the medical and “transition issues” of “trans”-identifying soldiers.

A year later President Trump endorsed the findings of the panel and proposed a nuanced policy regarding “trans”-identifying persons in the military, the details of which are expected to be released on April 12. In short, the new policy bars people from enlisting who have pursued chemical and surgical interventions in their quest to pass as the opposite sex.  In a move that will likely be a focal point for opponents, it requires active duty military personnel to serve as their immutable biological sex, except for those who had already begun medical interventions under the previous administration rules.

Concurrently, the Department of Defense released a study which noted five key points that address combat lethality, military readiness, and troop morale. The study included detailed graphs which outline the principles behind the Trump/Mattis policy.

Meanwhile the new policy regarding “trans”-identification continues to wind its way through the court system.  The District of Columbia Court issued a preliminary injunction against the Trump/Mattis “trans” policy, which was overturned by the Court of Appeals for the District of Columbia. One of the members of the three-judge panel, Judge Stephen F. Williams wrote this regarding a related case, Jane Doe 2 v. Trump:

[Transgender plaintiffs’] claims are fundamentally flawed in almost every respect. They give short shrift to the findings of a panel of military experts commissioned by the secretary of defense. They never grapple with the fact that the presidential tweet, on which they place so much weight, post-dates–rather than ante-dates–the decision of the secretary to reevaluate the previous administration’s policies.

There is a good chance that the Trump/Mattis “trans” policy will prevail when the case comes before the U.S. Supreme Court. Already the Court has narrowly ruled 5-4 that the transgender policy can continue to be implemented as ongoing litigation proceeds. Citizens should encourage their representatives to oppose H. Res. 124, which rejects the sound Trump/Mattis “trans” policy in favor of imposing the radical, science-denying “trans” ideology on the United States military, the detrimental consequences of which are incalculable.

Donald Trump, the Media, and the Principle of ‘Don’t Trust, Verify’

Hatred Animates the Left
b
a
x
r