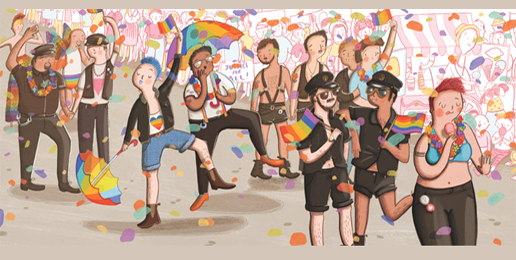 Children’s Book ‘This Day in June’: Propaganda for Children Available at Your Local Library
Written By John Biver   |   08.25.17
PRINT

Picture this: You’re at the library with your three-and-a-half-year-old daughter whose attention is grabbed by a colorfully illustrated children’s book. She takes it off the shelf and asks you what the book is about.

You are happy to oblige until you see that this colorfully illustrated children’s book is about promoting many aspects of the LGBTQQAP (etc.) agenda.

This is what happened recently to Kurt and Michaela Jaros. Fortunately, Michaela was quick to utilize her mothering skills and answer her daughter’s question without providing a sex ed lesson on the spot.

The book the Jaros’ daughter pulled from the shelves of the West Chicago Public Library is titled This Day in June.  Here is the description from the book’s Amazon.com page:

In a wildly whimsical, validating, and exuberant reflection of the LGBT community, This Day in June welcomes readers to experience a pride celebration and share in a day when we are all united. Also included is a Reading Guide chock-full of facts about LGBT history and culture, as well as a Note to Parents and Caregivers with information on how to talk to children about sexual orientation and gender identity in age-appropriate ways. This Day in June is an excellent tool for teaching respect, acceptance, and understanding of lesbian, gay, bisexual, and transgender people.

Not to Kurt Jaros, who has taken up the issue with the West Chicago Library Board.

Jaros explains that since libraries work together through inter-library loans, if one library has it, it will be available to regional libraries as well. Therefore, one need not live in the West Chicago Library district make a statement at the meeting.

Jaros further noted that libraries often do not receive enough public comment on controversial issues. He has set up a website to rally support for the effort to have the book either removed from the shelves or be placed where children do not have access to it, as many libraries do.

Some argue that having this and similar books removed from library shelves is “censorship” or “book burning.” As with everything else, Leftists can’t quite grasp the fact that taxpayer have a say in how their tax dollars are spent.

Jaros explained that from cover to cover, This Day in June is filled with pro-LGBTQQAP (etc.) propaganda presented through symbols and messages. He prepared a flyer to provide examples from the book. (This disturbing book is written by Gayle E. Pitman and illustrated by Kristyna Litten.)

Library board member David Reynolds also spoke with IFI about the offensive nature of the book and the inappropriateness of allowing children to have unsupervised access to it. Libraries remove books from shelves all the time for various reasons, he said, but the effort to have this book removed is creating the equivalent of a “constitutional crisis.”

Controversial books should not be placed where children can easily step on cultural land minds, Reynolds said. Books like This Day in June should, at a minimum, be moved to a separate parent/teacher collection as is the policy at many libraries.

Anyone who doubts that “LGBTQQAP” activists and their “allies” are pursuing the hearts and minds of other people’s children should watch this sweet, well-crafted, animated short film about an adorable, red-headed, closeted middle school boy whose secret crush on another boy is exposed when his anthropomorphized heart leaps from his chest and pursues the boy with whom the main character is besotted.

This Day in June too seeks to capture the imaginations of young children:

Here is a paragraph from that Laurie Higgins’ article reworked to apply to This Day in June:

The book’s creators are making the implicit argument that the biological sex of humans is irrelevant to the morality of sexual activity. Leftists use the adolescent slogan “love is love” to distract the public from the central issue—which pertains not to love but to sex. The central issue concerns sexual morality and sexual boundaries. The Left seeks to skirt that issue by dangling vivid illustrations and rhyming couplets in front of vulnerable and manipulable children.

None of the “profoundly important questions about sexual morality matter,” Higgins writes, “in a culture where cartoons shape feelings—nothing more than feelings.”

IFI also spoke with a veteran of the public library systems who noted the Leftist slant from the local level on up to the Illinois Library Association (ILA) and the American Library Association (ALA). “Libraries do not need to carry these kinds of books,” she said, but often do because so often they are lobbying for one side of a political argument.

Take ACTION: Click HERE to send an email or fax to the West Chicago Library Board of Trustees, urging them to reject policies that spend tax resources on politically controversial and deviant books targeted at young children.  You may want to point out that this is not an issue of free speech but rather of book selection policy.

More ACTION:  If you are a local resident, please try to attend this meeting, and try to arrive by 6:30 to sign in to make comments, which are limited to three minutes. You may want to type up your comment and read it so as to ensure you don’t exceed the three-minute limit.