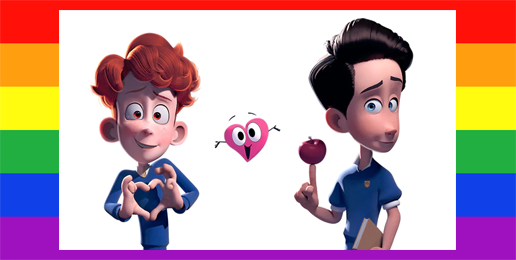 Anyone who doubts that “LGBTQQAP” activists and their “allies” are pursuing the hearts and minds of other people’s children should watch this sweet, well-crafted, animated short film about an adorable, red-headed, closeted middle school boy whose secret crush on another boy is exposed when his anthropomorphized heart leaps from his chest and pursues the boy with whom the main character is besotted.

The award-winning film titled “In a Heartbeat” was posted on YouTube less than a month ago and already has well over 27 million views.

The middle-school boy, literally and figuratively hiding, sees his beloved walking into school reading a book by homosexual writer Oscar Wilde and absent-mindedly tossing and catching an apple. (Is this an intentional allusion to grade school innocence or an inadvertent allusion to the forbidden fruit, the eating of which constituted rebellion against God and resulted in the fall of man?)

The freckle-faced, red-haired boy’s pulsing, panting, love-struck heart bursts forth and soars after the object of his affection, pausing momentarily to stroke the hair of the beloved, and in so doing exposes his crush to the disapproving faces of censorious peers. The freckly boy grabs his heart which splits in two, and he flees the schoolhouse, seeking refuge again in the shrubs—his metaphorical closet—all accompanied by heartstring-tugging music. Not to worry, though! All ends well when his love interest suddenly shows up, bringing the other half of his broken heart to him, restoring it to wholeness. And there in anti-Eden, homoerotic love blooms.

The Left uses this silly slogan to promote without proving the moral proposition that it is as morally legitimate for two people of the same sex to engage in erotic activity as it is for two people of opposite sexes to engage in it.  The film’s creators are making the implicit argument that the biological sex of humans is irrelevant to the morality of sexual activity. Leftists use the adolescent slogan “love is love” to distract the public from the central issue—which pertains not to love but to sex. The central issue concerns sexual morality and sexual boundaries. The Left seeks to skirt that issue by dangling an anthropomorphized heart in front of vulnerable and manipulable children.

And those who believe in a solely materialistic universe are going to have a really hard time explaining the source of their moral beliefs about whichever types of sexual activity they deem immoral.

But none of these thorny moral inconsistencies matter to those so irrational and corrupt that they no longer recognize or respect the reality and meaning of male-female differentiation.

And none of these profoundly important questions about sexual morality matter in a culture where cartoons shape feelings—nothing more than feelings. In Amusing Ourselves to Death, Neil Postman warned that “Americans no longer talk to each other. They entertain each other. They do not exchange ideas, they exchange images. They do not argue with propositions; they argue with good looks, celebrities and commercials.” And even with cartoons for children.