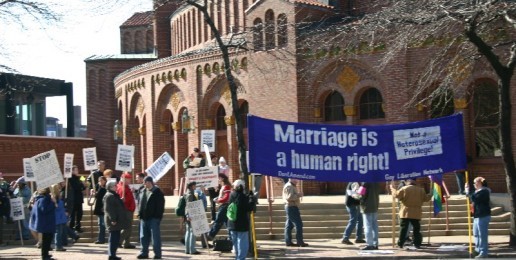 Organizers of Chicago’s annual celebration of sexual deviancy, oxymoronically named the Chicago “Gay Pride” Parade, decided to change the parade route and time for the 2012 parade. This change would have resulted in the disruption or cancellation of the 10:00 a.m. mass at Our Lady of Mount Carmel Church.

In the face of silly demands by homosexual activists that he resign or apologize, Cardinal George instead offered the following clarification:

“Organizers [of the parade] invited an obvious comparison to other groups who have historically attempted to stifle the religious freedom of the Catholic Church…One such organization is the Ku Klux Klan which, well into the 1940s, paraded through American cities not only to interfere with Catholic worship but also to demonstrate that Catholics stand outside of the American consensus. It is not a precedent anyone should want to emulate.”

As is their wont to do, homosexual activists — ever the embodiment of tolerance and freedom — became livid over Cardinal George’s analogy. As too is customary for homosexual activists, they seem to believe their indignation and “hurt feelings” serve just as well as an actual argument.

Here are some of the responses of prominent homosexual activists to Cardinal George’s comments:

He has crossed so far over the line of basic decency that he couldn’t see it with a pair of binoculars…This outrageous comparison of the LGBT community to the Ku Klux Klan was so degrading… that apologizing will not be sufficient….If he has a shred of dignity and a shard of class he will immediately step down. (Homosexual activist Wayne Besen, Founder of Truth Wins Out)

As a lay Catholic, I am profoundly saddened that Cardinal Francis George defiles his office by comparing our LGBT family, friends and fellow Catholics to the Ku Klux Klan. (Catholics for Marriage Equality)

This is a sacred time of year for many people of faith, a time when we should be creating and cherishing unity in our communities-not casting about dangerous and divisive rhetoric. (Human Rights Campaign)

How ironic that those who defend a parade that celebrates sexual perversion and violates public indecency laws would describe Cardinal George’s rhetoric as indecent, degrading, undignified, and defiling. It is homosexual acts that are indecent, degrading, undignified, and defiling. We would do well to remember the words of Isaiah: “Woe to those who call evil good and good evil, who put darkness for light and light for darkness, who put bitter for sweet and sweet for bitter!” In reality, homosexuality is a sin so serious that Scripture warns that those who engage in it will not inherit the Kingdom of God.

As such, affirmation of homosexuality would be a desacralizing act. Unity and peace are goods to be sought but never at the expense of truth and never with the “unfruitful works of darkness.” Jesus says, “Do you suppose that I came to grant peace on earth? I tell you, no, but rather division.” If we truly love those who experience same-sex attraction, we will speak the truth about homosexuality, offer them the hope that is found in Christ alone, and come alongside them as they seek to pursue holiness.

Cardinal George’s analogy is fair and apt. Many homosexual activists harbor unconcealed hatred for not only the Catholic Church but also for all Protestant denominations that hold orthodox views of homosexuality. And these homosexual activists openly express their hatred in vile and vitriolic rhetoric. If Fox Sunday Chicago reporter Dane Plancko is unaware of this, he needs to do more research.

The salient question for conservatives is, “Does the analogy work?” In other words, are there points of correspondence between the two ideas or phenomena being compared, and are the points of correspondence relevant to the issue or issues being debated? Whether it offends the sensibilities of those who choose to make their unchosen homosexual attractions central to their identity is irrelevant.

If every Catholic parish and every Protestant church had a leader who would speak the truth about homosexuality with the clarity, conviction, and courage that Cardinal George did, perhaps we could end the sorry spectacle of the Chicago “gay pride” parade for good.

To read more on the attitudes and actions of homosexual activists to Christian orthodoxy, please click on the following links:

‘Safe schools’ chief was member of radical Act Up (WorldNetDaily.com)