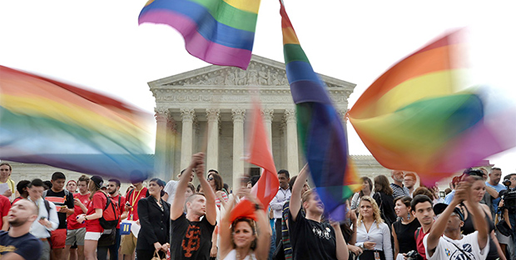 Can Homosexuality Spread Via Culture?
Written By Laurie Higgins   |   09.10.19
PRINT

Much of what the homosexual community (i.e., those who choose to place their unchosen homoerotic desires at the center of their identity) claims is false, and increasingly they’re being forced to admit their claims are false. Some of these claims may have been born out of ignorance, others out of a deliberate strategy to deceive. For example, for decades the myth that homosexuals constitute 10 percent of the population continued to be disseminated by homosexuals and their ideological allies long after the statistic had been thoroughly discredited. It was used to promote implicitly the idiotic and destructive idea that the number of people engaging in an act or affirming an “identity” indicates something about the morality of the act or “identity.”

Perhaps the most destructive myth still being promoted has two parts, both false. The first part is that homosexuality is a fixed and heritable condition. The second part says that since homoerotic interest is fixed and biochemically determined, it cannot be transmitted via the environment. Only those born with the determinative biochemical factors will experience homoerotic attraction—or so the homosexual community asserts. This false belief resulted in homosexuals mocking conservatives for their concern that exposure to positive ideas about and images of homosexuality may result in an increase in homoerotic activity.

Now, however, we know there is no single gene for homosexuality. A “genome-wide association study” published in the professional journal Science on August 30, 2019 has made a big media splash for confirming what has long been assumed by scientists: There is no “gay” gene. Unlike skin color or biological sex, homoerotic desire is not biologically determined.

In fact, the researchers (apparently reluctantly) made two interesting admissions. First, they admitted that the genes that may influence same-sex attraction also influence other predispositions:

These aggregate genetic influences partly overlapped with those on a variety of other traits, including…. smoking, cannabis use, risk-taking, and the personality trait “openness to experience.”

Might cannabis-use, risk-taking, and openness to experience lead to experimentation with diverse forms of sexual deviance?

Second, they admitted the influence of environment:

The prevalence of homosexuality in ancient Greece and Rome and in Japan during the Tokugawa period was not a function of an altered gene pool or other biochemical differences but, rather, of differences in cultural views.

Sara Reardon writing in Scientific American explained in layman’s terms more about what the research team did and what their study reveals:

They asked more than 477,000 participants whether they had ever had sex with someone of the same sex, and also questions about sexual fantasies and the degree to which they identified as gay or straight.

The researchers found five single points in the genome that seemed to be common among people who had had at least one same-sex experience…. But taken together, these five markers explained less than 1 percent of the differences in sexual activity among people in the study. When the researchers looked at the overall genetic similarity of individuals who had had a same-sex experience, genetics seemed to account for between 8 and 25 percent of the behavior. The rest was presumably a result of environmental or other biological influences.

Despite the associations, the authors say that the genetic similarities still cannot show whether a given individual is gay. “It’s the end of the ‘gay gene,’” says Eric Vilain, a geneticist at Children’s National Health System in Washington, D.C., who was not involved in the study….

The authors say that they did see links between sexual orientation and sexual activity, but concede that the genetic links do not predict orientation.

Here’s an odd bit of political rhetoric highlighted in the scientific study itself:

The topic explored in this study is complex and intersects with sexuality, identity, and attraction and potentially has civil and political implications for sexual minority groups. Therefore, we have… [e]ngaged with LGBTQIA+ advocacy groups nationally and within our local institutions…. We wish to make it clear that our results overwhelmingly point toward the richness and diversity of human sexuality. Our results do not point toward a role for discrimination on the basis of sexual identity or attraction, nor do our results make any conclusive statements about the degree to which “nature” and “nurture” influence sexual preference.

Why would politically neutral, objective hard science researchers engage with “LGBTQIA+” activists about their research at all? And why include references to intersectionality, “sexual minority groups,” “richness,” and “discrimination”? They explained that the reason for their momentary deviation from science was that “there is a long history of misusing genetic results for social purposes.”

I couldn’t agree more. The homosexual and anti-life communities have long misused genetic results and theories to advance their pernicious cultural agendas.

But mainstream journalists either haven’t been aware of these ideas about “sexual orientation” or realized the political implications of them and feared the response from the tyrannical “LGBTQ” community if they exposed them.

We know that ideas and images can influence desire and volitional acts. Homosexuals have been wrong, and conservatives have not been concerned enough about the influence of pro-homosexual ideas and the pervasiveness of positive images of homosexuality in network and streaming shows, movies, advertising, newspapers, magazines, pornography, and government schools.

The misdirection or disordering of the sex drive can result from abuse as well as exposure to both ideas and images. The extirpation of the taboo against homoerotic acts opened the door to intellectual exploration of the desirability of homoerotic acts as well as experimentation. We will see more homosexual activity and relationships in “civilized” countries that have exalted subjectivism, radical autonomy, sexual libertinism, and rebellion against social norms, while undermining the nuclear family, theological orthodoxy, the notion of a common public good, and sexual taboos.

Let’s look at pornography for a better understanding of the effect of culture on the spread of body-, soul-, and family-destroying sexual deviance.

The National Center on Sexual Exploitation reports that

Men were not born with a biochemically determined predilection for rape. Men, like women, are born with a fallen nature that makes them vulnerable to all sorts of sinful desires and acts. Ideas and images can shape the direction of our sinful acts. The sex drive is a powerful impulse that can be misdirected toward diverse inappropriate objects and activities.

Now that the culture at large has embraced first homosexuality as an immutable “identity” that can’t be judged and then homoerotic activity as morally benign, it won’t easily relinquish the pleasures of hedonism when foundational lies that led to acceptance are exposed. That this anti-culture movement has flourished based on a foundation of lies won’t matter to a non-rational society.