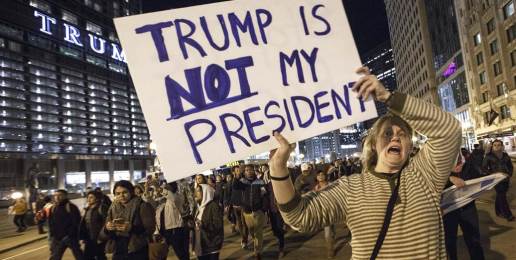 California College Instructor Caught in the Act of Being a Leftist
Written By Laurie Higgins   |   12.15.16
PRINT

*WARNING: NOT SUITABLE FOR CHILDREN*

Orange Coast College, a community college in Costa Mesa, CA, employs Olga Perez Stable Cox to teach classes on human sexuality. During a recent human sexuality class, Cox went on an anti-Trump/anti-Pence/anti-conservative rant which was recorded by a student and posted online. In it Cox is heard calling President-Elect Donald Trump a “white supremacist” and Vice-President-Elect Mike Pence “one of the most anti-gay humans in this country.” She further described the election of Trump as an “assault” and “an act of terrorism.”

Then in an act of astonishing hubris and irrationality, Cox condemns everyone who voted for Trump:

One of the most frightening things for me and most people in my life is that the people creating the assault are among us. It is not some stranger from some other country coming and attacking our sense of what it means to be an American and the things that we stand for and that makes it more painful because I’m sure that all of us have people in our families and our circle of friends that are part of that movement and it is very difficult.

There is a second, less-viewed video in which Cox expresses her happiness that Orange County, California where she lives voted Democratic, saying that “Living in Orange County is scary” because it’s conservative.

Apparently not noticing the irony, Cox goes on to say that she is committed to keeping her “classroom safe.” In the service of “safety,” she tells students she will provide phone numbers they can call if they “find anyone being racist, or in any way prejudiced, or treating you in an unfair way”—with “unfair” being determined by Leftist assumptions. Last time I checked, it’s as legal to be a racist bigot as it is to be an anti-Christian or anti-conservative bigot.

Two students also report that Cox “tried to get everyone who voted for Donald Trump to stand up and show the rest of the class who to watch out for and protect yourself from.” She has a very odd way of making conservative students feel (in “progressive” parlance) “safe.”

Here’s a bit more on Cox who has no academic degrees in political science and was not hired to pontificate on matters political. She is a 64-year-old lesbian with a bachelor’s degree in sociology and a master’s degree in “Marriage, Family, and Child Counseling.”

On her faculty bio site, there is no curriculum vitae, but there is a lengthy list of sexuality resources including links to Go Ask Alice, Out Proud, Alternative Sex, Planned Parenthood, SIECUS, National Coalition of Sexual Freedom, American Civil Liberties Union, National Gay and Lesbian Task Force, Gay and Lesbian Alliance Against Defamation, Human Rights Campaign, The Advocate (homosexual magazine) and two pornographic websites. She also provides links to the websites of numerous “sex educators” including Annie Sprinkle a “feminist stripper” who for a performance “art” piece titled “A Public Cervix Announcement” inserted a speculum into her nether region and invited male and female audience members to view her cervix with a flashlight—which they did.

So, California residents pay the salary of a woman who refers students to Annie Sprinkle’s website. Sheesh.

It would be interesting to learn more about what qualifies Cox to teach collegiate-level courses in human sexuality—well, other than her extensive familiarity with homosexual and pornographic websites.

The Coast Federation of Teachers, AFT Local 1911 took to Facebook to extol the virtues of Cox and criticize the student who recorded her unprofessional whining. The teachers union claims Cox “encourages open discussions on challenging and provocative issues and topics” and “skillfully allows students to respectfully present their varying opinions.” From what I saw, there was no encouragement of an open discussion” regarding the election unless asking Trump-voters to stand in a line-up encourages open discussion.

“Progressives” are usually obsessed with power dynamics, and yet there’s nary a peep from the union about the power differential between Cox and her students. After Cox accuses those who voted for Trump of being terrorists, how comfortable would the alleged “terrorists” be in challenging Cox’s provocative claims when she has the power to pass or fail them?

It’s clear that Cox had no interest in fostering dialogue or critically examining her assumptions. Her goal was to inculcate students with her beliefs using—not reason—but demagoguery.

Let’s take a quick look at the way “progressives” have redefined “safety,” which is inextricably entwined with their redefinition of “identity.”

Safety used to refer to freedom from danger, injury, or serious risk. It did not refer to freedom from exposure to unpleasant ideas, claims, or beliefs—even ideas, claims, or beliefs that criticize  beliefs and feelings that we may place at the center of our identities. Safety does not require that others respect the beliefs and feelings we place at the center of our identities or the life choices that emerge from those beliefs and feelings. To respect something means to hold it in esteem, and no one has an ethical obligation to hold all the beliefs, feelings, or volitional actions of others in esteem.

Accepting the claim of the “self-esteem movement” that irreparable harm will be done to people if their feelings, beliefs, or volitional acts are not affirmed by others has led us to a cultural place where infantilized college students seek succor in nurseries safe spaces replete with puppies and crayons following a bracing encounter with ideas they find offensive.

…Identity when applied to individual persons simply denoted the aggregate of phenomena constituting, associated with, affirmed, and experienced by individuals. Identity was “the set of behavioral and personal characteristics by which an individual is recognizable as a member of a group.”

While Cox clearly cares deeply about the “safety” of the privileged “identity” groups, one wonders if she has any interest in the “safety” of those who find their identity in Christ. The expanded redefinition of “safety” to mean insulation from unpleasant ideas is selectively enforced to apply only to those ideas that make “progressives” uncomfortable—or enraged.