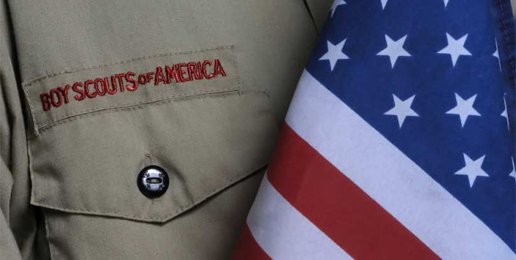 The Boy Scouts of America (BSA) announced Wednesday that it will start admitting girls to its Cub Scouts program, and eventually will create a parallel program that allows older girls to rise to the level of Eagle Scout.

In a statement, the BSA said its decision was in line with its “core values” and was driven by changes in the American family and busy parents desiring a Scouts-like program for their daughters.

“Starting in the 2018 program year, families can choose to sign up their sons and daughters for Cub Scouts,” the statement said. “Existing packs may choose to establish a new girl pack, establish a pack that consists of girl dens and boy dens or remain an all-boy pack. Cub Scout dens will be single-gender — all boys or all girls.”

It continues: “Using the same curriculum as the Boy Scouts program, the organization will also deliver a program for older girls, which will be announced in 2018 and projected to be available in 2019, that will enable them to earn the Eagle Scout rank. This unique approach allows the organization to maintain the integrity of the single gender model while also meeting the needs of today’s families.”

“When you have the Boy Scouts accepting girls (and gender-confused girls who think they’re boys), then the next logical step is for the Girl Scouts to accept boys. What does gender even mean anymore? You might as well join forces and become the ‘Zir Scouts’,” Mefferd told LifeSiteNews.

(“Zir” and “Ze” is a genderless pronoun created by “transgender” activists to replace “her” or “his,” and “he” or “she.” Another variation spells it as “Xir.”)

I am an Eagle Scout

Only boys should be in Boy Scouts

Only girls should be in Girl Scouts

The BSA — whose membership is declining — said its “historic decision comes after years of receiving requests from families and girls, the organization evaluated the results of numerous research efforts, gaining input from current members and leaders, as well as parents and girls who’ve never been involved in Scouting – to understand how to offer families an important additional choice in meeting the character development needs of all their children.”

Randall Stephenson, the BSA’s national board chairman, was effusive about the new girls policy: “The BSA’s record of producing leaders with high character and integrity is amazing,” he said in the BSA release. “I’ve seen nothing that develops leadership skills and discipline like this organization. It is time to make these outstanding leadership development programs available to girls.”

The ATT CEO has presided over some liberal social changes in the Scouts organization that have outraged many former Scouts and pro-family, faith-based advocates like Franklin Graham, who has urged Christians to pull their sons out of the Scouts.

Beginning in 2013, the Boy Scouts moved to end their “morally straight” policy of excluding homosexual boy members, a policy that they had successfully defended in court going all the way to the U.S. Supreme Court in 2000. Then in 2015 the BSA decided to allow to adult homosexual men as leaders, despite the BSA’s history of adult male scoutmasters homosexually molesting boys in their care — the extent of which has still not been revealed to the public.

Earlier this year, the BSA waded into transgender controversies by saying it will allow severely gender-confused, biological girls (who identify as “boys” and want to live as “males”) to become Boy Scouts.

The Scouts’ politically correct moves appear to be taking a toll on membership, as new groups like the Christian-based Trail Life USA have been formed in response to the BSA’s liberal shift, while major church bodies like the Mormon Church have pulled away from the BSA. Perhaps this explains the opening to girls. The New York Post reports on the BSA’s plummeting numbers:

“Current participation in the Boy Scouts, which was founded in 1910, is down from 2.6 million in 2013 and more than 4 million in earlier years. The announcement comes as the organization and other youth service groups have seen dips in membership. The Girl Scouts, meanwhile, reported 1,566,671 youth members as of March, down from just over 2 million in 2014.”

“Just when you thought the Scout leadership could not be any more clueless about the actual purpose of the organization – raising boys to become responsible, masculine men – they come up with this,” said Robert Knight, a senior fellow with the American Civil Rights Union and an Eagle Scout.

“This is organizational vandalism and another sign that the current Scout executives care more about what the clinically insane Left and their media allies think than what is best for boys.  The only good to come out of this will be a further exodus toward Trail Life USA, the genuine heirs to the Boy Scout legacy.”

This article was originally posted at LifeSiteNews.com

Illinois Thinks it is a Better Parent than You