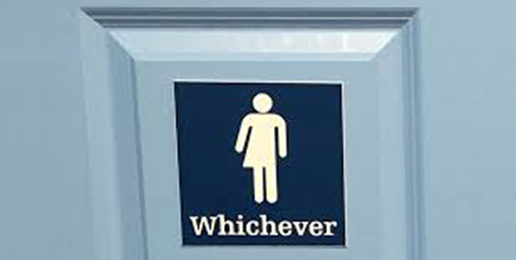 Welcome to life in totalitarian America, where even going to the bathroom and identifying the sex of an adult have now become intensely political acts.

Totalitarianism is about the politicization of everything, and once people’s careers can be destroyed by the New Bathroom Order if they publicly object to the once-bizarre idea of men in the ladies’ room–we’re there. Ask the now-unemployed Curt Schilling.

Totalitarianism is about using force to gain political goals. You can’t get more coercive than forcing the vast majority of people to endorse the utterly bizarre just to accommodate the allegedly hurt feelings of an almost undetectably small percentage of the population. So for the sake of each transgendered person’s hurt feelings, two thousand ordinary folk must be forced to ignore what their eyes and hearts tell them … and be publicly slandered as quasi-racist bigots if they murmur any objection.

Moreover, Americans have already solved the problem: They just politely ignore the fact that public bathrooms are quietly used by transsexuals–both those who look like the other sex and those who really don’t look like the other sex. That decent-minded, live-and-let-live compromise means Americans don’t have to pretend that men are women, and they can call the police if they feel threatened, for example, when a transsexual wants to use a changing room in a school.

But the progressives’ hostility to Americans’ civic compromises was always an element of the gay marriage crusade, as well. It was clear that the amount of coercive force unleashed upon society to make gay marriage work was far, far greater than the coercion necessary to allow civil unions to quietly operate alongside normal marriage. Sure enough, in the blink of an eye, we went from soft-focus “Love Wins” to the nation’s judges’ gaveling out legal threats: “Bake that cake, or lose your entire business.”

As my old colleague Erick Erickson put it, “You Will Be Made to Care” amid an ever-increasing level of coercion, strife, and bitterness. You will now be made to care about men who claim they “identify” as women, while pushing their way past you and into public restrooms that were once the preserve of wives, mothers, girlfriends, and daughters.

It’s going to take a great deal of money, manpower, and regulation to get the New Bathroom Order up and running.

Remodeling public restroom facilities to create more individual, lockable, unisex rooms is one way to reduce the new humiliation, but it would be very expensive.

We’ll probably need some kind of Ministry of the Crapper, where bureaucrats and judges can separate perverts and goofballs and award official-transgender permits to “authentic” transgendered and gender-confused individuals. A great deal of taxpayer money will be spent, and many new rules will be written by many well-paid functionaries. So what’s not to like, for those of a totalitarian bent?

Better still–for the totalitarians–the level of animosity in society will keep growing, as well. A populace stressed out by paranoia and angry accusations of bigotry will be less likely to cooperate, compete, and live in harmony. Instead of local civic cooperation, they’ll resort to government and police when they have to deal with the next dispute that once could be resolved quietly by a healthy civic society. The politicization of everything naturally leads to the enforcement of everything. Debates become bitter because the stakes are higher, and we cannot simply agree to disagree.

Dr. Theodore Dalrymple made this point in a 2005 interview when he described political correctness as “communism writ small.”

“In my study of communist societies, I came to the conclusion that the purpose of communist propaganda was not to persuade or convince, nor to inform, but to humiliate; and therefore, the less it corresponded to reality the better,” Dalrymple said, adding:

When people are forced to remain silent when they are being told the most obvious lies, or even worse when they are forced to repeat the lies themselves, they lose once and for all their sense of probity. To assent to obvious lies is to co-operate with evil, and in some small way to become evil oneself. One’s standing to resist anything is thus eroded, and even destroyed. A society of emasculated liars is easy to control.

Eleven years ahead of the game, Dalrymple provided the perfect description of the ridiculous Bathroom Wars, in which the majority is commanded to open wide and swallow the utterly ludicrous idea of letting men-women barge into women’s restrooms, on the vanishingly small chance that a transgendered individual might not be able to find a suitable private stall. It’s so insane that it caught normal people by surprise; they thought it was a joke, until Bruce Springsteen canceled that concert they bought tickets to.

The real game here is to break the will of those ordinary people so they won’t resist even more social engineering.

It’s like the brilliant Star Trek: The Next Generation episode where Captain Jean-Luc Picard is tortured by an alien interrogator, who says he wants only a simple, trivial concession from his prisoner: He wants Picard to look at a bank of four lights, and say that he sees five.  As Dalrymple warned, and Picard understood, that small concession would break his will and open the floodgates to many others.

Those of more advanced years might remember a similar dynamic at play in Patrick McGoohan’s The Prisoner, where the seemingly trivial concession involved a captive spy explaining why he quit his job–an answer he refused to give, no matter how many bizarre scenarios were constructed to break his will.

We’re all The Prisoner now, which is basically what McGoohan’s show was warning about, decades ago. Instead of killer beach balls, the enforcement system consists of equally faceless, thoughtless, relentless Twitter social-justice flash mobs.

The progressives’ goal is to humiliate and marginalize the majority—to make normal people feel abnormal, to be alone, to be afraid to dissent from what appears to be an overwhelming, media-magnified, Google-approved, Hollywood-polished, Obama-confirmed, irresistible consensus. As any competent military strategist can tell you, numbers count for less than morale. A demoralized majority can be subjugated by an activist minority when it refuses to fight.

That’s why every new social-engineering crusade is framed as an attack on the moral stature of dissenters.

In each case, the dissenter is plainly told up front that he cannot hold his sincere opinion without him also attacking and injuring innocent people. Dissent is dangerous is selfish is criminal. What is the proper name for a political system in which dissent is criminal?

It’s no coincidence the Bathroom Wars are phrased as a struggle over “identity” because identity is the fulcrum of natural order versus totalitarian politics. Certainly, we can all agree that some aspects of our identity are subject to revision–ours to define as we please, although it’s sometimes harder than we bargain for. But some aspects of identity are physical, biological reality.

The totalitarian mindset denies that scientific reality, and insists biology can be overridden by political will–rather like the way totalitarian economic plans assume the laws of supply and demand can be revised by political fiat.

Much of left-wing social engineering is a war between politics and biology, such as the biological truths that children are best raised by their married parents, or that men and women are different. The Left promises to overrule those verdicts of Creation through compulsive force, in a grotesque inversion of the “natural law” ideal, which holds the lightest and most just burden of law flows in accordance with human nature.

Why read academic papers about the Left’s war against identity when you can watch it hilariously demonstrated by the humiliated inmates at a university? Why shouldn’t a white guy of average stature be able to “identify” as a 6’5” Chinese woman?

I can answer that last question: It’s impossible to grapple with difficult questions when your character has been turned to tapioca by liberals, and you lack the courage to reason your way through the most obvious questions.

This has very much been done by design–because it produces a wave of young students and professionals who can be more easily programmed with political assertions that override objective truth.

Backholm’s masquerade as a 6’5” Chinese woman seems like a harmless lark … but if he pushed the issue and really insisted on it, every hour of his life, it would be necessary to use a great deal of compulsive force against the rest of society, to make people ignore the evidence of their own eyes, and to believe his imaginary height, race, and sex.

Most pertinently, you’d have to force normal women, and the men outside who love and protect them, to silently accept his presence in the ladies’ room.

A De-Sexed Society is a De-Humanized Society