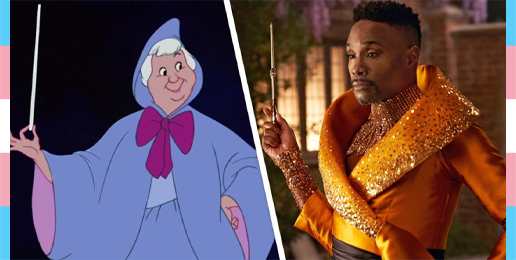 The movie’s writer claims Fab G “transcends mundane human labels,” and, in what passes for profound in Hollywood, Porter proclaims “magic has no gender.” Maybe “magic” has no gender, but humans have a sex. Sexed humans are designed by God for purposes. And families and societies have critical roles in recognizing, affirming, and reinforcing sexual differentiation through “gender stereotypes,” more accurately called sex-based conventions. Sex-based conventions are good and important phenomena that Hollywood, feminists, homosexuals, drag queens, and the “trans”-cult—all of which are spiritually lost—view as evil.

I am a member of a private, non-partisan Facebook group with people of diverse views on many issues but united in our opposition to “invasive, harmful, unproven medical interventions for gender-confused children.” This group includes radical feminists, lesbians, and theologically orthodox Christians. Members are prohibited from expressing either religious or anti-religious views, but there is not a similar prohibition on what may be expressed regarding sex-based societal conventions. What has developed is that feminists and lesbians post a fair number of harsh critiques of “gender stereotypes,” but dissenting views—for example, the view that sex-based conventions, particularly regarding dress, can serve important, good, and necessary functions—are largely absent and would be vociferously condemned by feminists and lesbians.

While I agree society should not have overly restrictive (e.g., that women can’t or shouldn’t be pilots) or inappropriate sex-based conventions, I disagree that all social conventions that reflect and reinforce the good of sexual differentiation are harmful. Quite the contrary. It is a very good thing for societies to acknowledge and reinforce identity with one’s own objective, immutable sex via sex-based conventions.

G.K. Chesterton warns that before we destroy something, we ought to know why it exists. I would argue that sex-based conventions do more than merely help us distinguish males from females. Rather, they reflect, affirm, and reinforce the good of sexual differentiation. Sex-based conventions help children develop a sense of true sexual identity through membership in a sex-based group.

I would argue that the eradication of all sex-based conventions and the concomitant erasure of all taboos against cross-sex-behavior—particularly regarding dress—harm society in multiple ways. Children become confused about their own nature (i.e., ontology) and purpose (i.e., teleology) as males and females. Foundational sexual and familial relationships become disordered. To use Freud’s term, “polymorphous perversity” supplants sexual morality. And the erasure of public recognition of sexual differentiation erodes privacy and safety.

While radical feminists argue that clothing styles are arbitrary, socially constructed, and contribute to the development of cross-sex identification, I would argue that the rejection of sex-based conventions is caused by the prior rejection of one’s sex. Boys and girls reject the styles associated with their sex because they reject their sex. Not the other way around.

In short, it is not good for society or boys for boys to wear tutus, pink lace panties, and lipstick. And it is not good for society or girls for girls to wear men’s swim trunks, boys’ briefs, and buzz cuts. And if swim trunks and boys’ briefs come to be accepted as neither a male nor female convention, women like Ellen Page won’t want to wear them. She wants to wear boys’ clothing because she has rejected her sex. In other words, she—like Bruce Jenner—loves sex-based conventions. She—like Jenner—rejects her sex.

“A woman shall not wear a man’s garment, nor shall a man put on a woman’s cloak, for whoever does these things is an abomination to the Lord your God.”