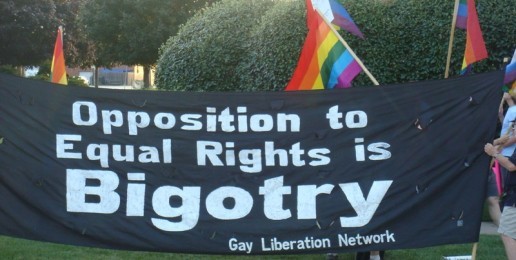 According to the Chicago Tribune and ABC7Chicago, this past Sunday — Valentine’s Day — a handful of homosexual activists gathered in front of Holy Name Cathedral to protest biblical morality and harass those attending Sunday Mass. Specifically, these protesters object to the Catholic Church’s position on homosexual so-called “marriage” calling it “homophobia” and “bigotry.” (Unfortunately, the ABC story failed to give an opposing view.)

The picket took place on what homosexual activist called “Freedom to Marry Day.” (The “gay” lobby is appropriating Valentine’s Day to promote homosexual “marriage,” holding similar annual events across the country.) The Chicago protest was sponsored by the extremists at Chicago’s Gay Liberation Network (GLN).

Back in 2005, the GLN targeted Chicago’s historic Moody Church because Pastor Erwin Lutzer wrote and published a book titled “The Truth About Same-Sex Marriage,” which lays out the dangers of homosexual “marriage” and urges Christians to get involved in stopping it. In his book, Pastor Lutzer correctly identifies the danger of homosexual unions as “the most damaging social experiment to ever be attempted in this country… If God’s people do not act now, it might be too late.”

Lutzer’s book makes clear that Christians should oppose all sexual sins — not just homosexuality — while compassionately offering the hope of the Gospel to anyone caught up in sexual sin.

A similar pro-gay story was aired on Chicago’s CBS News Channel 2 in which gay lobbyist Rick Garcia castigates Chicago’s Catholic leader, saying “The Cardinal should be ashamed of himself. It’s my Catholic faith and my Catholic tradition, which I love dearly, and no bishop can take that away from me, not now, not in the future, not ever.” (Unfortunately, CBS failed to present an opposing view.)

The reality is Rick Garcia and the GLN protestors cannot tolerate the mere thought of any moral authority, let alone one that holds to a belief in sexual depravity. Their chants of “homophobe,” “bigot” and “hate monger” are not just attempts to intimidate and silence opponents — which they are — but they are part of a larger effort to frame the debate to normalize homosexual behavior and establish it as a civil right in the minds of Americans. The media is a willing ally in assisting to propagate this message.

Repeating these lies often enough has been successful in persuading people into believing that the so-called “gay” community is being victimized, being denied civil rights and are in need of special legal protections. Too many faithful Catholics and Protestants have succumbed to this message and its political agenda. As a result, the homosexual lobby continues to boldly push for special laws and policies to compel the American public to accept unnatural sexual practices, regardless of their religious beliefs.

The noisy protests in front of Holy Name Cathedral and Rick Garcia’s public statements to Channel 2 prove that homosexual activists and their supporters want to dictate doctrine for the church, but first they must demonize religious leaders and religious bodies that stand up for biblical sexual morality as “bigots.”

This Sunday’s protest is more evidence that homosexual activists will not rest until the church and Bible-believing Christians are silent on the issue of homosexuality. We must continue to oppose this radical social and political agenda and teach our children and our grandchildren the truth or run the risk of forever losing our right to proclaim it.