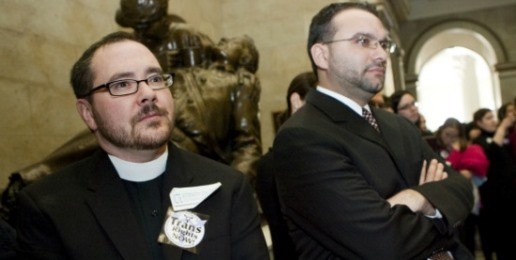 Anglican Church ladies used to be stout matrons in tweed suits and sensible shoes. Manning the tea urn, setting up tables for the church bazaar and knocking some sense into the vicar, they were a formidable (if not monstrous) regiment of women.

The Anglican ladies are all being ordained and this article from the Daily Telegraph informs us of the new clergy fashions. Clerical shirts go floral!

Mind you the Anglican ladies of a different sort have been fond of lace, brocades and floral designs from the William Morris studio for a long time.

While we’re on the subject of Anglican ladies, it seems that some of the lady clergy don’t want to be ladies.

Rev. Cameron Partridge used to be a girl, but now he’s a guy and he’s an Anglican clergy person too. In fact, when interviewed he wasn’t too happy about being either a man or a woman. He says his sexuality “is not binary”. Well, you see Cameron was once called something else which was a girl’s name, but he’s not telling what it was because he-she-it is not into before and after photos.

Cameron then got hitched up with her-his-it’s girlfriend and was lesbian for a while, but then he-she-it decided to become a male-female-it. Anyway, Cameron is going to preach at Washington’s National Cathedral when they celebrate a whole week of Lesbian-Gay-Transgendered-Bisexual-Queer ness. Bishop Vickie Gene Robinson will be there too, but he-she-it won’t be with his-her-it’s former husband because he-she-it divorced him-her-it.

For several years now there has been an effort in trans studies to complicate the before-after narrative frame. A great, accessible example is a film by Jules Rosskam called “against a trans narrative.”

I agree with these critiques that “before-after” narratives can have a way of boxing people in. Plenty of trans people don’t medically transition, and those who do transition do so in various ways — they may or may not identify as simply male or female. So “before-after” questions can sometime feel invasive for that reason — because they may unwittingly carry assumptions about how binary or not binary our identities may be.

But most of all I appreciate what’s called “Anglican comprehensiveness,” which often calls us to embody ambiguity. Sometimes that causes us discomfort, even conflict, but it’s at the heart of who we are as Anglicans. I love that.

Pope Francis said the church should never cease to surprise.

I don’t think this is what he had in mind.

This article was originally posted at the Patheos.com blog.