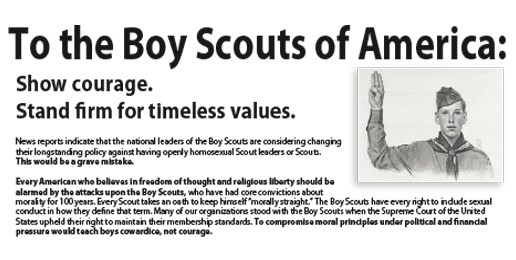 In a full page ad today in USA Today, Family Research Council and 41 other organizations, including the Illinois Family Institute, urged the Boy Scouts to keep their moral values.

Click HERE to see the ad.  Below is FRC’s press release.

WASHINGTON, D.C. – Family Research Council (FRC) and 41 allied organizations ran an ad today in USA Today urging the Boy Scouts of America (BSA) to stay true to their timeless values and not surrender to financial or political pressures by corporate elites on the issue of homosexuality. BSA is considering changing its long-standing policy prohibiting openly homosexual members and leaders.

The organization decided last July, following a two-year study, and because of the opinions of a “vast majority of parents” of Boy Scout members, that the policy would not be changed. BSA has since reconsidered and will release their decision about the policy on Wednesday.

The ad states that a policy change would be “a grave mistake” and that, “Every American who believes in freedom of thought and religious liberty should be alarmed by the attacks upon the Boy Scouts,” whose oath includes that members should be “morally straight.” The ad emphasizes that, “To compromise moral principles under political and financial pressure would teach the boys cowardice, not courage.”

The ad highlights BSA’s policy of recognizing the right of parents to teach their children about sexual topics. The ad concludes by challenging readers to ask themselves, “How will parents be able to entrust their children to the Boy Scouts if they trade the well-being of the boys for corporate dollars?”