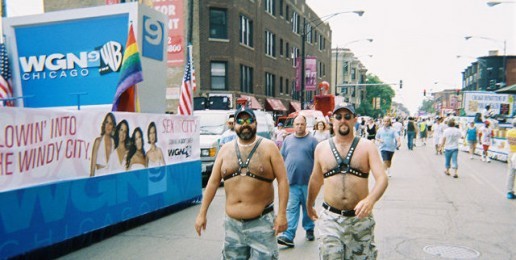 Chicago parades include the famous St. Patrick’s Day Parade in March, where the Chicago River is tinted green in honor of the Irish. The Polish American Constitution Day Parade, held May 1st, celebrates the first European democratic Constitution established in Poland in 1791. The Bud Billiken parade on the City’s southside is the City’s largest “back to school” celebration. The Columbus Day Parade, held in Autumn, is another ethnic celebration featuring the contributions of Italian Americans. Thousands of Chicagoans participate in these parades and support the causes they represent.

However, never within the celebration of these events would you find the flagrant and offensive violations of the Public Morals Laws of conduct as you do in what has become known as the annual Chicago Gay Pride Parade, which was held this year on Sunday, June 28th.

This lack of enforcement, it could be argued, amounts to special protection for this group of citizens who flaunt decency laws with impunity. (Doesn’t our U.S. Constitution require “equal protection” under the law?)

Aside from the celebration of perverse sexual behavior and the blatant disregard for the laws, the most disturbing aspect of this yearly event is the presence of children, both as participants and bystanders.

In the past, adults have attempted to shield children from accidental exposure to immoral behavior; things their minds are too young to comprehend. State and federal laws are in place for that purpose. Protecting their innocence was always a goal worth achieving. But now adults are purposely bringing children to witness degenerate conduct. What will it take for Chicago officials to pull the plug?

And no one could reasonably argue that Chicago’s media isn’t biased toward the homosexual agenda — especially once you see their floats and major personlities proudly placed in the homosexual parade (ABC-7, CBS-2, NBC-5, and WGN); they’ve obviously given up on the idea of neutrality when it comes to issues as important as homosexuality, the meaning of family and marriage, and traditional religion! Year after year, these media participants see the violations first hand, yet they repeatedly turn a blind eye to the outrageous behavior and displays of many of the parade partakers.

While the devisive issue of homosexuality and counterfeit marriage is debated throughout the nation, the media has thrown off the mantle of impartiality, and have, in turn, become fierce advocates.

Then we have corporate America’s complicity. Jewel/Osco, Harris Bank, Public Television – WTTW, Whole Foods, Starbucks, Home Depot, to name a few. (See a complete list below). Alan Sears and Craig Osten, authors of The Homosexual Agenda, give us some great insight on this issue:

Why has corporate America been such an easy target for homosexual activists to push their agenda? One of the main reasons is that the homosexual community has a much higher level of disposable income than most families, and therefore in order to tap that market, many corporations have gone overboard in their willingness to bow to the demands of radical homosexual activists. In addition, homosexual activists, with the aid of the media, have become so adept at demonizing any corporation that does not give in to their agenda that most companies quietly cower at their feet rather than face the public relations wrath of the activists.

Yet, this is no excuse for corporate and civic irresponsiblity. It is important to note those businesses who unwittingly undermine the health and values of our culture and families; we must communicate to them our strong disagreements with the agenda of homosexual extremists.

Here is the list of those participating in the 2009 Gay Pride Parade: