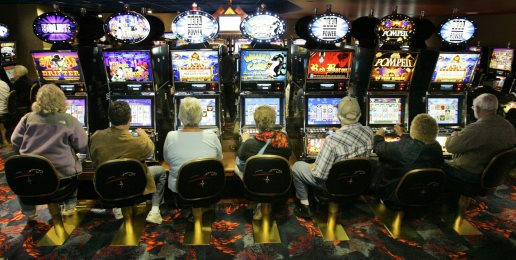 In 1974, the Illinois Lottery was established with the goal of funding K-12 public education.  In 1990, the Riverboat Gambling Act legalized ten casino licenses throughout the state.

In 2009, another massive gambling expansion was passed, allowing video slot machines in neighborhood bars, restaurants, fraternal organizations, veterans groups and truck stops. This resulted in 18,000 slot machines at more than 4,700 locations, which is the equivalent of adding 15 new casinos. Twice as many locations for legalized gambling as Nevada.

Illinois citizens have lost more than $725 million at these slots since 2012!

If gambling expansion were a magical solution, the explosion of gambling in Illinois should have solved most of our state’s financial troubles by now. Yet, the state of Illinois has a $52 million budget deficit, and an “unfunded pension liability” of at least $100 billion.  In addition to that, Illinois has 300,000 fewer people working today compared to January 2008 and food stamp recipients have increased to over a million.

Gambling is not the financial answer to the unrestrained spending of state lawmakers, but rather has served to greatly aggravate Illinois’ fiscal woes by injecting a predatory vice into communities across the state.

We know the social harms that accompany gambling are enormous: debt, depression, foreclosure, bankruptcy, divorce and even suicide.  Researchers believe that crimes committed by compulsive gamblers are often underreported. Some of these crimes include writing bad checks, check forgery, fraud, and embezzlement.

The National Institute of Justice reported that 30 percent of pathological gamblers who were arrested in Las Vegas and Des Moines admitted that they had committed a robbery, and about 13 percent of them admitted they had assaulted someone to get money.

Economics professor, Earl Grinols, says in his book, Gambling in America: Costs and Benefits, the annual cost of one addicted gambler to society is $10,330. Grinols argues that the costs of casino-derived revenues exceed the benefits by a factor of more than 3 to 1.

It is painfully clear, gambling is not and has not been the answer to the state’s fiscal problems.  While it may be a source of amusement for some, for far too many families it has been a source of pain and suffering.

TAKE ACTION: Click HERE to contact your state representative and state senator and ask them to vote against any new proposals to expand gambling in Illinois.