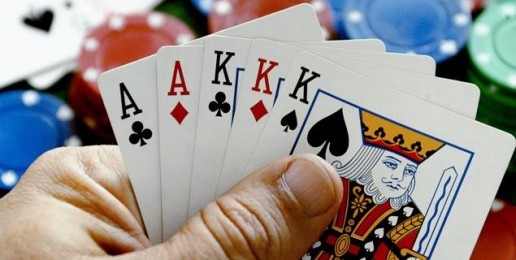 Before 2005, Sandra Adell had never set foot in a casino. But when a friend of the then 59-year-old professor at the University of Wisconsin—Madison asked Adell to accompany her to the Ho-Chunk casino about 45 minutes away from her home, she obliged. As Adell walked through the casino floor, she thought to herself, “Why in the world are all these people here?” She sat down at a machine, and by the time she got up, she was hooked.

“I thought that the casino had become my personal ATM,” says Adell, author of “Confessions of a Slot Machine Queen.” Early winnings convinced her the casino was where she belonged. She quickly distanced herself from her social circle, foregoing meals with friends and family to spend time gambling. “All I wanted to do was play the slots,” she says; it was all she could think about.

Gambling addiction can grab hold of people and morph them into someone who only cares about their next bet. According to the National Council on Problem Gambling, an estimated 2 million adults in the United States meet the criteria for “pathological gambling,” and 4 to 6 million are considered “problem gamblers.” It’s an addiction found across economic classes, from lower-class Americans playing for their next paycheck to those wealthy enough to gamble away tens of thousands of dollars within a few hours.

Men vs. women. Contrary to popular belief, the gap between the number of male and female gambling addicts is closing. As more Indian and local casinos with slot machines are added to the playing field, the number of female problem gamblers increases throughout the country, says Sam Skolnik, author of “High Stakes: The Rising Cost of America’s Gambling Addiction.”

However, Skolnik says betting behaviors vary by gender. He says men are more likely to be “action gamblers,” meaning they prefer games that involve skill (e.g., poker or blackjack), while women tend to be “escape gamblers,” meaning they’re more drawn to machines that are based on luck (e.g., slots or bingo) and gamble to distract themselves from problems in their personal life.

Studies show female compulsive gamblers frequently report feeling “hypnotized” when playing a slot machine. Many men, meanwhile, describe sports betting as a way to use their knowledge for monetary gain. Despite such differences, there are a number of biological similarities. While gambling, men and women both experience spikes in dopamine, the neurotransmitter for pleasure.

Some people liken compulsive gambling to alcohol or drug addiction, and studies conclude the same parts of the brain are activated during the “high.” “A gambler who is about to make a bet, and a cocaine addict who is about to take a hit of cocaine, experience similar brain patterns,” Skolnik says.

As with alcoholism, a gambling addict can develop tolerance, says Keith Whyte, executive director of the National Counsel on Problem Gambling. Whyte says the more people gamble, the more they need to bet to achieve the same level of excitement and ecstasy. Only Whyte says, “There’s not enough money in the world to overdose on problem gambling.” And just like those addicted to a substance, many problem gamblers will take extreme measures to finance their addiction.

Doing whatever it takes. Timothy Fong, professor of psychiatry at the University of California—Los Angeles and co-director of the school’s gambling addiction program, says about a quarter of gambling addicts will commit a crime to satisfy their cravings, including embezzlement, insurance fraud or identity theft. Some, he says, even turn to prostitution. “Gambling for normal people is about entertainment, but for gambling addicts, it’s about survival,” according to Fong. “These people aren’t at the casino to have fun. They’re there to win big—and they won’t let a loss stop them from gambling.”

In fact, hitting a jackpot can lead gambling addicts to raise their bet because it tricks some into thinking they need to capitalize on a hot streak, says Marc Lefkowitz, a California-certified gambling counselor and recovered gambling addict. “You may be winning at some point in the night, and that gives you a high, but the high doesn’t last,” he says. Lefkowitz says those who are in deep also often think irrationally. “They think, ‘This cold streak has to end sometime,” says Lefkowitz. “However, the odds are still the same. They’re always in favor of the house.”

Experts call this the “gambler’s fallacy,” meaning many gambling addicts assume a long-term slump will be corrected in the short term by a big win. Many times, this false belief is connected to “chasing,” a practice by which compulsive gamblers see the casino as having stolen their money and they will do whatever it takes to get it back.

Today, chasing is made easier for a number of Americans due to the rapid expansion of gambling. Recently, several states along the East Coast legalized table games, such as blackjack and poker, in what politicians say is an effort to increase employment opportunities and help fund schools. Maryland, for example, was losing approximately $550 million to neighboring states before passing legislation last year to allow table games in casinos. Some state governments are also pushing for legalization of online gambling. New Jersey Gov. Chris Christie has already signed a bill permitting casinos in Atlantic City to host websites that take bets on games such as blackjack, slots and poker. Delaware and Nevada have also passed laws legalizing Internet betting.

Lefkowitz, however, thinks online gambling poses a serious threat since it makes gambling available 24/7, from one’s house, and takes away the human judgment factor. “If people are gambling on the Internet, they don’t have to look anyone in the eye if they were to lose a grand in a minute,” he says.

The “dark side” of gambling legislation. Notwithstanding benefits for education and employment, gambling’s proliferation will inherently spread the addiction—at rates some experts predict will devastate millions of Americans. “All this government backing makes gambling sound harmless,” says Fong, “but there is a dark side that many state governments are downplaying.”

When politicians champion gambling legalization, Skolnik says citizens don’t typically hear about the programs that will need to be created to offer education and treatment for gambling addiction. “Some states are setting aside money for these programs. By laying out these programs, in essence, they’re conceding they’re creating new groups of addicts in their community,” Skolnik says.

Moreover, some experts say treatment centers can only do so much, since a fraction of gambling addicts seek help. Fong says treatment is typically effective, but he believes there can be more shame associated with admitting a gambling addiction than coming to terms with a drug or alcohol addiction. “I think, for a lot of people, there’s something more disgracing about losing your money while sober than you spending it on drugs,” he says.

Additionally, unlike a substance addiction, no physical signs point to a gambling problem. As a result, some refer to problem gambling as a “silent addiction” because it’s easy to hide. “You can’t smell blackjack on somebody’s breath,” says gambling counselor Lefkowitz. Sometimes, people don’t learn their spouse has a gambling addiction until their car is repossessed or their house is in foreclosure.

According to Jon Grant, professor of psychiatry at the University of Minnesota, which houses a clinic for impulsive disorders, there are only a few visible signs of a gambling addiction, namely fatigue due to loss of sleep or irritability—two symptoms that can signal a number of other illnesses.

For people like Sandra Adell, though, their addiction surfaces when pushed to their limit. Adell’s gambling inflamed her drinking and turned her into an alcoholic who couldn’t leave her seat at the slot machine. One night, in May 2006, Adell drunkenly stumbled out of the casino and fell on the floor of the parking lot by her car. The security guards found her on the ground, her head bruised, lying next to a wad of cash she had dropped. That night—seeing her alcohol and gambling addictions collide—caused Adell to admit she had a problem: “I was losing my money, my self-respect—everything that I had built and saved for retirement, I was about to lose it all, and I couldn’t stop myself.”

On the mend. After going to rehab for alcoholism and undergoing outpatient treatment and private therapy for gambling, Adell reclaimed not only her health but her sense of self-worth. “My addictions were a deadly combination,” she says. “Over time, though, I learned how to take control of my life.”

To prevent relapse, Adell takes measures to keep her mind off gambling. While driving in some parts of town, she shuts the radio off so she doesn’t hear ads for nearby casinos. She flips the channel if a casino’s commercial pops up on the TV. She also takes to outdoor activities, like hiking, instead of seeking comfort at a slot machine.

Other former gambling addicts rely on family to help keep their demons at bay. For example, their spouse may only let them use cash and require they provide receipts for all purchases. Unfortunately, as Whyte points out, this strategy has limits. “Restricting access to money is a crude way to prevent relapse, but it’s not perfect,” he says. “You can gamble with credit, and many gambling addicts can get a credit card without their spouse knowing about it.”

Avoiding setbacks. Compulsive gambling can take a toll on one’s finances and emotions. And like any addiction, those who’ve kicked problem gambling must monitor their behavior to keep their thoughts and behaviors in check. Otherwise, they may end up like Thomas Koch.

After gambling away close to $2.5 million of a client’s money, the 46-year-old lawyer from Greenfield, Wis., said at his own sentencing playing the slots was like “the greatest drug there ever was.”