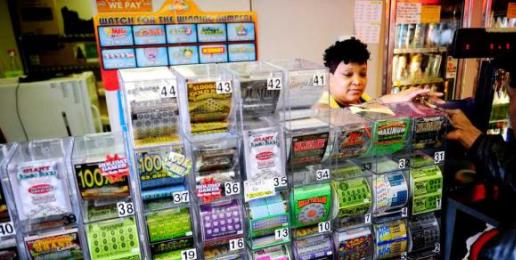 The Chicago Tribune reported this last Friday on the dubious goings on at the Illinois Lottery:

A Tribune investigation found the Illinois Lottery collected hundreds of millions of dollars from selling tickets to instant games in which it did not hand out all of the life-changing grand prizes — sometimes awarding no grand prizes before ending a game.

Are you shocked, shocked that corruption is going on at the Illinois Lottery? Well, you shouldn’t be. Corruption, inefficiency, and lack of oversight affect virtually every government agency in Illinois.

Poor management of tax dollars have left Illinoisans with billions in unpaid bills and well over a hundred billion dollars in unfunded liabilities despite record tax receipts to the state of Illinois. Some on the political right call for more privatization of public services. Unfortunately, that won’t improve services if  the oversight of those programs by the state is as lousy as its oversight of its own bureaucracies.

Case in point — the Illinois Lottery:

Illinois became the first state in the nation to turn over day-to-day management of its lottery to a private firm. The firm, Northstar Lottery Group, took over the Illinois Lottery in July 2011. Since then, Northstar has been criticized for failing to deliver the profits to the state it projected when it won the Illinois bid. The state is now looking for a replacement.

The focus of the Tribune’s investigative report was “how private management affected players,” about  which, the Trib notes, “there has been little talk.”

No big surprise there. That would have required oversight by our state’s elected officials. If our governor and General Assembly members would have done their jobs, they would have discovered things like the Chicago Tribune found:

It was called The Good Life and offered the biggest grand prize of any instant game the Illinois Lottery had ever produced.

Two lucky winners could scratch their way to $46 million each, paid in periodic installments. At $30, tickets weren’t cheap, but millions were sold. Then the game ended before the lottery sold most of the tickets that were printed, with neither top prize awarded.

And with another version of The Good Life. Three large grand prizes offered. None awarded.

Seems like kind of a big thing to have missed by those who have the responsibility to run our state government honestly and effectively. The Illinois Family Institute finds itself on the opposite side of the Tribune editorial board on many issues, but in this case, the Trib deserves kudos for this report.

Even if the state had done it’s oversight job well, however, the Illinois Lottery is still a lose-lose for families and taxpayers. The Illinois Family Institute has been clear in its opposition to legalized gambling of all kinds, and you can learn more about the issue in our archives by clicking here.

Legalized gambling is a moral issue that, as so many moral issues do, involves tax dollars. A lot of tax dollars. Astonishing debt, abortion-funding, and punishing taxation-levels are not only fiscally foolish but also immoral. Decades of economic and social science research have demonstrated the ill-effects of private and government-run legalized gambling.

Economics professors Earl L. Grinols at Baylor University and David B. Mustard of the University of Georgia, have long studied the issue. They agree that to adequately count the costs of legalized gambling, several categories of various costs must be factored in. Their list includes: crime, business and employment costs, bankruptcies, suicides, illnesses, social service costs, government regulatory costs, family costs, and abused dollars (a term representing monies acquired under false pretenses to fund a gambling problem).

The math doesn’t quite work out the way proponents of gambling would have you believe. Society and the economy pay a heavy price for such “economic activity.”

Take ACTION:  Click HERE to send your state lawmakers an email to express your outrage at the way the Illinois Lottery is allowed to run. Ask your state representative and state senator about their oversight of this agency and the lack of responsible management in general. You may even want to encourage them to abandon problematic revenue schemes like the lottery, which take advantage of the poor and under-educated.

Lotteries: The Issue (Focus on the Family)

In addition to these IFI archive of articles, more articles on the topic can be found here.

The Illinois Family Institute is completely dependent on the voluntary contributions of individuals just like you.

Please consider supporting our work to stand boldly in the public square.