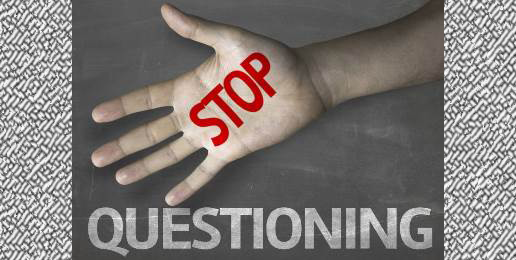 Why Christians Should Oppose Calls to Punish ‘Climate Skeptics’
05.07.16
PRINT

Since human nature hasn’t changed, it should come as no surprise that, even in our supposedly enlightened age, some people still want to use force, masquerading as law, to end debate.

It started with people just voicing their opinions that “climate skeptics,” or “climate deniers” (both deceptive caricatures) should be punished somehow. A few examples?

In 2006, the eco-magazine Grist called for Nuremberg-style trials for skeptics. In 2008, NASA scientist James Hansen called for trials of skeptics for “high crimes against humanity,” and Obama advisor Joe Romm warned that climate skeptics would be strangled in bed.

In 2009,  the left-wing website Talking Points Memo provocatively asked, “At what point do we jail or execute global warming deniers?” and Robert F. Kennedy Jr. called coal companies “criminal enterprises” whose CEOs “should be in jail … for all of eternity.”

Since then similar calls have surfaced repeatedly, but those who made them had no means to carry out their wishes.

More recently, things have become more serious. Fundamental liberties of free speech and free press, guaranteed by the First Amendment, are in jeopardy.

Writing in The Washington Post he said corporations that support “the climate denial network” should face prosecution under RICO— the Racketeer Influenced and Corrupt Organizations Act (which Congress designed to target organized crime!).

In September, a group of 20 warmist scientists, apparently prompted by Whitehouse, wrote to President Barack Obama, Attorney General Loretta Lynch, and Obama’s chief science advisor, John Holdren, calling for “a RICO … investigation of corporations and other organizations that have knowingly deceived the American people about the risks of climate change.”

(Ironically, the group’s leader, Jagadish Shukla, then came under investigation for abuse of millions of dollars in government grants to his non-profit organization!) When World magazine quoted me calling the Shukla 20’s letter a “direct attack on the rights to freedom of speech and the press guaranteed by the First Amendment” and “horrifically bad for science,” Whitehouse responded angrily, naming me personally, on the Senate floor.

True, but the legal definition of fraud is “intentional misrepresentation of material existing fact made by one person to another with knowledge of its falsity and for the purpose of inducing the other person to act, and upon which the other person relies with resulting injury or damage.”

The problem with Whitehouse’s call is that with the enormous range of opinions among scholars about:

With all the legitimate scientific controversy over all those questions, proving that anyone who holds any particular position …

… would be next to impossible, and at the rate at which climate is changing would take decades or centuries to determine because damage specifically traceable to human action, if it did occur, rather than natural factors won’t be clear for that long, if ever.

Comparing “climate skeptics” with defenders of the tobacco industry is patently absurd. The connection between tobacco smoking and cancer is infinitely simpler and more straightforward than that between CO2 emissions and (not simply global warming but) dangerous, man-made global warming.

Earth’s climate system is one of the most complex natural systems ever studied. It consists of thousands of subsystems — feedback mechanisms — most of which we still don’t understand. We don’t know how strong they are or in some cases even whether they increase or decrease warming or the balance of benefits and harms from it.

Providing energy to everyone is one of the most complex activities ever undertaken. The cost of reducing fossil fuel use — which now delivers about 85% of all energy in the world — is scores of trillions of dollars that could be used otherwise with far more benefit.

In the face of all the scientific and economic uncertainties, to prove that someone has (1) intentionally misrepresented an established fact, (2) knowing its falsity, (3) to induce others to act, (3) with the result that others do act and (4) are injured because of their acts, would, as I said, be almost impossible.

The only path to conviction would be for governments to judge which of the thousands of scholars were right, and which wrong, on hundreds of contested points.

In other words, our government would need a “Ministry of Truth” like that warned of in George Orwell’s 1984.

That is why I stand by my opinion that what Whitehouse and the Shukla 20 demand is a direct threat to First Amendment freedoms.

One, the AG for the U.S. Virgin Islands, has subpoenaed ExxonMobil and the Competitive Enterprise Institute, a CAGW-skeptic think tank, for over a decade’s worth of records.

The evidence is overwhelming that “AGs United for Clean Power” are clearly motivated not by concern for law but by partisan politics.

Their name incorporates part of the name of Obama’s legacy environmental regulation, the EPA’s “Clean Power Plan.” Al Gore, one of the world’s most outspoken climate alarmists, stood with them at their initial press conference. There’s not a single Republican among them.

And while they threaten fossil fuel corporations and organizations that question CAGW, they ignore renewable power companies that, despite federal subsidies of billions of dollars, have, like Solyndra, gone bankrupt, or, like SunEdison, are on the verge.

In short, the “AGs United for Clean Power” are abusing their legal powers to pursue a political agenda.

A Conspiracy to Deprive Citizens of their Rights?

If two or more persons conspire to injure, oppress, threaten, or intimidate any person … in the free exercise or enjoyment of any right or privilege secured to him by the Constitution or laws of the United States, or because of his having so exercised the same; … They shall be fined under this title or imprisoned not more than ten years, or both ….

University of Tennessee law professor Glenn Harlan Reynolds wrote of that in USA Today shortly after “AGs United for Clean Power” announced their intentions. But since U.S. Attorney General Loretta Lynch, an Obama appointee, has announced her desire to investigate and prosecute climate skeptics, they aren’t likely to be held to account.

If they aren’t, they can wreak havoc on any person or organization that has voiced skepticism about CAGW. Even if they could never get a conviction, they could ruin their targets financially with legal and court costs.

Even if they never file indictments, the very threat has a chilling effect, and that’s dangerous — dangerous most importantly to our God-given rights to freedom of speech and press, yes, but also to the integrity of science.

That’s because science absolutely depends on free, wide-open, robust debate to progressively reduce error and replace it with truth. The appeal to “scientific consensus” to justify claims of CAGW and silencing skeptics is anti-scientific, because consensus is a political value, not a scientific one.

In short, science is the systematic process of testing all things and holding fast what is good — exactly what God commands us to do in 1 Thessalonians 5:21 — and you can’t do that if “all things” can’t be voiced.

So free inquiry and free speech are indispensable to good science.

Christian Faith and Freedom of Speech, Press, and Scientific Debate

They’re also implicit in the Christian faith because they are implied by the image of God in man. That image makes reason possible, and reason makes free choice possible.

When two billiard balls meet on a table, they don’t stop and discuss which will go where at what speed. They exchange energy and, by sheer force without reasoning, ricochet in their respective directions. But people, because we’re made in God’s image, have the capacity of rational choice.

That’s why, over the centuries, as Christians came to understand better and better the implications of their Biblical worldview and its doctrines of God, humanity, and sin, they became advocates of liberty — including freedom of speech, press and inquiry.

That’s why one of the earliest and most important defenses of intellectual freedom was by the Puritan poet John Milton (better known for Paradise Lost). His book Areopagitica, named for the Areopagus, the hill in Athens on which Paul debated over Christ’s resurrection.

The appeal to force to silence opponents in debates is consistent with an atheistic, materialist worldview, the one increasingly dominant among American progressives/liberals, but it’s utterly contrary to the Biblical worldview.

And indeed, because some people never tire of using force to silence truth, prison is a familiar place to God’s servants. Indeed, our word “martyr” comes from the Greek for “witness”: martus. And it’s not only for testifying of Christ that people suffer — they suffer for standing for many truths.

And before his conversion Paul imprisoned many Christians for their faith (Acts 8). Later, as an apostle, he spent years imprisoned in Philippi (Acts 16), Jerusalem (Acts 22), Caesarea (Acts 24), and throughout a long land and sea journey ending in Rome (Acts 27–28).

As Hebrews 11 says of heroes of the faith:

Some were tortured, refusing to accept release, so that they might rise again to a better life. Others suffered mocking and flogging, and even chains and imprisonment. They were stoned, they were sawn in two, they were killed with the sword. They went about in skins of sheep and goats, destitute, afflicted, mistreated — of whom the world was not worthy …. (Hebrews 11:35–38)

So Christians must not roll over and play dead in the face of bullies like “AGs United for Clean Power.” Instead, we must stand up to them, insist on our God-given and Constitution-guaranteed rights, and avail ourselves — as the Apostle Paul did (Acts 25:11) — when those rights are threatened.

Calvin Beisner, Ph.D., is Founder and National Spokesman of The Cornwall Alliance for the Stewardship of Creation, and a former Associate Professor of Historical Theology and Social Ethics at Knox Theological Seminary (2000–2008) and of Interdisciplinary Studies at Covenant College (1992–2000).

This article was originally posted at the Stream.org website.

Combating the Politics of Fear
b
a
x
r