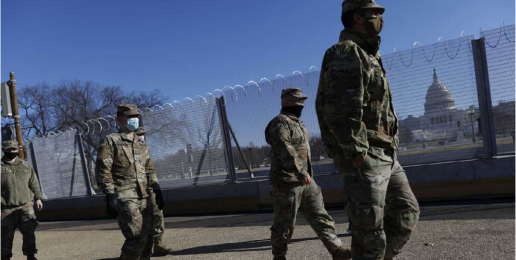 All those Anti-Trump Christians who either did not vote for the oft-unpleasant Trump or, worse, voted for befuddled Biden and his puppeteers now bear some culpability for ceding more control to those whose lust for power far exceeds their compassion for the weak or love of freedom. After leftists’ Russian-collusion disinformation ruse failed, they floundered about until the Chinese Communists came to their rescue. An ocean of blood has been and will be spilled at the hands of leftists, and all who played a part in facilitating their acquisition of more power bear a measure of guilt.

In the midst of the Wuhan crisis, the rage of the fatherless and improperly tutored made our streets and businesses abominable infernos unfit for civilized humans for months. The left cheered and paid for the criminals’ freedom, thereby normalizing lawlessness. When, in a far less destructive or deadly riot, the Capitol was besieged by a crowd imitating the lawlessness they saw celebrated for months, the left marshalled a military response that would make Stalin, Chairman Mao, Kim Jung Un, and Xi Jinping proud.

Throughout “campaign” season, the daft old man shuffling between his cellar and the nearest Dairy Queen was left unmolested by the thoroughly corrupt press who would have made mincemeat out of any Republican candidate who so resembles Grampa Simpson. No hard questions about Biden’s plans for America, no inquisitorial questions about his crime syndicate family, no questions at all about his questionable mental agility.

Over the past five years, our thoroughly corrupt press has exposed exactly how committed to inclusivity they are.  The all-inclusive leftist press that licks the sneakers of Kamala Harris because she’s the first semi-black, female (whatever that is) vice president, and continues to drool over the sartorial style of Michelle Obama, shunned Melania Trump, the most beautiful First Lady in America’s history, who is also an immigrant and polyglot with a fashion sense surpassing Michelle Obama’s. The press revealed that leftist inclusivity and love of diversity looks remarkably like mean-spirited, petty, non-inclusive, middle-school-girl bullying.

And now the bloodletting and oppression are really gaining steam—thanks in no small part to anti-Trump Christians.

In a flurry of Executive Orders so furious that even the New York Times said, slow down, old man, Biden has increased funding for Calculated Carnage Planned Parenthood, and released U.S. taxpayer money to fund human slaughter all around the world. Yes, leftists seek the destruction of babies of color everywhere, and they get special pleasure from making you, Americans, fund it.

But remember, anti-Trump Christians insisted self-righteously that ensuring Trump’s loss would enhance the image of Christianity among the God-hating. Sure, sure, Trump’s administration did do more to protect the unborn than any administration since 1973, but getting Biden elected would do far more to make God-hating, baby-killing leftists think Christians aren’t so bad after all—or so anti-Trumpers insist. Never mind, that Jesus told his followers the world would hate them because it hated him first. Anti-Trump tub-thumpers know better.

In the name of unity, creepy Biden wants to unify boys and girls in college dorm room assignments. He wants to unify naked boys and girls in locker rooms. He wants young men with all their male “equipment” intact to be set loose in the showers and barracks of young women who have volunteered to serve our country. And what Biden wants, Biden gets with the stroke of a pen.

An Army training manual created in the wake of Obama’s efforts to unify males and females in military barracks and showers includes this:

[F]ollowing her [sic]transition from male to female (which did not include sex reassignment surgery) …  a transgender Soldier begins using female barracks, bathroom and shower facilities. Because she [sic]did not undergo a surgical change, the Soldier still has male genitalia. [Female] Soldiers must accept living and working conditions that are often austere, primitive, and characterized by little or no privacy.

I guess we should be thankful that leftists still recognize that forcing young women to shower in the presence of male peers is “primitive.”

The Trump administration began unraveling Obama’s obscene, science-denying offenses against women. Biden is reinstating them. Maybe anti-Trumpers can explain how their complicity in the sexual integration of the private spaces of girls and women enhances their Christian witness.

Brassy AOC and brittle Nancy Pelosi have accused Congressional colleagues of attempted murder without being censured. AOC has urged the creation of a blacklist to track Trump-supporters and keep them unemployed. Other Democrats have urged the creation of another spy agency to be used specifically for targeting “domestic terrorists.” Sounds benign, maybe even good, until you remember that Big Brother’s Ministry of Truthiness redefines everything. Division is unity, men are women, war is peace, and Trump voters are domestic terrorists.

Months of lawless riots that included direct brutal attacks on police officers and setting fire to federal buildings, state property, and private businesses are “mostly peaceful protests.” A 90-minute lawless siege on the Capitol during which there were no direct attacks on law enforcement is a seditious insurrection that necessitates an overwhelming show of military force and a lethal razor-enhanced border wall around the area where the elite sequester themselves from the deplorable rabble they rule serve.

Biden has committed to passing the “Equality Act,” which explicitly subordinates religious free exercise protections to sexual perversion. Or perhaps it won’t actually be Biden who will kill the First Amendment. Perhaps it will be an unseen Kamala Harris who in the dark of night like the unsexed Lady Macbeth will drive a knife into the heart of American freedom.

Unifier-in-Chief Biden is restoring federal funding for the dissemination of Critical Race Theory through government agencies. And Democrats under a Biden administration are gearing up with the help of gullible Republicans to usurp local control of education through a tricksy Common Core-type maneuver. Stanley Kurtz warns,

Remember, the Obama-Biden administration imposed Common Core on the country via a Rube Goldberg mechanism designed to circumvent the prohibition on federal curriculum controls. That mechanism was powered by money tucked away in the stimulus package and passed without debate. Obama hadn’t run on Common Core, and there was no national consensus in favor of it. Instead this ill-conceived experiment was imposed by stealth with the help of massive funding from the Gates Foundation, various businesses, and an education bureaucracy decidedly at odds with parents and voters.

There is every indication that this process is about to repeat itself under a Biden administration—this time in the culturally critical area of history and civics standards. The effort to create a civics version of the Common Core will be made by the “bipartisan education reform movement.”

Kurtz draws attention to a proposed “bipartisan” bill—sponsored by a Democrat and co-sponsored by 10 Democrats and one lone Republican, Tom Cole from Oklahoma—that has received too little attention:

Comprehensive proposals to create de facto national history and civics standards on the model of Common Core are in the works as well, and likely to be adopted by a Biden administration.

The text of the bill sounds innocuous enough until you remember who’s in charge of the organizations that will be creating curricula that will enable schools to get their mitts on federal dollars. What the government under a Biden administration will fund will not be curricula that conservatives like.

Leftists Exploit Violence to Cancel Conservatives
b
a
x
r