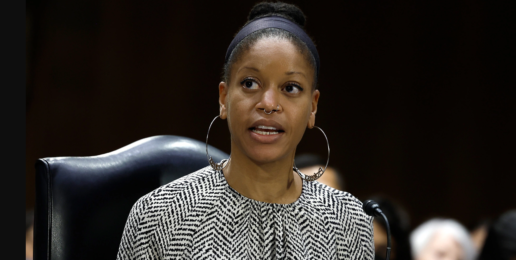 In a U.S. Senate Judiciary Committee Hearing on abortion rights on Tuesday, July 12, 2022, UC Berkeley professor and far leftist (but I repeat myself) Khiara Bridges demonstrated that even smart people can be wildly ignorant. She is also an arrogant ideologue who fancies herself clever.

Bridges pounced on a question by Senator Josh Hawley in order to lecture him on her assumptions about sexuality, which she apparently believes are facts. She had used the Orwellian Newspeak term “people with a capacity for pregnancy” to refer to women of childbearing age. In response, Sen. Hawley asked, “Would that be women?” That’s a question my seven-year-old grandson could answer correctly but not Bridges. She haughtily replied,

Bridges used multiple Newspeakian terms, which need to be translated into plain English. Since leftists have invented an entire lexicon to advance their alchemical superstition, let’s call the language used by transcultists in Transtopia “Transspeak.”

“Transmen” is the next term Bridges used. In Transspeak, a woman who wishes she were a man and pretends to be one is called a “transman.” Her delusional feeling about her sex is called her “gender identity.” And in Transspeak, “non-binary people” (“enbies” or “enbys”) is a term used to refer to people who pretend they are either both sexes or neither. Their delusional feeling about their absence of a sex or excess of sexes is their “gender identity.”

No one, however, should allow the coercive, bullying tactics of transgressives convince them that they have an ethical or moral obligation to use Transspeak, in which lies intended to deceive are embedded. Anyone who has a commitment to truth, has an obligation not to lie.

Now, back to Bridges.

Hawley then points out the intellectual incoherence of leftists’ referring to abortion as a women’s rights issue while claiming men can get pregnant:

So, this isn’t really a women’s rights issue.

We can recognize that this impacts women while also recognizing that it impacts other groups. Those things are not mutually exclusive.

Did you notice what she did? That tricksy Bridges just changed the claim feminist harpies have asserted since 1973. They didn’t claim abortion “impacts” women. Feminists have claimed for decades that abortion is so completely and solely a women’s issue that men are not permitted to speak about it.

In addition, Bridges now claims that men can get pregnant. If that were true, then the issue would be every bit as much a men’s issue as a women’s issue and would impact them in identical ways.

Obviously, Bridges is wrong. Abortion can’t actually be solely a women’s rights issue—as leftist women have shrieked in the streets for years behind signs of uteruses and fallopian tubes—and also a man’s issue, just as I can’t be solely white and also Asian.

Following the “logic” of her argument, Hawley asked,

So, your view is that the core of this right then is about what?

Then the wheels began to fall off Bridges’ handmade, jerry-built “logic” train. She said:

I want to recognize that your line of questioning is transphobic, and it opens up trans people to violence.

Say what? Asking about which sex has babies and if abortion is a woman’s issue is “transphobic” and opens up sexually deluded people to violence? Does she have any evidence that Hawley’s two questions are shaped by an irrational fear or hatred of those who identify as the sex they are not?

If asking questions that challenge philosophical, ontological, or moral claims causes violence, wouldn’t then all moral claims open up some group to violence? Wouldn’t Bridges’ ugly allegations against Hawley open up to violence other conservatives who share his views?

Hawley expressed surprise at such a bizarre accusation, and with her logic train wheels shaking like leaves in a tornado, Bridges angrily accelerated, implying that Hawley’s questions will also contribute to the suicides of cross-dressers.

I want to note that one out of five transgender persons have attempted suicide.

Again, she provided no evidence.

Then with wheels flying off her train, Bridges accused Hawley of denying the existence of “transgender people.” Her proof? She asked, “Do you believe that men can get pregnant.” Hawley responded sanely with an answer backed up by science:

No, I don’t think that men can get pregnant.

With a snide laugh, she scornfully responded,

So, you’re denying that transpeople exist. Thank you.

Sen. Hawley is far from alone in believing that men cannot get pregnant. In fact, until about five minutes ago, everyone in the world and throughout history believed that, and most still do.

When Hawley asked Bridges if she treats her students’ questions in the same way she had treated his questions, she condescendingly invited him to her class, telling him, “you might learn a lot.”

Bridges was disrespectful, presumptuous, illogical, and intolerant of diverse views. And when faced with the expression of moral or ontological claims that she hates, she hurled epithets and baseless accusations. Bridges epitomizes leftist educators.

And Hawley responded just as every person should respond to trans-tyranny.

Bad News for Our Sisters, Daughters and Granddaughters