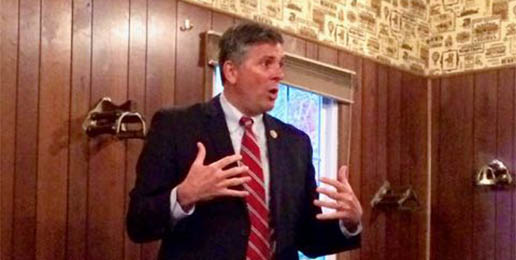 Congressman Darin LaHood, took time from his busy schedule to talk to the Peoria Patriots at the Carriage House, on the grounds of Weaver Farms in Peoria, IL on Thursday, October 27th.

He reviewed for his audience the highlights of his first year in Washington DC as an Illinois Congressman. He said it began with his introduction to a scheduled Republican gathering in DC on the same day as a tearful Speaker of House, John Boehner announced his resignation! Needless to say Boehner’s announcement overshadowed any attention that might have gone his way for the event.

He acknowledged that he has taken some ‘flack’ for his support of the Republican nominee for President, Donald Trump, and while recognizing his disagreement with some of his ‘social graces’, he is in support of Donald’s two highest priorities in his agenda. They are getting the economy moving at a rate greater than the current 1%, namely 2 or even 3%. That alone would provide the base for fixing many of the other problems.

The second priority is the appointment of Supreme Court judges. This opportunity alone that undoubtedly will befall the next president could shape the country for the next 50 years, and might even mark the end to a conservative agenda.

He then took questions from the audience, and among the hot topics were immigration, voter fraud, especially in Chicago, IL, term limits, (which he supports), creep toward the implementation of Sharia law and the growing Muslim influence in government and politics, mentioning it be more than a religion but a rule of life, controlling every aspect, from the top down.

He received much thanks for his work to date and was encouraged to ‘stay the course’ on his agenda.

As a background, Congressman Darin LaHood, was born and raised in Peoria, and serves the constituents of the 18th District. He was sworn in the US House of Representatives on Sept. 17th, 2015. The 18th district spans 19 counties which include our Trip-county area. His area is home to almost 710,000 constituents. Prior to his election, he served 4 years in the Illinois Senate and more than nine years as a State and Federal Prosecutor. Prior to that he worked for the US Dept of Justice as an Asst. US Attorney in Las Vegas, Nevada.

Congressman LaHood and his wife Kristen currently reside in Dunlap and are the proud parents of three sones, Mckay, Lucas and Teddy.